A quick refreshment of the topic for those of you who have been left as much as possible by the foreheads of school from literature classes: Animal Farm tells the story of a farm from which animals expel their human master. Instead of being exploited by him as an obedient proletariat, they begin to rule nicely on their own, equally and justly, to work together to create a complete animal paradise on earth.

Of course, it turns out absolutely terrible.

I confess without torture that I have never been a great supporter of compulsory reading, but Animal Farm is, in my humble opinion, one of the few books that are worth paying attention to in high school. Above all, a quick and easy reading (after all, it’s about animals) elegantly presents readers with a complex topic, such as efforts to create a social utopia.

The book is quite clear in its message: Even the most virtuous state ideals will sooner or later succumb to the power of greed. As long as there are people in the world who want more than others, there will be those who need to take it more. Which, of course, isn’t a bad foundation for game adaptation at all. The template can serve as a gauntlet to players: “So you think you could create a political utopia? So show yourself!” 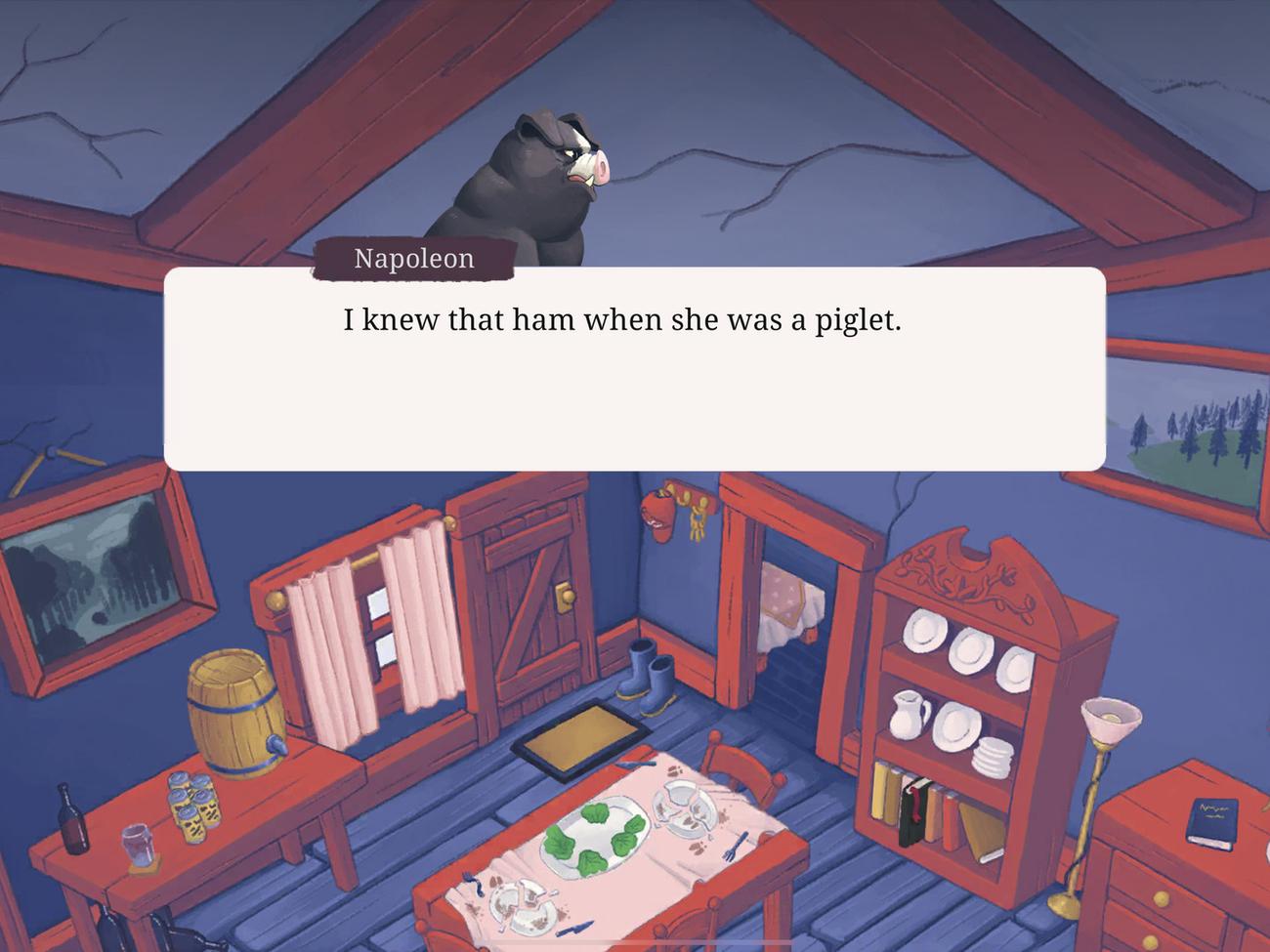 But Orwell’s Animal Farm does not have such great ambitions. It is not a political-building strategy, but a simple clickable adventure to a visual novel. You will spend your time in it, choosing answers to various moral and political dilemmas in an environment of beautifully painted screens and trying to survive on your more or less utopian farm for up to seven years.

What you encounter and do not miss during that time depends on your decisions: How much hay you sow in the autumn and how much you hide for the winter, which building you repair the roof, which animal you let work on the construction of the mill and so on. Under your hands, you gradually develop your own concept of animal paradise – or hell.

Respectively, somehow it should work. As in the communist statehood, realization in practice lags behind both front legs.

Orwell’s Animal Farm suffers from practically only one big mess, but it is absolutely crucial for the game of its genre: it is the opacity of game mechanics. The gameplay itself is simple, just click on the predefined options. But often you don’t know how the choice will be reflected in the game, and at the same time how many times you know what you want to cause in the game, but you will have no idea how to achieve it. 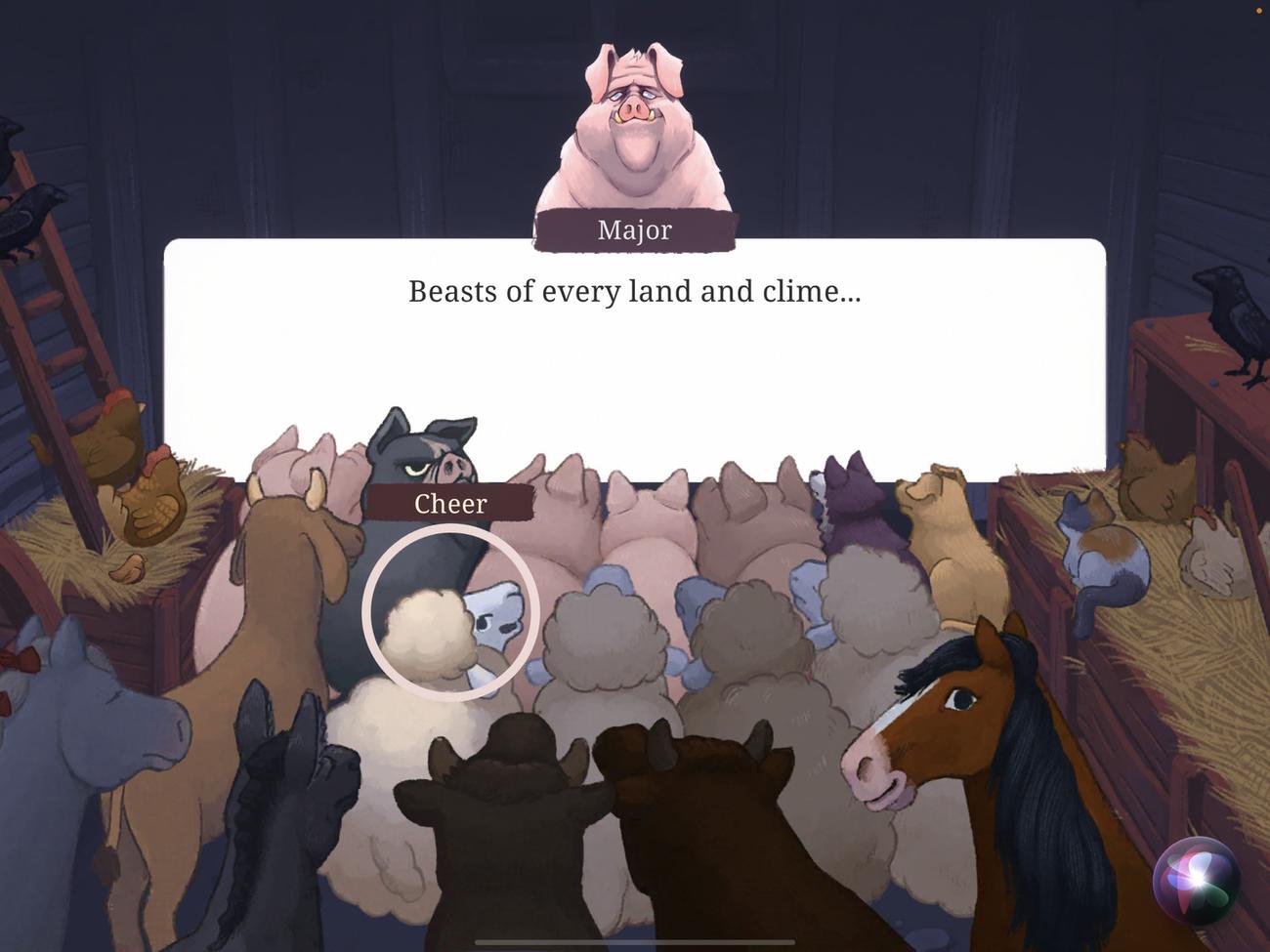 What am I doing here?

Orwell’s Animal Farm has no tutorials or clues – it doesn’t even seem to need them. But soon you will start to encounter one ambiguity after another. For example, animal icons have a red-green background that changes according to your choices. But what do they signal? I don’t have a pair, even after two finishes. Is it supposed to be morality? Lives? Fatigue? And what happens when the icon fills with red? I have no idea, although it has happened to me many times.

Or from another barrel: One of the factors you have to watch out for when playing is the level of animalism, or the doctrine of the seven animal laws. But what exactly does high or low animalism mean for the life of my animals? Does it determine the degree of their fanatical belief in laws, no matter what they currently sound? Or, on the contrary, their education, which would make it easier for them to see the lies of pig cadres? I have no idea. In the second act, I deliberately ignored animalism, and the only thing that changed was the mood of the animals in the final evaluation at the end of each year:

And this groping in the hidden mechanisms of the game wraps like a snowball. The number of moves in the seasons is volatile. Sometimes you alternate all the animals evenly during the season, sometimes the hens are in a row three times in a row. Sometimes the game will offer you the opportunity to trade with people, other times it will not be discussed at all. Sometimes you have a choice of all the animals to solve problems, just so that the game halves their register by the next time you solve the same problem. There may be some sophisticated algorithm behind it all, but when the Boxer draft horse suddenly disappears from the screen and you have to drag winter supplies a little bit with lazy Molina without the game telling you why, it’s rather frustrating.

Chaos also reigns in decisions as such. Some events are inevitably set by the model (pigs take over the government, no matter what you do), others can be influenced by your choices, and then there are decisions that will not affect anything at all. And of course you don’t have a chance to know which are which. No matter how much I questioned pig management at meetings, the game always waved. And no matter how much I supported Comrade Kuliš’s political career, I never managed to prevent his exile.

Thanks to Google and the final screen of the game, I know that the story can branch really interesting, for example in Kuliš’s case. But because the choices that really affect the game are mixed in one salad with those that don’t matter at all, it’s almost impossible to decipher what you have to do to get to the desired end. Different animals rule, run, or even die, and you usually have no idea why. 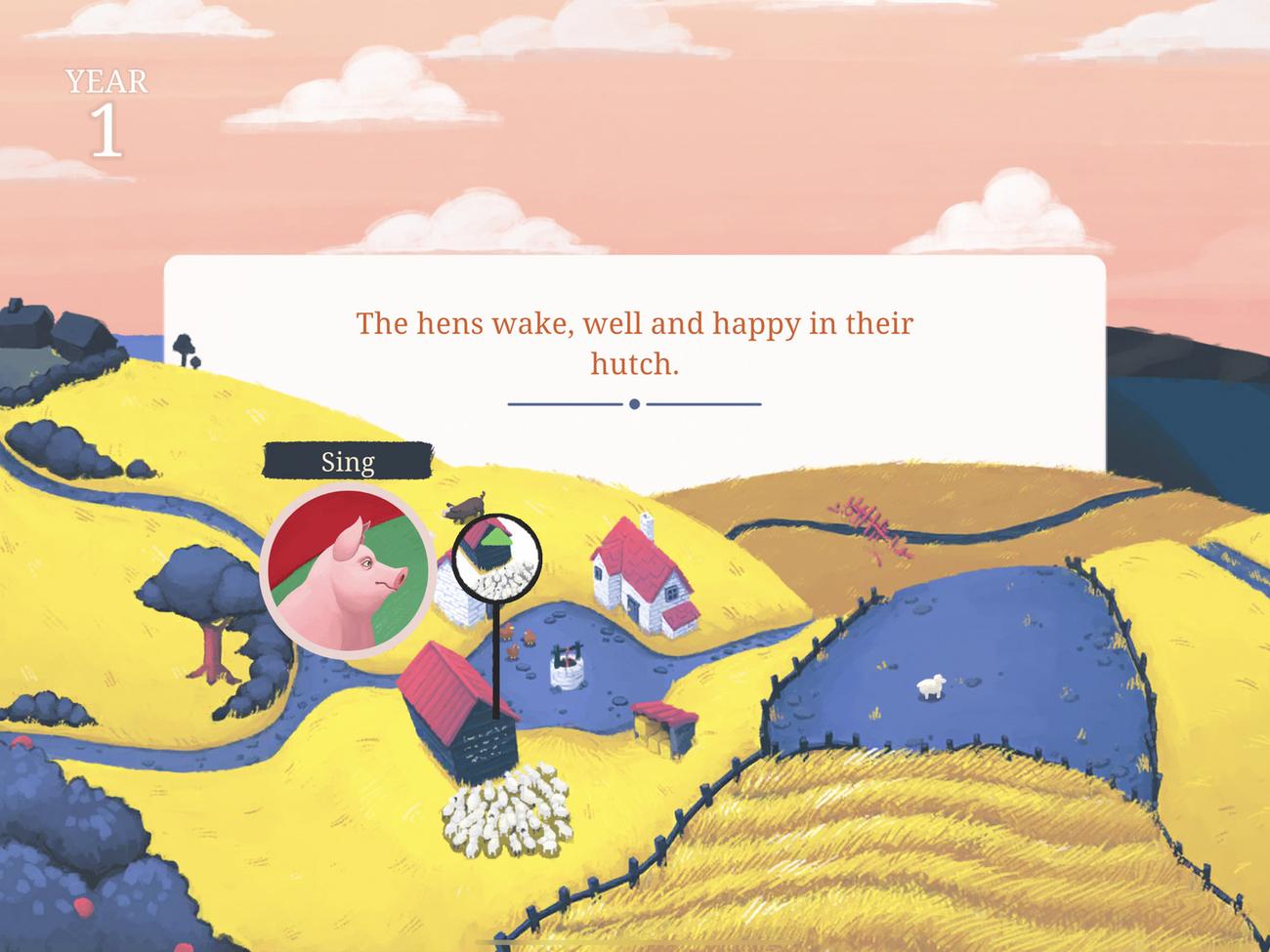 Brothel in its own ranks

Unfortunately, adventure shoots into the paws of one more thing, and that is regular errors in scripts. I would be forgiving of the smaller ones, as if Comrade Napoleon suddenly rose from the dead to comment on the new flag of the Republic of Animals in a line of dialogue. But it was a bit worse when he died suddenly in another game. At one point he and Lupine were singing an animal anthem when suddenly, “Comrade Napoleon died in battle!”

There would be a number of other minor improvements. For example, the game Animal Farm does not contain profiles, which is a bit curious in a story adventure. Lets you waste resources on improving things that are already being maximized. The notebook, in which your progress in the story is recorded, will be used on the first page to splay out the deaths of the main characters – which can, of course, be prevented, but even so, why not make that information visible until the milestone is unlocked? And so on, and so on.

So is Orwell’s Animal Farm a complete mess? Well, it’s not, at least not quite. If you avoid scripting errors, this is a game that is unnecessarily confusing rather than downright broken.

In addition, he has at least two aces up his sleeve: a wonderful audiovisual treatment and an undeniably strong theme of the original, which certainly does not embarrass (although most of the scenes in the book are reduced to the minimum necessary). Maybe it’s the potential of the source material that makes the shortcomings of adaptation feel all the more.

For 10 euros, which Farma costs on Steam, I don’t want to be too lenient, but at a discount (or in the case of a cheaper mobile version) it’s still not a bad canapé. One game will take you about two to three hours, but the game of course counts on you not staying in a single attempt. And if you’re willing to be patient and go against the game and its user hostility, you’ll probably get some of the fun out of it. Especially if you like a template.

But if you are considering using Orwell’s Animal Farm to excuse yourself from reading your graduation book… Please read it. On the one hand, this is probably one of the few cases where the design is less confusing than an adaptation, and on the other hand, the commission will not stare at you confusedly as you tell her how Boxer and Molina lived happily on the farm until death and all the pigs ended up cut into slices.