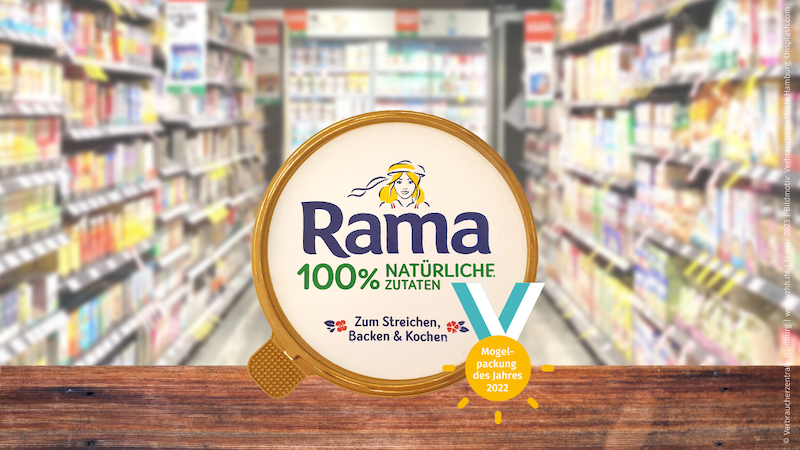 German consumers have voted Rama the deceptive package of the year 2022. The decision was made as part of a vote by the Hamburg consumer advice center.

Consumers in Germany have voted: Rama is the deceptive package of the year 2022. The Hamburg consumer center recently published this in a official notice announced.

Since last year, the well-known Upfield margarine has been sold with 100 grams less. Instead of 500 grams, the cup now only contains 400 grams of spreadable fat. However, the price and the packaging have remained the same. This means that the product has become 25 percent more expensive.

According to Armin Valet from the Hamburg Consumer Advice Center, the manufacturer Upfield went too far and Rama more than deserved the vote for deceptive packaging of the year. “If the contents shrink but the pack doesn’t, consumers have little chance of noticing the less-in trick.”

The procedure is particularly bold because spread fat is a food that is often bought and is almost always offered in 500 gram cups, says Valet. Never before had the consumer advice center received so many complaints about a product.

Rama: The environment also suffers from the sham

It’s not just the customers who are left behind, Valet continues. The environment is bad too. Upfield now needs half a million more plastic cups to fill 1,000 tons of Rama.

The consumer center therefore sees it as its obligation to advocate responsible procurement, use of resources and production.

Last year, the Hamburg consumer advice center collected more complaints than ever before, as more and more customers complained about the “less-in-shame”. More than 700 complaints were received in August, September and October 2022 alone.

Based on all the entries, the consumer advocates then determined a shortlist of the products that have become significantly more expensive in the past year with reduced filling quantities and, in some cases, additional price increases.

Afterwards, consumers could vote online and choose the deceptive package of the year 2022. In addition to Rama, there were four other products to choose from.

With the appointment of the deceptive package 2022, the consumer advice center does not only want to draw attention to the prevailing trickery. Consumers should also be actively protected from hidden price increases.

Therefore, the consumer advocates have filed a lawsuit against Upfield. If there is suddenly 100 grams less spreadable fat in the identical cup without any special notice, that is clearly misleading.