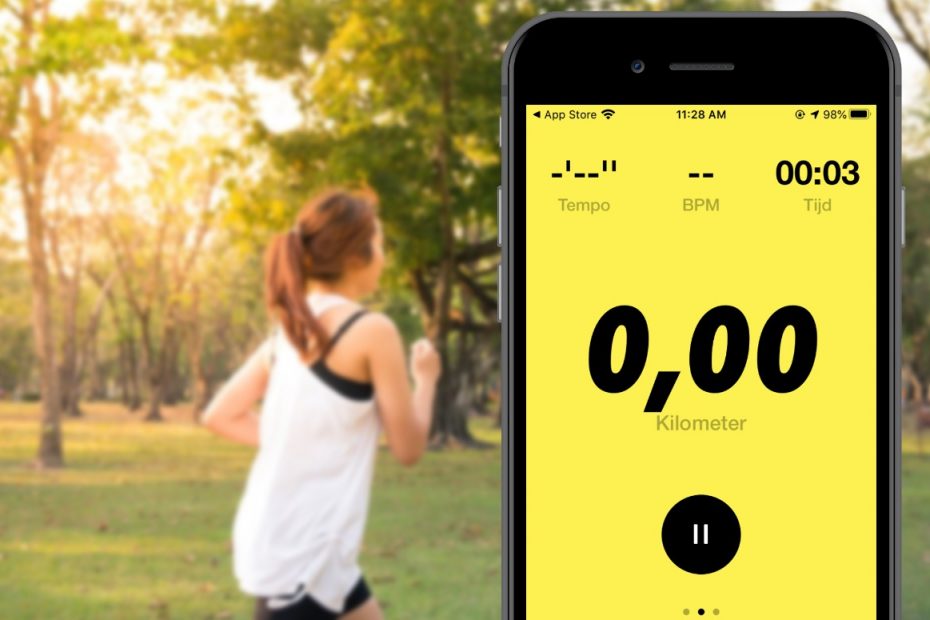 Are you just starting to run? Or are you training for your first match? No matter how trained you are, a good running app will always come in handy. In this article, we list five excellent running apps.

The great thing about running is that you can do it anytime, anywhere. You are not dependent on a gym, teammates (although running together can be motivating) and it costs nothing.

Almost nothing then, because a good pair of running shoes will certainly come in handy. Also required: a healthy dose of motivation and a little room to move. A running app is not a hard requirement: you can also do your laps without it.

For many people, however, it is a nice helping hand. A good running app not only keeps track of your route and times, but also tries to help you further on the basis of training schedules and tips, for example to prevent injuries.

The app must also work simply. At the start of the round, you don’t want to fiddle with complicated settings, but just start with 1 push of a button. These 5 running apps meet those criteria as far as we are concerned.

RunKeeper is one of the most popular running apps in the App Store, and with good reason. The application is a running coach, motivator and stopwatch in one. Every step you take is recorded and after your training you will see an overview of the route and relevant statistics.

While running you can turn the coach function on / off as you wish. Are you not waiting for this? Then link Apple Music (or Spotify) with RunKeeper. This way you can listen to your favorite music on the go. Extra nice is that the songs are played based on your tempo. During a sprint, the music also goes off faster.

You can also link other apps with RunKeeper, such as Fitbit, Zombies Run and MyFitnessPal. With a little configuration, you can therefore use RunKeeper as an umbrella sports app, instead of ‘just’ a running buddy.

RunKeeper is free to use, but you have to pay to unlock all features. A monthly RunKeeper Go subscription costs 9.99 euros. If you pay for 1 year in advance, you will be 39.99 euros lighter. Are you a beginner looking for a running app? Then you can move forward with the free version.

You can not only train in Nike gear, but also with the brand. In addition to the popular Nike Training Club fitness app, Nike also has an excellent running app: Nike Run Club. As you may expect based on the name, this app is especially nice when you go for a run with friends. You form a club in the app.

Nike Run Club combines competitive spirit with fun and convenience. The app is very nice and simple: you can start the training with a few taps on the button. While running you will be kept informed of all relevant statistics and you will see exactly how fast you are going.

A nice addition is the collaboration with Headspace, a well-known meditation app. When you activate this function, some coaches motivate you to reach the finish line. Also cool: in Nike Run Club you can watch training of athletes sponsored by Nike. This gives you a glimpse into the kitchen of world toppers.

Furthermore, Nike Run Club is equipped with all the functions you would expect from a running app. For example, you can easily link the data with the Apple Health app and set up your own music. The app can also be used with just an Apple Watch, so you can run without an iPhone in your pocket.

Strava was a great running app for years. Basically it still is, as long as you’re willing to pull the wallet. Since 2020, a lot of functions that were previously free have been placed behind a paywall, for example the beloved ranking views.

To become profitable, Strava made the decision to direct users towards subscriptions. There’s not much wrong with this in itself: nothing is free and Strava staff also have to pay the rent. However, this has made the app less suitable for novice runners.

Strava is really made for experienced (outdoor) athletes. Do you belong to this group? Then you get a complete sports package with Strava. For example, you can analyze your own training sessions extensively, and even divide them by segment.

This allows you to see exactly in which part of the route your performance deteriorated, so that you can focus on this next time. This way you gradually build the perfect run, which in turn has a positive influence on your place in the rankings.

Just like RunKeeper, Strava also works independently on the Apple Watch. You can try the very comprehensive running app for free, but as mentioned, you end up paying for most features. An annual subscription costs EUR 59.99. A (one-time) monthly subscription costs 7.99 euros.

Do you have an Apple Watch? Then the Workout app from Apple is a practical and completely free alternative to the running apps in this overview. All information about your run is stored on the Apple Watch and transferred to the Activity app on your iPhone. The options are a bit more limited, because Workout is a general exercise app for all kinds of sports.

You can, however, invite other iPhone users to a competition. So don’t expect such an extensive amount of statistics and info or integration with music services. However, if you are looking for a great free alternative to paid running apps, then Apple’s Workout app is more than enough for the hobby runner.

Nike competitor Adidas also has its own running app. adidas Running, previously known as Runtastic, is especially nice when you’re willing to pay. The free version remains on the surface in terms of possibilities.

As soon as you start paying, Adidas Running gives you, among other things, ‘access’ to a coach who encourages you not to give up while running. It is also possible to download nutrition plans, you will receive special training plans and you can keep track of how (not) nutritious you have eaten in adidas Running.

After the workout, all data is sent to the Apple Health app and adidas Running gives an important tip: hydrate. You also have to replenish all the moisture that you lose. Of course you can listen to a story or turn on good music while running with Adidas Running thanks to the link with music apps, including Spotify.

The running app keeps you informed of your performance every week. You can also set a new goal for yourself, for example to lose a number of calories or run a certain distance.

The App Store is packed with sports apps. On iPhoned That’s why we like to separate the wheat from the chaff and only collect the best applications. Do you want to exercise (more) and live a healthier life with your iPhone? Check the articles below to get started.