she arrives with a notch – Top For Phone 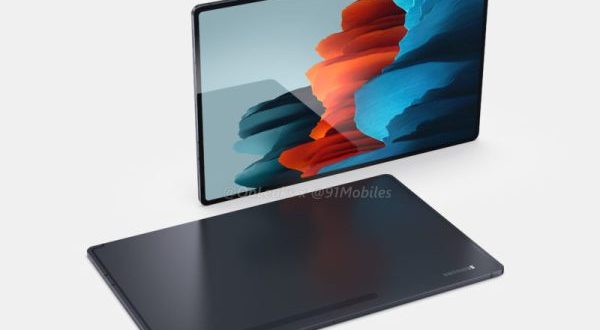 The famous leaker and prognosticator OnLeaks, in collaboration with 91Mobiles, provided us with the first renderings of the next flagship model of the Galaxy Tab S8, the Galaxy Tab S8 Ultra.
According to the images, Samsung could launch the Galaxy tab s8 Ultra with a notch in the screen.

The report of 91Mobiles indicates that the Galaxy Tab S8 Ultra will feature a small notch “indeed”.
The report claims that the notch won’t house any Face ID-like components, but instead will be design-related.
the notch will just “offer room for the front camera”.

OnLeaks says the report is not “100% complete”, so there is a chance that Samsung Ditch the notch in favor of a punch that accommodates the front-facing camera, but it’s all just speculation at this point.

Design-wise, the Galaxy Tab S8 Ultra will be similar to last year’s Galaxy Tab S7, with antenna lines, a horizontally placed rear photo module, and the magnetic stripe for charging ( and hold) the S Pen on the back.

There is no information about the launch yet. The report claims that Samsung is reportedly planning to launch the tablet sometime in November or December of this year.
However, with the ongoing chip shortage, the launch could be delayed.
Now, we could see Samsung launch the supposed Galaxy Tab S8 Ultra with the notch in the January-February slot of next year, alongside the flagship Galaxy S22 series.