Gadgets from the Stone Age 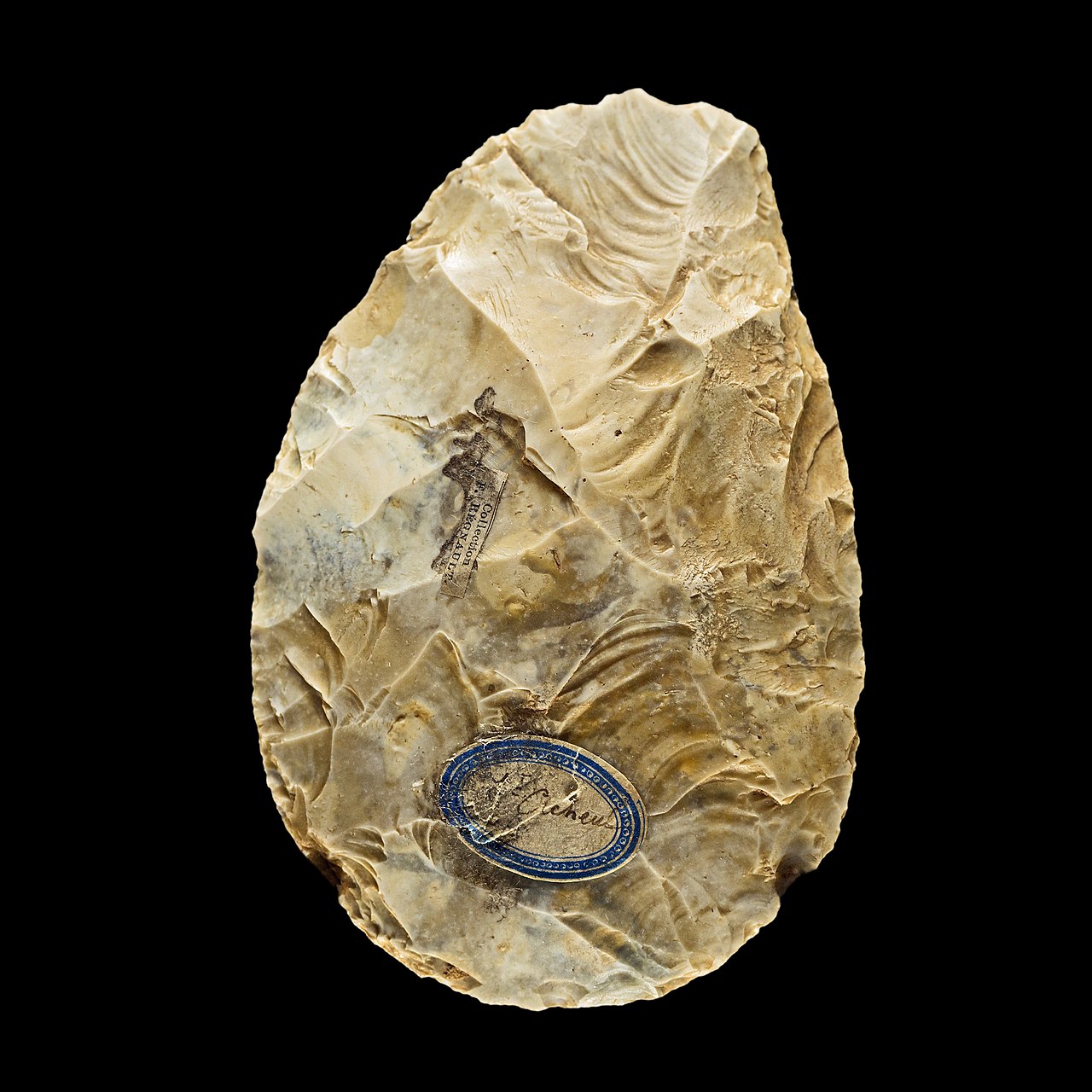 Even in the Stone Age, hunters and gatherers already carried handy gadgets with them. We have found remains of some of them. In this article we kick off the weekly series.

The Stone Age began more than 3.3 million years ago. From that time, the Pliocene, the first remains of stone tools have been found near Lomekwi in Kenya. These remains were near skeletons of Homo habilis and were then further developed by Homo erectus and, later, Homo heidelbergensis and its descendant, the Neanderthal. It is not clear what these were used for.

According to some, even Australopithecus could work stone. Modern humans, homo sapiens, did not yet exist. So we can say that gadgets and technology are older than man. Possibly even older than our genus, Homo.

Everywhere, prehistoric Stone Age sites are dotted with remnants of flint axes and the making process. The flint hand ax is probably the oldest gadget known to man and in any case much older than modern man.

This is how the Heidelberg people and the Neanderthals of the Aurignacian culture already made them. When making flint axes, which is a precise job, sharp shards are released. Later, when bows and arrows were invented, hunters were very happy with them. Because you can make useful arrowheads with it.

A hand ax is useful as a cutting and scraping tool, but you want to be able to use more force to cut down a tree trunk. That is why axes with a handle also appeared later.

Man can do little against large predators and large prey. We don’t have sharp teeth or sharp claws. But those who are not strong must be clever and many a saber-toothed tiger, mammoth and cave bear ended up with a flint spear between their ribs. Spears can also be thrown, allowing hunters to attack dangerous animals from a distance.

The first remains of spears are around 400,000 years old, such as this spear found in Germany. So also the spear is older than modern man. At first spears were only fire-hardened pointed sticks. Then came flint-tipped spears.

A revolution took place around 300,000 years ago. From that time on, tools became more and more complex. Possibly because an evolutionary leap took place. This allows us to think more abstractly. Later, towards the end of the Ice Age, a spear thrower, an atlatl, was added to the spear. This allows you to throw a spear much further. Which, of course, is very useful during a hunt or a feud with a neighboring tribe.

Flint is razor sharp, even sharper than metal. But fragile. The Neanderthals and modern humans therefore used knives with a thick back at that time. That way the blade didn’t break off when you cut with it. Making these types of knives required a lot of skill and precision. One mistake and you could start again.

These knives were used to butcher animals, scrape their skins (to make clothes) and cut off plant stems. In short: this Stone Age Swiss pocket knife was an indispensable tool for every self-respecting Stone Age person from that time.

From about the same time, around 100,000 years ago, the shell beads of the cave of Bizmoune, in Morocco, date. In total, the archaeologists discovered 33 beads. Made from sea shells. Some of the shells have been touched up with stone tools.

The archaeologists also discovered remnants of red pigment on the shells. Similar jewelry has also been discovered in other places.

The cave was located about 30 km away from the coast at the time when these beads were made from shells. Archaeologists therefore suspected that more complex social relationships already existed 100,000 years ago and that the inhabitants of North Africa had extensive contact with each other.

Between 38,000 and 14,000 years ago, these mysterious stone figurines of sickly fat women were very popular. The climate at that time, the lowest point of the ice age, was very harsh and variable. Famines were common. Researchers used to think that these figurines were fertility symbols. Until a curious connection was found.

Near glaciers, where the climatic conditions were the worst, the figurines were the most corpulent. Most of the figurines also date from the time of extreme climate fluctuations. Body fat is the best way to survive a famine. That’s why some researchers think that those figurines served as inspiration for women to become just as fat and were passed down from generation to generation.

Now a new era dawned: the new stone age. The ice age was definitely over and humanity had every opportunity to develop new gadgets.

In 2009, archaeologists in China made a spectacular discovery. In a cave they discovered pieces of pottery that are 15,000-18,000 years old. In the caves they also found remains of pigs, birds, turtles, fish, deer and small mammals.

Surprising was the discovery of rice. Possibly this was wild rice, but if this is cultivated rice, agriculture already existed during the ice age. That would be a very spectacular discovery, because until now agriculture was only believed to have been invented around 10,000 years ago.

We do know that the inhabitants of the cave probably did not lead a wandering existence. Pottery, let alone a potter’s kiln, is not practical for nomads to carry around, as it is heavy and fragile. So there must have been an abundant source of food nearby. Even older pottery, around 20,000 years old, dates from a cave in Jiangxi province.

In the Judean Desert in Israel, archaeologists discovered an intact woven basket more than 10,000 years old in a cave. This basket had a capacity of around 90 litres. Archaeologists think they were probably used to store things like food.

Before pottery came into vogue, several thousand years later, woven baskets were the only way to store food.

Only the bone-dry conditions in the cave where it was found allowed the basket to survive. We therefore know that people in the Stone Age woven baskets and possibly other things as well. Because flax fibers have been found in a cave in Georgia that is more than 34,000 years old. Indeed, linen is a lot more comfortable than an animal skin.

The people of the Stone Age probably had even more gadgets than this, but made of perishable materials, such as leather, wood and wicker. So this basket was a lucky hit. Conditions like in this cave are rare. Only stone, bone, metal and ceramics survive the centuries. Softer materials perish. In the next episode we look beyond the Stone Age.