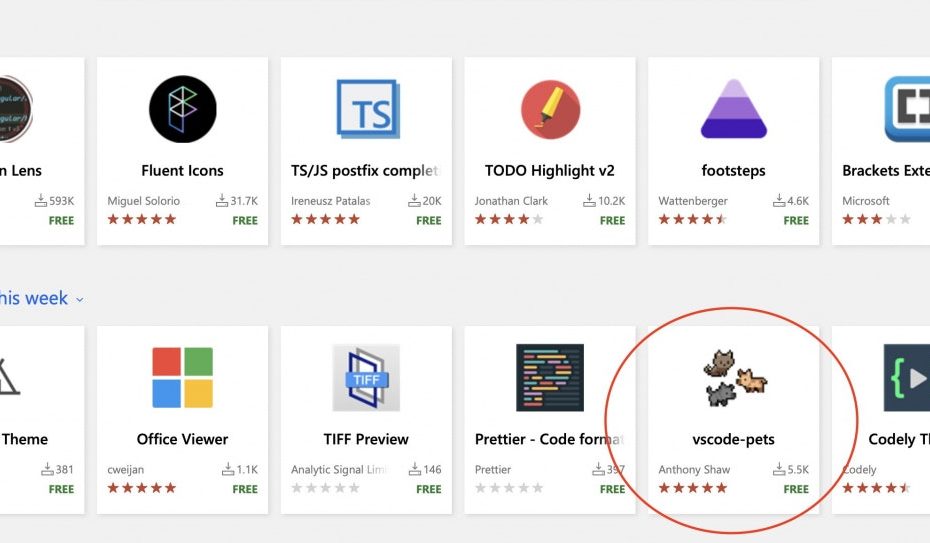 Does anyone remember Karl Klammer? There is now an extension for Visual Studio Code that brings either the paper clip from Microsoft Word or a small pet into your code editor.

There are tons of useful extensions for Microsoft’s popular code editor – and some that are less useful but fun. VS Code Pets belongs more to the second category. VS Pets is in good company with VSinder, a dating extension for developers, and VS Code Stories, a stories format for Visual Studio Code. The extension gives developers a pet in their code editor – you have the choice between a small dog, a cat, a snake and Karl Klammer, the paper clip from Microsoft Word of the 90s.

VS Code Pets was developed by Anthony Shaw. Shaw works for Microsoft on projects around open source, Python and Azure. At the beginning of his work for the software manufacturer, he was given the option of how he wanted to improve VS Code and Azure. He presented his extension in a not very serious Twitter thread:

Day 1 at Microsoft- “Your job is to work with open source communities to improve @code and Azure for Python users “” This role is flexible, you choose the path “

Day 45 at Microsoft- “maybe we should have been more specific.” pic.twitter.com/pSnqOQEmp9

VS Pets has not yet reached version 1.0. The extension can already be found on the VS Code Marketplace. After the download is complete, you can use the “Start pet coding session” command to manage your pet vscode-pets.start appear in your editor window. For example, you can throw a ball for the animals; the command required for this is vscode-pets.throw-ball. Clippy, as Karl Klammer is called in English-speaking countries, also plays with the ball – before implementing this ability, Shaw asked again how the paper clip would catch it.

Important questions this morning. If @TheClippy were to hold a ball– where would it hold it? Also, yes the collision detection needs work. I’m still a beginner with the JavaScripts. pic.twitter.com/gRDPcnhG7y

If you choose the cat or the dog, you have the option of choosing between different coat colors. The snake is only available in green, Clippy, true to the original, only in metallic. The cat, dog and snake media assets are from itch.io, the clippy asset was added later. A contributor designed it especially for VS Pets. Anyone who wants to participate will find it Repo for the project on GitHub.