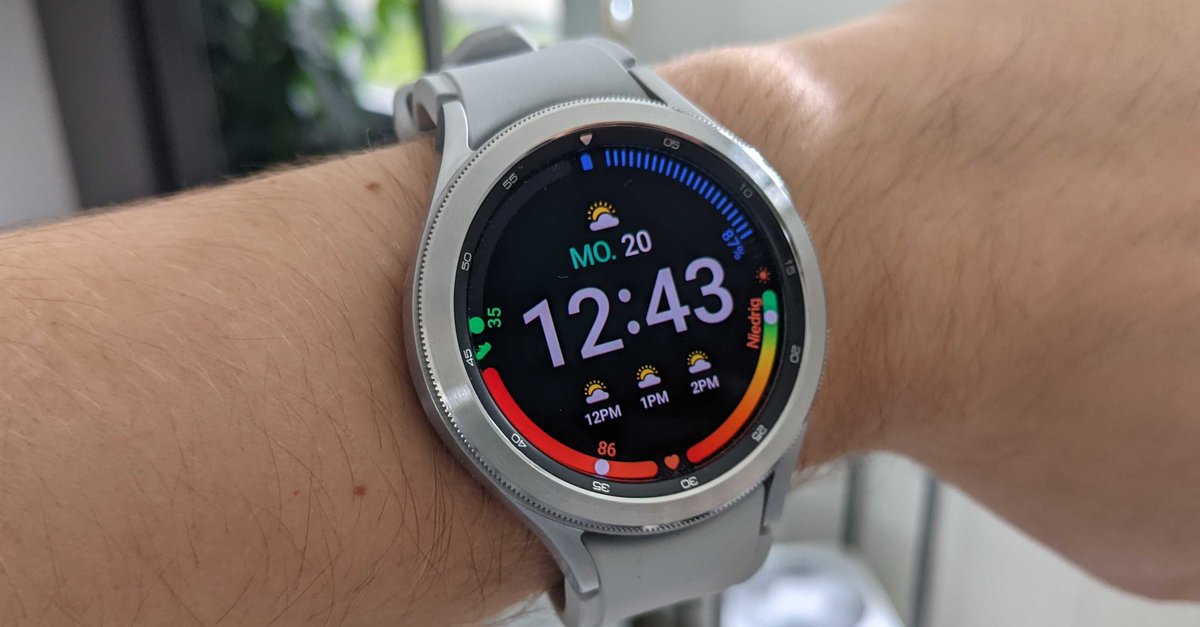 The Galaxy Watch 4 is equally important to Google and Samsung. Google hopes to be able to revive the smartwatch division with Wear OS 3.0 and Samsung wants to become dangerous through better interaction with the Apple Watch’s own Galaxy smartphones. The test of the Galaxy Watch 4 Classic showed that there is still a lot of work to be done.

The Samsung Galaxy Watch 4 Classic was fundamentally convincing in the test. Pretty much anything Samsung can influence turned out to be excellent. This includes the entire hardware with the choice of materials, the display, processor and range of functions. The watch looks great, sits well on the arm, is easy to use and basically self-explanatory. The Google apps like Maps work great and streaming music via YouTube Music is great.

With the software, however, Google and Samsung still have to go a long way. Wear OS 3.0 doesn’t seem finished at all. It’s partially unstable, the Google Assistant is missing, and the battery life could be even better. The Samsung compulsion for certain functions is also not nice. But these are all things that Samsung and Google can improve over time.

For me, the Samsung Galaxy Watch 4 Classic is currently the one best android smartwatch on the market – if you have a Samsung smartphone. But even without a Samsung device, you can have a lot of fun with the watch, as I have noticed myself. At its core, however, the software still needs some fine-tuning. The price of 399 euros for the model we tested with 46 mm and WiFi is completely okay. It even sinks slightly, making the watch more and more attractive.

Design and workmanship at a very high level

There is one thing that deserves praise for Samsung. The Galaxy Watch 4 Classic just looks beautiful, it is perfectly processed and feels absolutely high quality. I also like the new bracelet, which bridges the gap between the bracelet and the watch. I also don’t mind that the watch looks bigger than it actually is. For me this is a coherent concept and especially the version in silver with a light gray bracelet just looks great.

I also noticed something very positive about the bracelet of the Samsung Galaxy Watch 4 Classic. The plastic consists of a new mixture. It looks much more valuable in my eyes and is also softer. Compared to much older watches like my Gear S3, there are worlds in between. For the first time I have don’t feel the need to change the bracelet. But that would be possible without any problems. Any 20mm bracelet fits.

The rotating bezel is only installed in the Classic version of the Galaxy Watch 4. As with the earlier Samsung smartwatches, some of the watch can be operated with it. But the bezel also simply ensures that the watch looks very valuable. With the hardware, Samsung did an excellent job.

Another highlight of the Samsung Galaxy Watch 4 Classic is without a doubt the display. The 46 mm version measures 1.4 inches and has a resolution of 450 x 450 pixels. the Brightness and sharpness are excellent. No matter whether in bright sunlight or at night. The brightness sensor works precisely and adjusts the display so that it can always be read comfortably.

I have been using the watch every day for almost three weeks now and have had it on my arm even when doing extensive work in the garden. There are no signs of wear and tear on the display. In general, the watch looks like new after the test period. I’ve had completely different experiences with predecessors. My Galaxy Watch Active 2 had scratches on the display after just a few days, although I basically didn’t do anything with it.

Samsung has said goodbye to Tizen and is switching to Wear OS 3.0 from Google with the Galaxy Watch 4. At first glance, this is a gigantic step, but one that you hardly notice as a user. Samsung has Wear OS 3.0 namely “One UI Watch 3.0” pulled over and simply designed it the way you know Tizen. The operation is basically exactly the same. So you can find your way around immediately and have the great advantage that you can now access the Google apps.

At least in part. At the current stage of development, you have access to the Google Play Store, Google Maps, YouTube Music and many other Google services, the But the Google Assistant is missing. And so you have to deal with Bixby. How is it actually possible that the Google Assistant can be missing on a Wear OS smartwatch? With Wear OS 2.0, this was firmly integrated into the system.

And then there are other restrictions. Basically you can use the Galaxy Watch 4 with any Android smartphone. But if you really want to use all functions, you have to have a Samsung mobile phone. I am currently using the Google Pixel 5 with the Android 12 beta. I cannot install the “Samsung Health Monitor” on it. This is only available in the Samsung App Store. This doesn’t work with APK either. So I can’t measure an EKG or blood pressure. Anyone who owns an iPhone is completely lost. The watch is no longer compatible with this at all.

But if you have a Samsung smartphone, such as the Galaxy S21, for example, the Galaxy Watch 4 Classic is the perfect complement. The smartwatch no longer feels like an accessory, but is closely connected to the smartphone. Settings from One UI are also transferred from the smartphone to the smartwatch. If this were possible with any Android phone, a dream would come true for many.

Smartwatch gets stuck now and then

Basically, the Samsung Galaxy Watch 4 works very quickly and is stable. In some situations, however, I noticed problems. the Watch crashes on me oftenwhen I remove it from the charging puck after it is fully charged. At first it does not react and then simply switches itself off. At least the screen is black. After waiting for a while, I have to restart the clock with the push of a button. That happened to me four times during the test period alone.

The watch also lost the Bluetooth connection to the smartphone from time to time. Then I had to re-establish the connection manually using my cell phone, even though the two devices were within range. I always noticed that when suddenly there were no more notifications at all. Both errors can be fixed with a software update.

The range of functions is huge

With the Samsung Galaxy Watch 4 you can basically do anything. It can measure the pulse, analyze sleep, measure stress, count steps, measure blood pressure, take an EKG and measure blood oxygen. The possibility to analyze the body composition is completely new. This is comparable to a body fat scale. It shows how much fat mass, body fat, body water and so on you have. If you enter your weight, the BMI is also calculated.

To be able to compare the values, I used my Xiaomi body fat scale. The results were similar. So the watch already shows in which direction the body composition is going. For a precise analysis, however, you have to use a professional device.

The same applies to all other values ​​that the Samsung Galaxy Watch 4 measures. I had also worn my Galaxy Watch Active 2 for comparison. the Values ​​are all very similarbut never the same. So you shouldn’t rely too much on the clock. It is more of an indication of what the values ​​look like. The pulse measurement was very accurate. The blood pressure values ​​were sometimes very different. An expensive upper arm measuring device from my parents was used as a comparison. Sleep was also analyzed rather moderately. So there is still potential upwards.

As mentioned above, we received the larger Samsung Galaxy Watch 4 Classic at 46mm. This has a larger battery than the smaller 42 mm model. Overall, I came across one in normal everyday life Running time of just under two days. But then I mustn’t have done anything. As soon as you start recording a sporting activity, for example on a bike, or playing music via Bluetooth headphones, the running time drops to just under a day. If you use many functions excessively, then less so.

So I come on weekends when I like to ride my bike or work in the garden and wear headphones good for a day. In the evening I definitely have to connect the clock, because the juice runs out by night at the latest. The watch consumes an unusually high amount of energy in idle mode – despite flight mode.

The Samsung Galaxy Watch 4 is charged via a charging puck that is connected to a power supply unit via a USB-A cable. The latter is not included. I don’t understand somehow. The Galaxy S21 comes with a USB-C to USB-C cable. On the Galaxy Watch 4, a puck with a USB-A connector. So I have to buy a newer USB-C power adapter for the Galaxy S21 and an older USB-A power adapter for the watch? The omission of the power supply units should actually protect the environment, not burden it additionally. Here was the idea was not carried through consistently.