WhatsApp: a chatbot to motivate young people to vote in the presidential elections 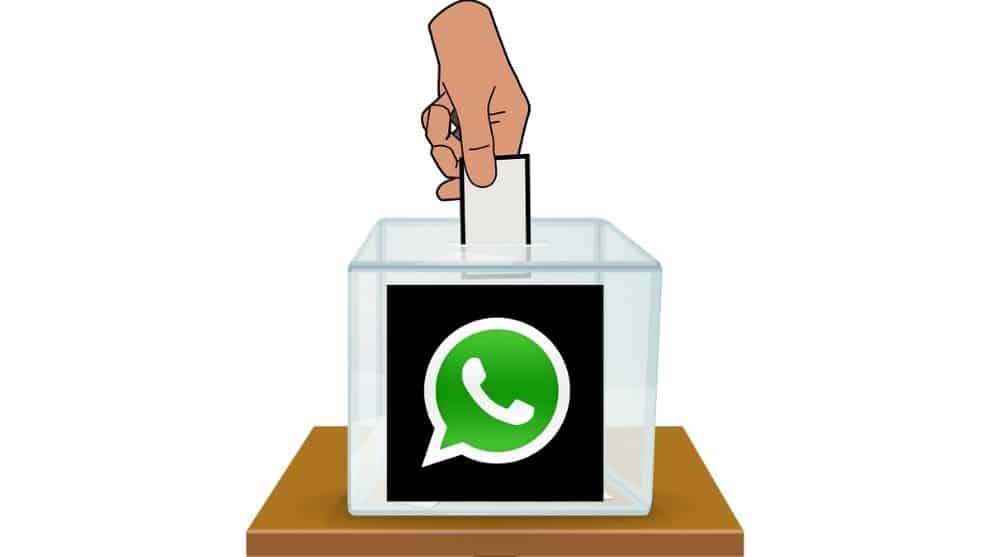 Less than three months before the first round of the French presidential election, it’s time to find the miracle solution to get everyone to vote. I have to say that abstention is getting stronger. In 2017, of the 47.5 million registered on the lists, only 37 million had moved in the first round. So how do you motivate the almost 24% of voters who remained silent at the time to speak out this year? And how to make those who are not registered on the lists take the step to do so? An association has decided to use drastic measures by partnering with WhatsApp, used each month by 36 million French people.

Voted, an NGO that fights for the defense of civil rights, has set up a partnership with Meta France since Tuesday, January 11. This one takes the form of a chatbot on WhatsApp to inform the French about the upcoming elections. The primary objective of this initiative is to fight against the non-registration of young people on the electoral lists. And we can say that there is work! According to an INSEE study, less than 20% of registered voters aged between 18 and 29 turned out to vote in all rounds of the presidential and legislative elections in 2017. Finally, according to a recent Ifop survey, more than 50% of 18-30 year olds think that they will not move to slip their ballot into the ballot boxes for the presidential election of April 2022.

Several factors could explain these edifying figures (beyond the great disinterest of many in everything related to politics). The first is the fact that young people are often poorly registered. Studies or moving away from their voting places often make voting impossible. However, there are possible approaches and the chatbot in place today will precisely help you to lift the veil on these.

Give me your hand and take my vote

In a press release, the founders of the association explained what prompted them to launch this chatbot:

This initiative is an opportunity to respond to the incorrect registration of 7 million voters, a real democratic bug in France, and to support voters on the way to the polls.

Aware of the urgency less than three months before the election, Flore Blondel-Goupil and Dorian Dreuil, co-presidents ofVoted, want, through WhatsApp, “ using digital technology in the service of democracy “. For this, the operation is very simple. It is enough for you open the messaging system and send “Hello” to the number +33 6 22 26 69 50 by following this link. 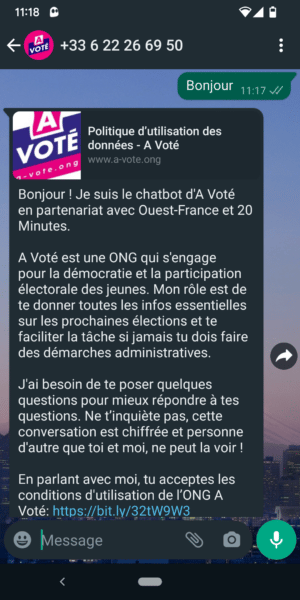 There follows a long list of questions (place of residence, department, electoral situation, etc.) which in the end must guide you through the steps to follow to find yourself up to date at the time of the elections. Most of the time, you find yourself directed to the site www.service-public.fr in order to correct your problems if you encounter any. 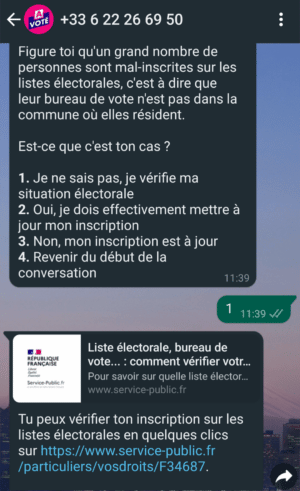 If you are up to date, you are congratulated and you are asked to talk about the inscription on the lists around you. And if you are afraid to forget the elections, the chatbot even offers to send you messages to remind you regularly. 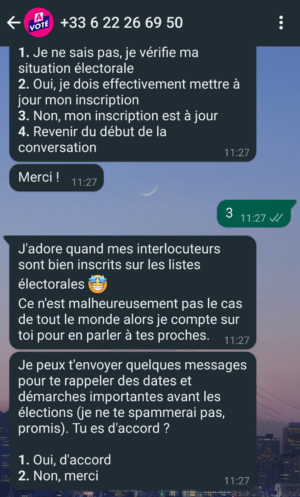 The method – although infantilizing with its colloquial language, familiarity and smileys – can indeed operate on the younger among us accustomed to this closeness. It is in any case an approach that must be supported so that democracy is respected. It should be followed by campaigns on all the group’s social networks, as announced by Elisa Borry-Estrade, head of public affairs at Meta France:

We will also offer free advertising credits on Facebook and Instagram so that this chatbot reaches as many people as possible.

Among the new registrants to come may be the one who will ascend the throne in the years to come.