Werewolf: The Apocalypse – Heart of the Forest

The table RPG from the world of World of Darkness on the video game field is traditionally represented mainly by the vampire part of Vampire: The Masquerade, for example its upcoming sequel Bloodlines 2. However, recently a bag of video games from this universe has torn. In addition to Bloodlines, a clean werewolf RPG with the subtitle Earthblood or the newly announced battle royale, which is still missing the official name, is being prepared.

By far the smallest project is the play Heart of the Forest. However, the names behind it are interesting. I mean the couple Jacek Brzeziński and Artur Ganszyniec – they both contributed to the story of the first Sorcerer. And that means something!

Heart of the Forest is a unique project that is more of an interactive book than a game in the classical sense. If I have to use any comparison, this werewolf adventure is a gamebook complete with a few RPG elements and a successful artistic representation of the atmosphere. So don’t expect any stacks of text in the review about game mechanics or technical condition, but rather story ratings, as if we were talking about a book here. 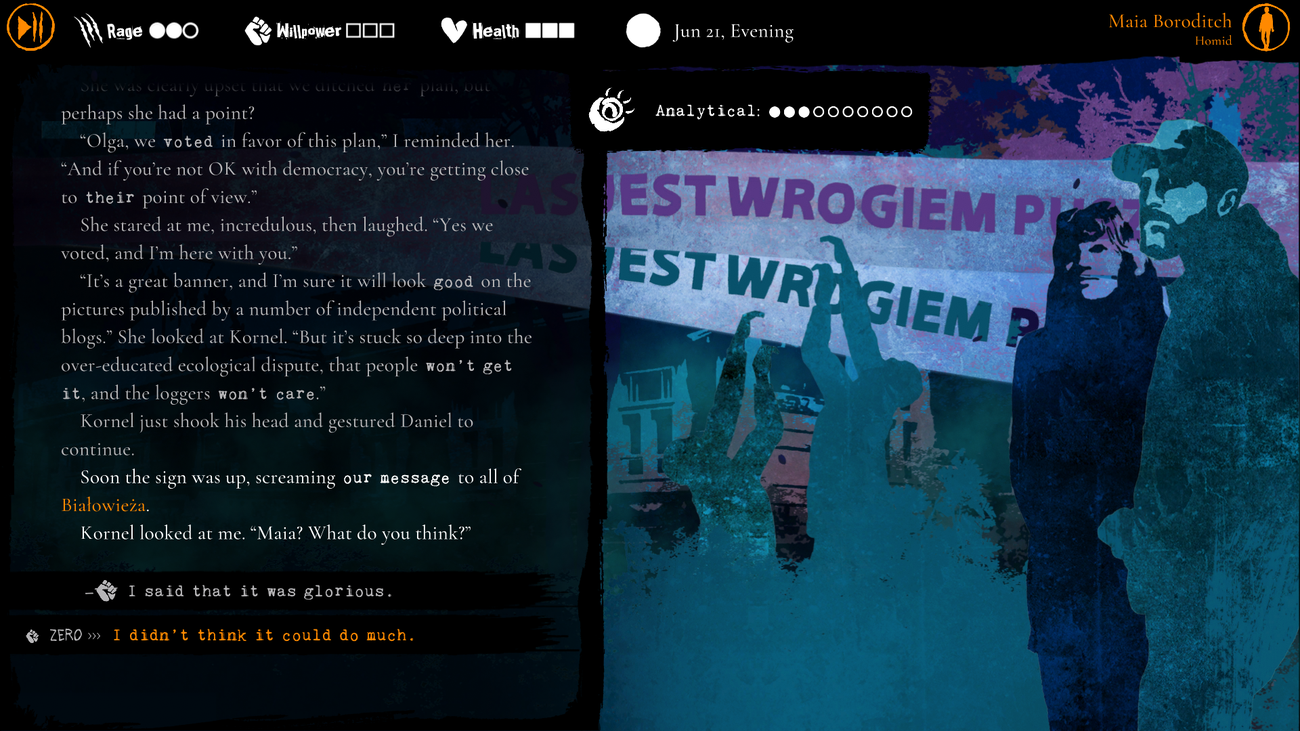 All gameplay is that after reading a page (or several pages) of text, you decide whether to go there or there. In any case, another load of text is waiting for you. And because we’re really close in scope to any book here, the key is that the text is written in a fun and readable way. We played the whole game in English and we can assure you that there are no linguistic intrigues, which could suit even less proficient English speakers.

The story itself is quite intimate, but especially in the first chapters, it offers a dense and burdensome atmosphere that is breathtaking. In the lines of the text, we follow the story of Maiy, who returns home to the Polish-Belarusian border, where she searches for her ancestors. There are a lot of weird things going on around our heroine, people in the city are looking at her through their fingers, her family is shrouded in mystery. Plus, she has very wild dreams.

Against the background of a true story

The whole story is interestingly grafted onto real events. The protagonist’s family comes from the area of ​​the Białowieża Forest stretching between Poland and Belarus. Demonstrations against logging took place there in 2016 and 2017, and this is exactly where the story takes place.

The Białowieża Forest is a place directly sheltered for dark and enchanting werewolf adventures. The battle between people and nature is taking place slowly on every side, and it might seem that Maia is the main catalyst for all this. But it’s really just an appearance, which is good. It’s nice that for once, we’re not even trying to save the world, but rather to understand the girl’s connection to the forest and the nature in it.

But it has one catch. Although we were excited about the thoughtful beginning and the gradual discovery of ourselves (or Maiy), this feeling did not last, because the last few chapters turned into an action ride. The authors did not manage the fast pace completely and completely killed the great foggy atmosphere of uncertainty.

What’s more, the suddenly lightning-fast plot doesn’t give the hero time to absorb important events. It’s fantastic when the melancholic Maia has enough space to meditate on the beauty of the city. But later he waves his hand over the corpse and actually doesn’t move a little with it. Masterfully building an atmosphere and then flushing it down the toilet is a heinous crime.

But at least you have everything in your hands all the time. The game is full of choices, where Maia has to decide what to say and how to behave. It depends mainly on her level of anger and strength of determination, because they unlock other dialogue options.

Mai’s moodiness can be corrected through dialogues, and her answers have a side effect on other characters. However, it can also affect the forest itself, which acts here as a supernatural living organism. In addition to influencing the environment, the answers are also a catalyst for the development of the heroine’s personality, but during the play we did not feel the difference between Maia brave and Maia analytical.

The game is called Werewolf, so of course werewolves can’t be missed. They even have several forms and can be switched between them at certain times. However, it has always occurred to us that the choice is absolutely clear for a given situation. A heavy backpack full of things will not carry a wolf puppy, but a really strong and fast werewolf in the form of Glabro!

This is another example of one rather unpleasant fact: All such choices in the overall context came to us more like a sauce around, just so that we can say that Werewolf: The Apocalypse – Heart of the Forest is a game. A purely gamebook form without transparent pendants would suit her much more.

But it suits her anyway. The whole narration is supported by a magnificent visual accompaniment and ambient sounds capturing what is happening in the given text window. A chill ran down our spines as we read a group of people wandering the woods, and suddenly the sound of a crunching branch startled us from the headphones. The tension could be cut thanks to the support of the sounds, and sometimes we were really driven. Which is great and really respectable for an interactive book.

In the final, we are neither completely satisfied, nor disappointed. The dense atmosphere supported by excellent audiovisual processing works more than well, the ecological theme of deforestation connected with the supernatural as if. It is a pity that some parts of the game, such as superficial, apparent choices, are not so well made. And most of all, we regret the uncontrollable pace, because the last phase of the game simply does not stand up to the rest.