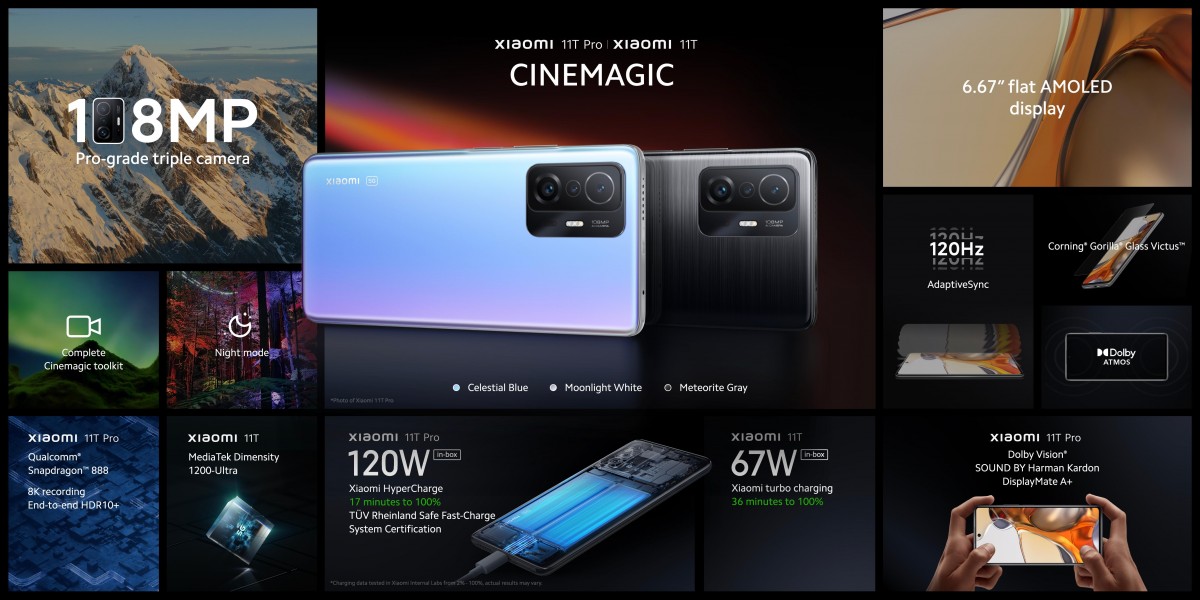 As part of today’s big event, Xiaomi has introduced several new products, including the long-awaited Xiaomi 11T series. The Chinese manufacturer has prepared up to two models for us, together with a renewed version of the previously introduced Xiaomi 11 Lite model, which received the attribute NE. The GSMAren portal informed about the new smartphones.

In preparation for this show, the company announced that the Xiaomi 11T and 11T Pro will receive up to three major system updates and up to four years of security updates.

Let’s start with the most powerful of the three new devices. The Xiaomi 11T Pro is powered by a Snapdragon 888 processor (not the newer 888+) as well as the flagship Mi 11 Pro. However, this model has a smaller, 6.67-inch display without curvature with FHD + resolution. There is also a 120 Hz refresh rate and 480 Hz touch sampling rate, HDR10 + support and at maximum brightness the display is able to reach up to 1,000 rivets.

Another major difference compared to the Mi 11 Pro is the camera’s primary sensor, which is equipped with a 108 MP lens. The 11T Pro also does not have a five-fold periscope sensor, additionally offers only an 8 MP ultra-wide sensor and a classic telephoto lens with a resolution of 5 MP.

The cable charging speed has also changed, the 11T Pro almost doubles the performance of the Mi 11 Pro. The novelty supports 120 W HyperCharge technology, which charges a battery with a capacity of 5,000 mAh in 17 minutes. At the same time, Xiaomi thought of those users who were struggling for battery life due to the insane charging speed. The company states that the battery will retain 80% of its capacity even after 800 charging cycles, which is a little over two years of daily charging. In addition, a 120 W adapter is included directly in the package. However, the disadvantage of this model is that it does not support wireless charging.

Several other details have changed, for example the fingerprint sensor is located on the side of this model and only offers IP53 certification in terms of protection, which guarantees basic resistance to dust and splashing water.

The Xiaomi 11T Pro will be available in three colors – black, blue and white, with a price tag from 619 euros for the basic configuration with 8 GB of RAM (LPDDR5) and 128 GB of storage (UFS 3.1). You will pay 40 euros more for double the storage capacity. It will be available for sale from October.

The basic model is very similar to the Pro model mentioned above. The Xiaomi 11T has the same 6.67-inch AMOLED display with a 120 Hz refresh rate and a 480 Hz touch sample rate. It also has the same combination of rear cameras on paper (108 MP primary, 8 MP ultra-wide angle sensor and 5 MP telephoto lens). However, it differs in the processor, instead of the Snapdragon 888 inside we find the Dimensity 1200-Ultra chipset. The device is protected against damage by IP53 certification.

Compared to the Pro model, the battery capacity has not changed either, we still stay at 5,000 mAh, but the charging speed has stopped at 67 W. Again, there is no support for wireless charging.

The Xiaomi 11T will cost you 499 euros in the basic configuration (8 GB RAM / 128 GB) and the version with twice the amount of storage 50 euros more. The sale will start in Slovakia in October.

The global performance ended not only with the 11T series, but Xiaomi also introduced a new member of the Xiaomi 11 family. Unfortunately, the lack of chips also affected this manufacturer, so he decided to release a modified version of the Xiaomi Mi 11 Lite . Other specifications are the same for both devices.

As a reminder, on the front of the smartphone we find a 6.55 inch AMOLED screen with FHD + resolution, HDR10 + support and 90 Hz refresh rate. In its upper left corner there is a small cutout for a 20 MP selfie camera. As for the rear cameras, the primary sensor offers a resolution of 64 MP, while the ultra-wide sensor 8 MP and third, we have a 5 MP macro camera. Xiaomi 11 Lite NE also retained the elegance of the previous model thanks to its thickness of only 6.81 mm and weight of 158 grams.

Versions with 6 GB or 8 GB RAM and 128 GB and 256 GB storage will be available, which can be expanded with a microSD card. You can charge the 4,250 mAh battery with 33 W fast charging. The device also offers a side fingerprint sensor, IP53 certification for dust and splash protection and NFC support.

Similar specifications in approximately the same price category as the 11T series models are also offered by the Realme GT 5G, Samsung Galaxy S21, older Samsung Galaxy S20 FE smartphones or new devices from Motorola – Motorola edge 20 and edge 20 Pro. If you are looking for an alternative from another manufacturer for the Xiaomi 11 Lite NE model, be sure not to miss the new OnePlus Nord 2 or Samsung Galaxy A52.

First impressions of using the Xiaomi 11T Pro: It attracts with its charging, but also with its price