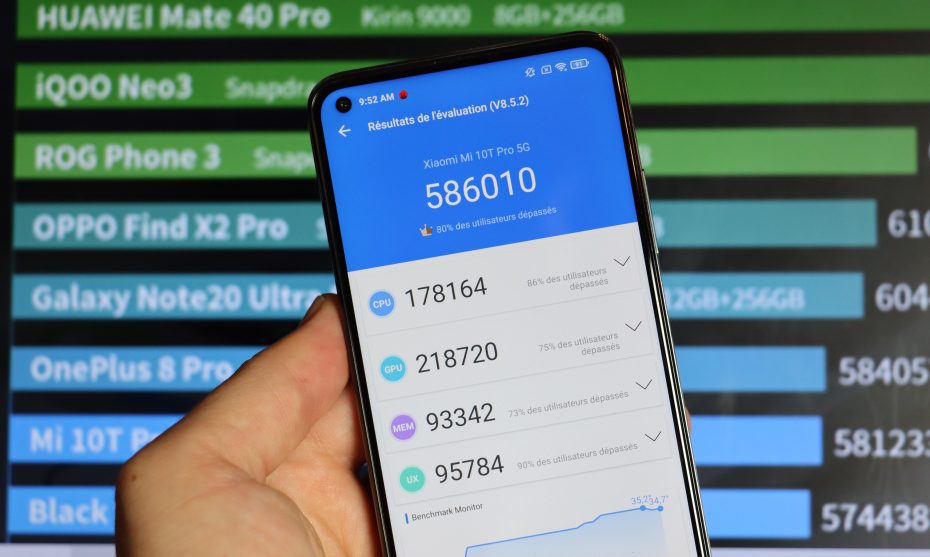 Like every month, the benchmark publisher AnTuTu publishes its ranking of the most powerful smartphones. For this January 2021 top 10 on smartphones for the month of December 2020, it is once again the American Qualcomm chips which have carved out the lion’s share, even if, as for 3 months, the n ° 1 place is taken by the Huawei Mate 40 Pro and its SoC engraved in 5 nm …

You know, at the beginning of each month, we take stock of the ranking of the most powerful smartphones according to the benchmarking app AnTuTu. The latter in fact publishes two top 10: one dedicated to the Asian market with a lot of smartphones unknown in France and another concerning the “Global Market”, devices sold in the West.

Be careful, if you want to test the power of your device, AnTuTu is not on the Play Store because of some trouble with Google. If you want to install the app, go to the official website to download the APK file: don’t take risks.

The ranking for the month of January 2021 on smartphones for December 2020 does not upset the hierarchy too much. Here it is :

For three months in a row the Huawei Mate 40 Pro has established itself as the most powerful smartphone around. But as we explained to you last month, this powerful smartphone and gifted in photos is unfortunately not recommended. Indeed, because of the trade sanctions of the Trump administration, the latter does not embark the GApps. And without Google Maps, YouTube, Gmail, and even the Google Play Store, it’s not at all suitable for non-savvy users.

Behind, the very good ViVo iQoo Neo3 is not sold with us but has gained two places since last month, no doubt thanks to software optimization. Next we find the overpowered Asus ROG Phone 3 with its Qualcomm Snapdragon 865 Plus SoC and the stylish Oppo Find X2 Pro.

In n ° 5, the Samsung Galaxy Note20 Ultra 5G of this top 10 is once again the model equipped with a Qualcomm chip and not the one marketed with us, based on Exynos 990. Also note the presence of the indestructible OnePlus 8 Pro in 6th place. In 7th place, the Xiaomi Mi 10T is one of the best quality / price ratios of the moment. The Black Shark 3 in 8th place is still present, but at the end of the ranking we see the entry of the Samsung Galaxy S20 FE 5G, which is far from being an S20 “Lite”, and the re-entry of the POCO F2 Pro: a smartphone with a surprising look, but devilishly swift.