This is how the VW ID 3 performs in the test 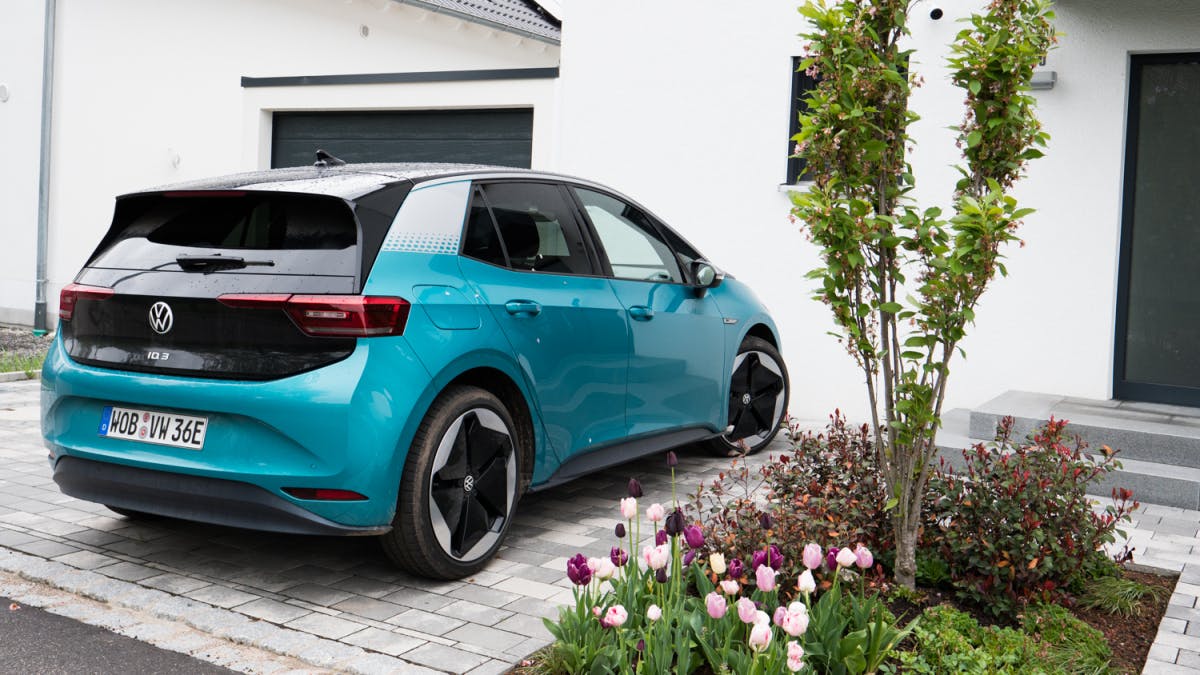 Volkswagen has achieved a real box office hit with the ID 3. But what makes the fully electric compact car so successful? We were on the road for two weeks with the “Golf of the Electric Car Age”.

For many years, German car manufacturers struggled with electromobility. Their innovative strength was usually limited to installing a battery and electric motor in a vehicle designed as a combustion engine, in order to have an electric car in their portfolio on paper. Only BMW developed an all-round successful e-car with the i3 in 2013 – only to turn its back on the subject shortly before the public breakthrough of electric mobility. Instead, the field was left to Tesla (Model 3), Renault (Zoe) and Nissan (Leaf).

It wasn’t until 2020 that the tide began to turn. Porsche set new standards in the premium segment with the Taycan, Audi and Mercedes-Benz served the SUV segment with the E-Tron and EQC – and Volkswagen put the ID 3 on the road. Since then, the Wolfsburg-based compact car has regularly occupied the top spots in terms of registration numbers – together with its SUV counterpart ID 4.

We were on the road with the ID 3 for two weeks and looked at why the first electric car from VW based on MEB (modular electric drive kit) is so popular.

Even if the term “Volks-Elektroauto” sounds a bit trite, it describes the ID 3 perfectly. While the VW Golf was one of the most popular cars in the age of combustion, the ID 3 is preparing to take on this role in the era of electromobility. And so it is no coincidence that the two vehicles are very similar both in terms of shape and external dimensions. If you will, the VW ID 3 (4,261 mm long by 1,809 mm wide by 1,568 mm high) is the ideal size: small enough to fit easily into any parking space in the big city; big enough to comfortably cover longer distances with several people. And what is even more important: there is a suitable battery for every application scenario.

There are enough people who just want a cheap second car for short journeys. High ranges or loading speeds only play a subordinate role here. This is where the VW ID 3 Pure comes into play. With the entry-level battery (45 kilowatt hours), ranges of 200 to 300 kilometers are realistic, depending on the outside temperature and driving style. For someone who commutes only 20 to 30 kilometers to work every day, that’s more than enough. Especially since the ID 3 Pure costs just 22,000 euros after the subsidy has been deducted.

For those in whom the ID 3 is the only car in their household, the medium battery (58 kilowatt hours) is recommended. It increases the everyday range of the VW ID 3 Pro to 300 to 400 kilometers. With it you can also drive longer distances if necessary. For this, the base price increases to 26,500 euros after the subsidy has been deducted.

If that is still not enough range for you, you can use the VW ID 3 Pro S. Thanks to its 77-kilowatt-hour battery, it covers an impressive 400 to 500 kilometers – putting many electric cars that are twice as expensive in the shade. Here, at least 33,500 euros are due for the basic model (with funding).

Of course, there are still countless equipment variants between the individual ID-3 versions, but the fact that the top model with full equipment costs almost double the entry-level model with basic equipment illustrates quite well that Volkswagen wants to reach as broad a target group as possible.

When it comes to design, the VW ID 3 sets accents, but is still not too daring. (Photo: Frank Feil)

VW ID 3: The thing with the “inexpensive” interior

“Yesterday I was in a shopping center for a Volkswagen promotion. You could take a closer look at the Golf 8 and the ID 3. Actually, I had already decided on the ID 3 in advance, but was then quite surprised by how cheaply it is processed in the interior compared to the Golf 8. ”This quote from a reader sums up the biggest problem with the ID 3: the Materials in the interior. When you get behind the wheel for the first time, everything looks tidy and minimalist at first. Just as you would expect from a modern electric car. There is plenty of space in both the front and back seats.

However, as soon as you take a closer look and start to press individual keys, you quickly notice that costs should be saved here and VW was willing to accept compromises in terms of quality. Above all, the cheap plastic (there is no more charming way of saying it) on the dashboard and the side panels does not really fit into the image of the otherwise all-round successful electric car. And the fact that only two instead of four buttons for controlling the windows of the vehicle were installed on the driver’s side speaks volumes – especially when you consider that we are talking about a 40,000 euro car (without funding).

After all, this point of criticism, which has now often been expressed, does not fall on deaf ears at VW. According to Handelsblatt, the ID 3 is to be provided with a higher-quality interior in the future. However, details are not yet known. 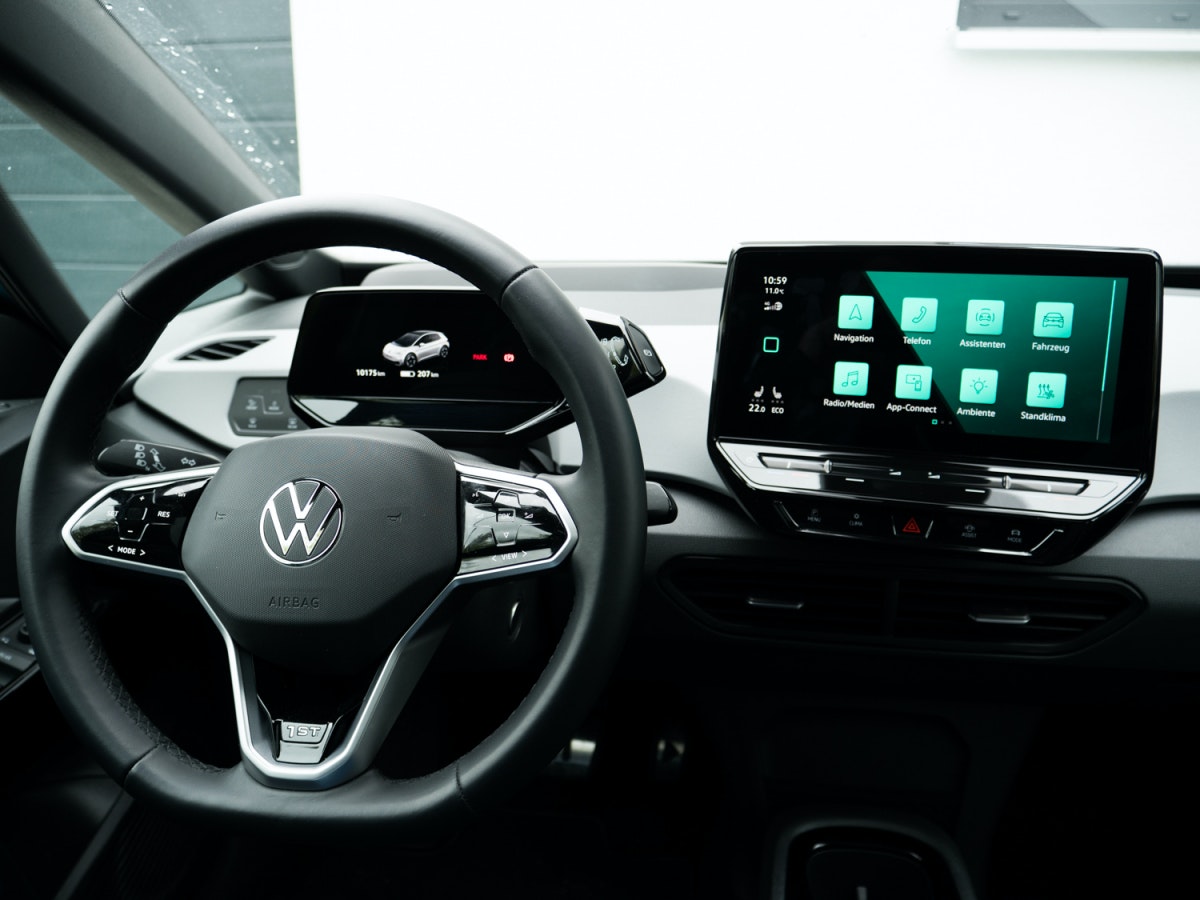 The interior of the VW ID 3 is minimalist and intuitive. Only the quality of the materials used tarnishes the otherwise extremely positive impression. (Photo: Frank Feil)

If you look at the interior theme, the VW ID 3 can convince across the board. In our long-distance motorway test (17 degrees outside temperature, maximum 120 kilometers per hour), we came to a consumption of solid 16.8 kilowatt hours per 100 kilometers. Together with the 58 kilowatt hour battery in our test car, this results in a range of 320 kilometers. At warmer temperatures and lower speeds (for example on the country road or in urban areas), 350 kilometers and more should be possible without any problems.

The ID 3 is a good choice, especially for those who want to buy an electric car for the first time. Because although VW has opted for a touchscreen as the central control element, the most important functions can still be controlled with one (physical) push of a button. With the software’s user interface, too, the developers made sure that all settings can be made with one or two clicks at most – and that you don’t have to maneuver through countless levels. This makes the switch easier, especially for older people who are used to classic operating concepts from their combustion engines. 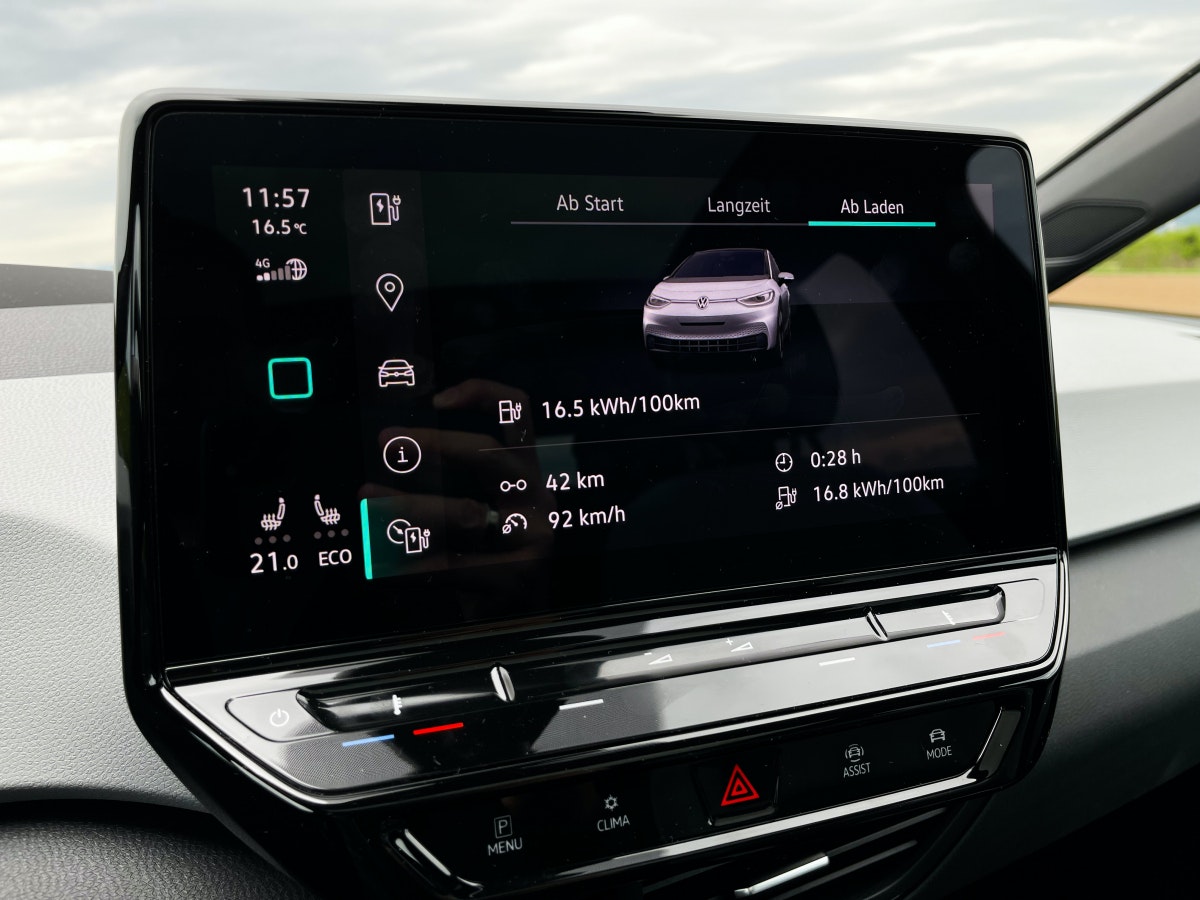 Depending on the route and the outside temperature, the VW ID 3 consumes between 15 and 20 kilowatt hours per 100 kilometers. (Photo: Frank Feil)

Another plus point is the choice when it comes to recuperation. From the outset, the ID 3 behaves almost like a combustion engine in gear D, so it only brakes minimally when you take your foot off the accelerator. In gear B you can clearly feel the braking effect of the recuperation. True one-pedal driving, such as with the i3, is not possible, but with a little practice you can still master most everyday situations without pressing the brake pedal. The decisive factor here is that the driver can decide for himself what he feels more comfortable with. While long-time electric car fans often swear by one-pedal driving, there are many “newbies” who prefer the combination of “sailing” and active braking.

In any case, the VW ID 3 does many things itself with the help of a large number of (optional) assistants. Among other things, it maintains the speed and distance to the vehicle in front, prevents unintentional leaving the lane and warns the driver if there is a risk of collision when changing lanes. You can also book technical gadgets such as Keyless Go, an alarm system or ambient lighting with logo projection. From a technical point of view, the ID 3 leaves nothing to be desired.

A gimmick that is definitely worthwhile from our point of view is the head-up display. In contrast to classic head-up displays, this has been expanded to include an augmented reality component. For example, interactive arrows are displayed during navigation, which offer real added value – especially since the driver’s display behind the steering wheel is only a modest 5.3 inches. To be fair, however, one has to say that VW has managed to show all the important information clearly on what feels like a tiny 5.3-inch display. 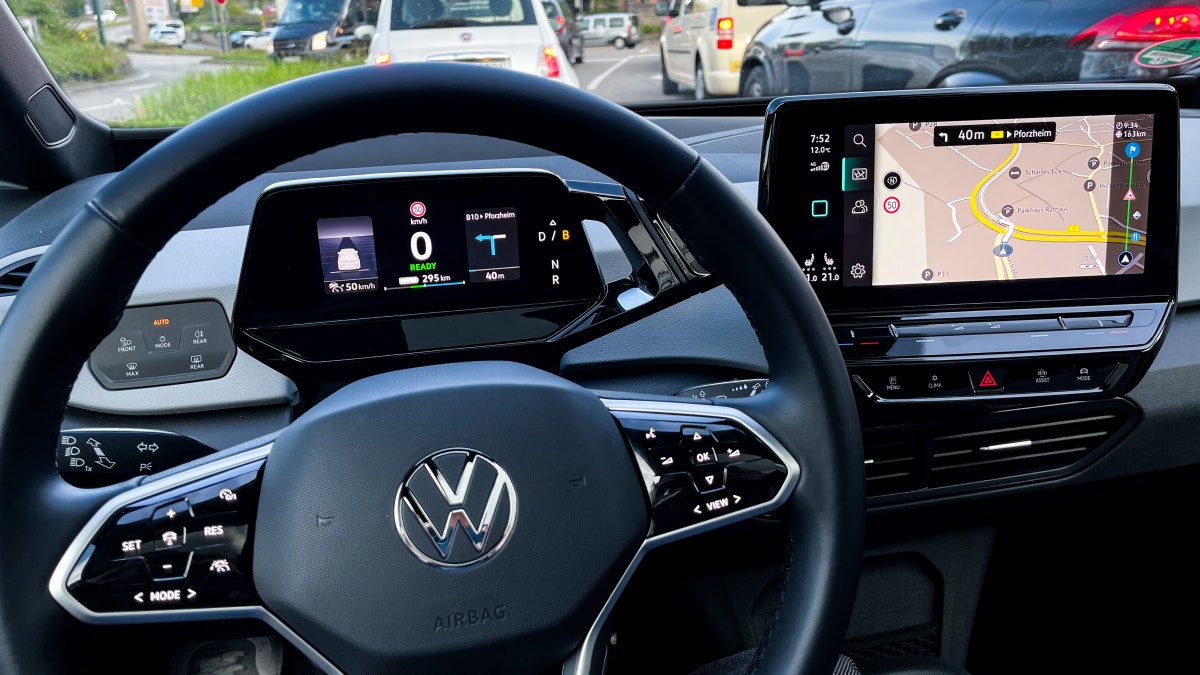 Although the driver display in the VW ID 3 measures just 5.3 inches, it clearly shows all the relevant information. (Photo: Frank Feil)

The VW ID 3 is one of the few electric cars on the market that can cover almost any scenario due to its dimensions and the available battery sizes. Whether as a second car for the city or a comfortable electric car for longer journeys – the ID 3 can be configured accordingly.

This has been particularly true since May 2021. Previously, you had to come to terms with the equipment lines prescribed by VW in a confusing configurator. For example, if you wanted a pure version of the head-up display with a small battery, you were forced to go for the most expensive line. Of course, it contained many other features that were not interested in, but still had to be paid for. The ID 3 can now be freely configured. You only have to select the battery size (Pure, Pro, Pro S) and then you can put together the equipment as you want. 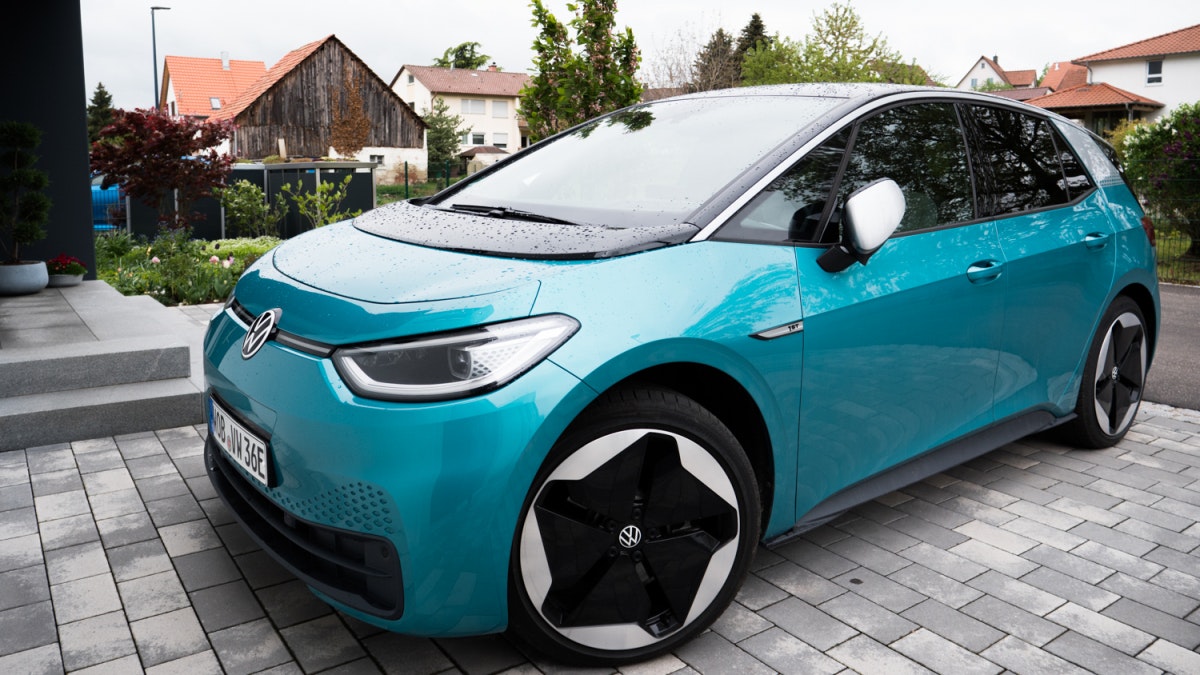 With the ID 3, Volkswagen is bringing the Golf of the age of electromobility to the streets. (Photo: Frank Feil)

To be fair, it should be mentioned at this point that the standard equipment of the cheapest ID-3 model is quite acceptable: parking aid, lane departure warning, traffic sign recognition, navigation system, air conditioning, keyless start and much more are on board as standard. And all for just under 22,000 euros.

And this is exactly what makes the VW ID 3 so interesting: It makes electromobility accessible to the masses – and manages to appeal to both those who simply want an affordable, fully electric second car, as well as those who want an electric car packed to the brim with technology want the long haul. Those who like things a bit sportier should also take a look at the Cupra Born.