This Android tablet comes at just the right time 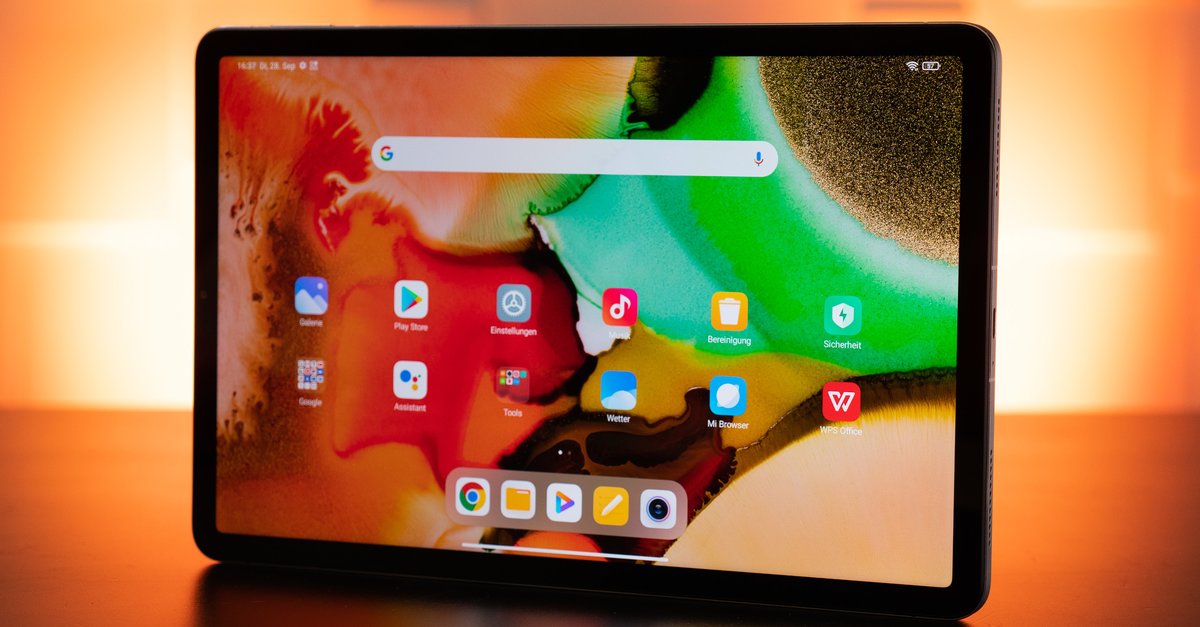 Xiaomi is conquering the smartphone market bit by bit. But that’s not enough for the Chinese manufacturer. The Xiaomi Pad 5 is returning to the tablet market. In the last few days I have been able to take a close look at it in the test. I already liked the first impression very much. I will tell you in my test report whether this impression was retained in the further course.

Xiaomi Pad 5 in the test: conclusion

Xiaomi is back on the tablet market and with the Xiaomi Pad 5 a really convincing product at a price of 399 euros in the program. The design, the processing quality, the display, the performance and the software really convinced me. The cameras are absolutely sufficient for a tablet.

I just found it a shame that the Xiaomi Pad 5 lacks a fingerprint sensor. That would have made it much easier to unlock the tablet. Otherwise, I would like the pen to be a little cheaper and that the keyboard cover would also be offered in Germany. As a general rule there are basically no accessories for the tablet.

But I understand that Xiaomi is cautiously entering the market and would like to see how the Pad 5 will be received in Germany first. For 399 euros the tablet is perfectly fine and I really enjoyed using it. Anyone who got hold of it for 299 euros at the start of sales should certainly be even more satisfied. If I had to get a tablet now, it would most likely be the Xiaomi Pad 5.

Xiaomi tablets used to be made of plastic. I can still remember exactly how “cheap” the devices felt. It feels like worlds lie between the old models and the Xiaomi Pad 5. The Chinese company took a break from the tablet market for a few years and is now taking a break IPad-grade Android tablet built that comes at just the right time. The competition is weak and Xiaomi wants to benefit from it.

The back of the Xiaomi Pad 5 is still made of plastic, but it doesn’t feel cheap at all. At first I even thought that it was matt glass. The framework, however, is made of metal and makes an extremely high-quality impression. The transition between the back, the frame and the display is also well done by Xiaomi. The tablet lies securely in the hand and the frame around the screen is just wide enough that you can hold the tablet firmly without touching the display.

I noticed them particularly positively Speakers, of which Xiaomi installed a total of four. No matter how you hold the tablet, the sound is always good because you never cover all the speakers. I know that from other tablets, where you cover the only speaker while playing and then don’t hear anything. Dolby Atmos also makes the music sound pretty good. I would like a little more bass, but the sound is absolutely fine.

A 120 Hz display is a pleasure

A real highlight of the Xiaomi Pad 5 is the display. It has a resolution of 11 inches with a WQHD + resolution of 2,560 x 1,600 pixels and works at 120 Hz. If you consider how cheap the Android tablet is, then you get it here a real treat. In the last few days I have not only used the tablet in my apartment, but also often in the garden, where I played music or streamed something.

The brightness of the LCD panel could be a little stronger, but you can also see everything. An additional “sunlight mode” is integrated, but it doesn’t make any visible difference to me. If you have set the full brightness, you can no longer get it out. I know that very differently from Samsung devices, where the outdoor mode increases its brightness again.

The tablet can optionally be used with a Xiaomi smart pen. This makes handwritten entries easier to implement. I think the price of 99.99 euros is much too high. For an accessory that you only use every now and then, it wouldn’t be worth it to me, to be honest. But if you draw with it a lot or write mainly with the pen, you can think about buying it. It is attached magnetically to the tablet and charged via it. In terms of technology, Xiaomi is right up there at the forefront.

When it comes to smartphones, I’m not a big fan of manufacturers adjusting the software too much, so I prefer Google’s Pixel devices. When it comes to tablets, manufacturers have no choice but to act. Google lets the companies down because they basically don’t optimize Android for tablets. Xiaomi has thought a lot so that the MIUI 12.5 offers added value on a large display.

Of course, the dock on the start screen, which is reminiscent of Apple’s macOS, catches the eye. I find this extremely practical on the tablet. Also the possibility to be able to display and use several apps at the same time, makes perfect sense on such a large display. However, apps can also be completely detached and hover over other content. This means that Xiaomi enables real multitasking.

Xiaomi has basically given the Pad 5 software many small details that give the tablet added value compared to a smartphone. At the same time, you can choose whether you want to use modern control elements such as gestures or use classic on-screen buttons. All that and much more can be adjusted. For example, I configured the display to be cooler and aligned it to my Pixel 5. Xiaomi offers many options for customizing the interface. You just have to get used to it.

I also noticed that the Xiaomi tablet is relatively clean. There is hardly any bloatware pre-installed. Of course there are Google and Xiaomi apps, but the rest is limited. I would have installed Netflix anyway and WPS Office is actually a useful program. Otherwise there are only service apps. I am absolutely positively surprised that the tablet was not full of trash.

Performance is not always convincing

The Xiaomi Pad 5 is equipped with a Snapdragon 860 processor with 6 GB of RAM and 128 GB of internal storage. The latter cannot be expanded. Basically, the tablet runs absolutely smoothly. That goes for apps and games. At least as long as you use an app.

As soon as the Xiaomi tablet If you have to multitask, you can already feel that your capabilities are reaching their limits. For example, if you watch a YouTube video in the small window and scroll through a website at the same time, you won’t notice anything about the 120 Hz. It’s quite possible that there will be another performance update here. The Snapdragon 860 is “only” a mid-range processor and you can tell it clearly in such situations.

We already have that in the Hands-on video noticed:

A 13 MP camera is installed on the back of the Xiaomi Pad 5. It’s a single camera, even if the design suggests a dual camera. The photos are okay. You can do it qualitatively compare with entry-level smartphones. It is enough for a snapshot. I wouldn’t take photos with it on vacation. You don’t do that with a tablet anyway. The front camera is also sufficient for video telephony. Below are some snapshots that I took with the Xiaomi Pad 5:

The Xiaomi Pad 5 is equipped with an 8,720 mAh battery that can be quickly recharged with 22.5 watts. A maximum of 33 watts is possible, but you need a more powerful power supply, which Xiaomi does not include. But even with the included power adapter, the tablet is quickly charged. The battery life was included in normal use 3 to 4 days. I even used a relatively high brightness.

The display-on time for me was around 10 hours of really heavy use with high brightness. I have not reached the 16 hours that Xiaomi specifies. If I turned the brightness down a bit, 12 hours would certainly be there. This is absolutely fine for a tablet with a 120 Hz display. As always, I didn’t use 60 Hz. Once you’ve used a 120 Hz display, you don’t want to go back.

What I’m missing from this tablet

As much as I like the Xiaomi Pad 5, I am missing some features that I would have liked to see in the tablet despite the price of 399 euros: