These features make the new version better than Windows 10 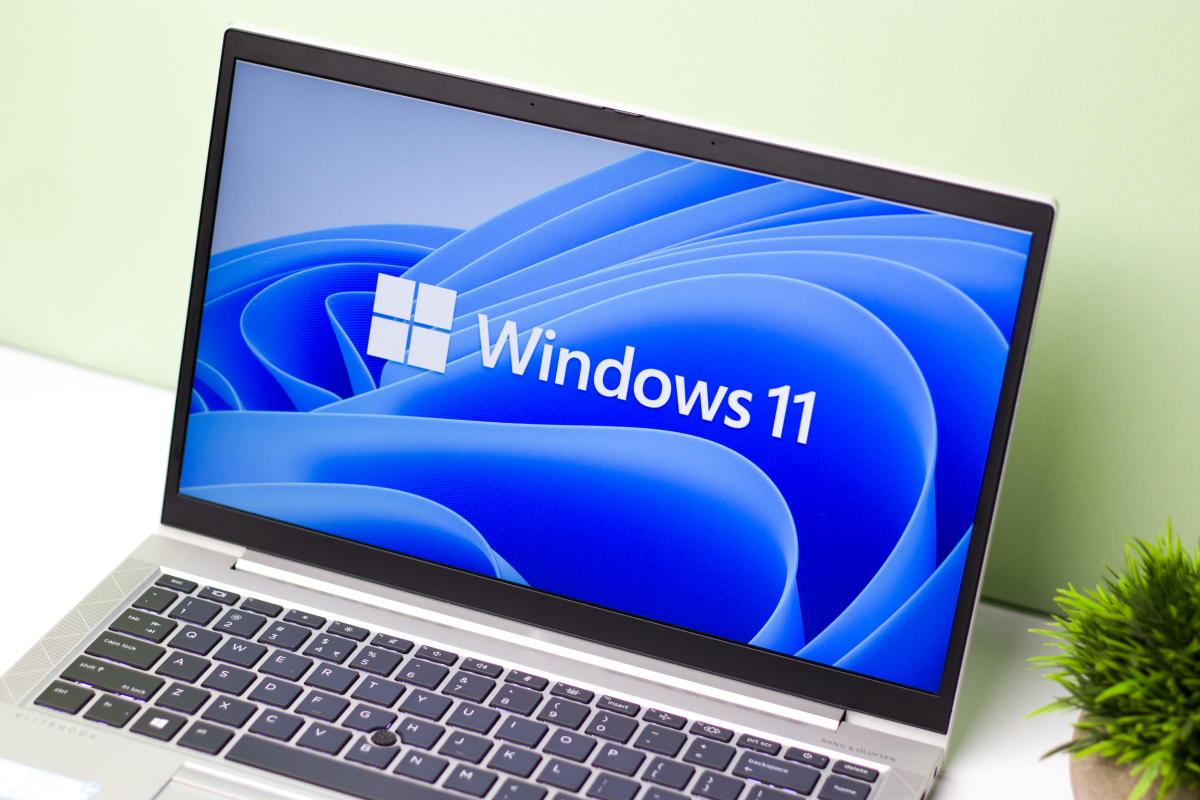 Windows 11 is here and, in addition to a more modern design, brings numerous innovations with it. Here’s a look at some of the key new features that Windows 10 didn’t have.

Microsoft released Windows 11 for the first compatible PCs and notebooks on October 5th. The automatic update will gradually be rolled out to many devices well into the next year. Of course, if you want to have it immediately, you can also install it manually and try it out. If you want to be patient, this article will give you an overview of the highlights of the update, which should make working with your computers easier. Here we go.

One of the visually most striking innovations of Windows 11, in addition to the refreshed, more modern design, is the standard positioning of the start menu: It has been moved from the left side to the center and is also tidier. Microsoft has swapped the vivid tiles for app icons, which are now more reminiscent of smartphone apps.

So you push the start menu to the left again 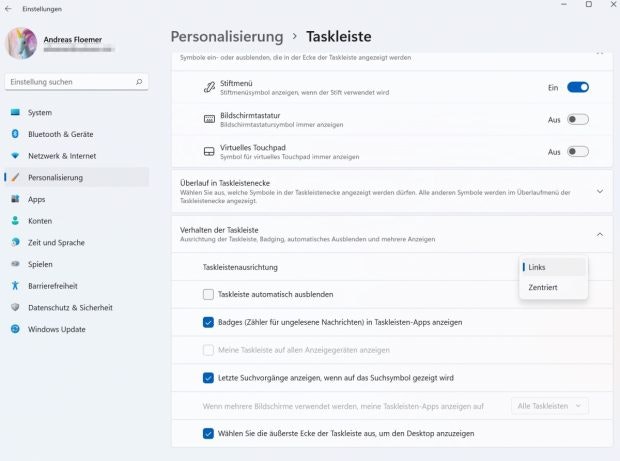 Some of you may not be comfortable with the repositioning – but there is a solution: In the settings under Personalization> Taskbar you will find the taskbar orientation option, in which you can choose between centered and left. 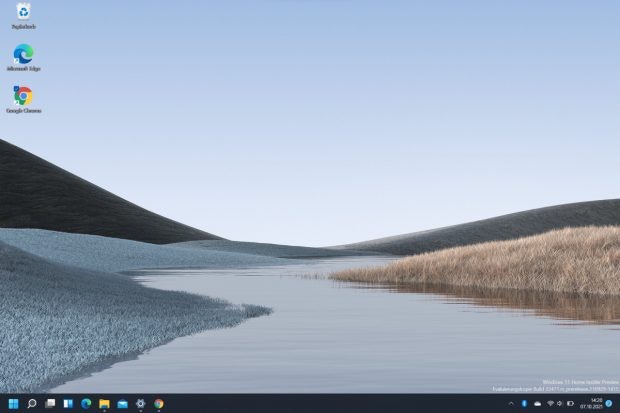 Multitasking gets better on Windows 11 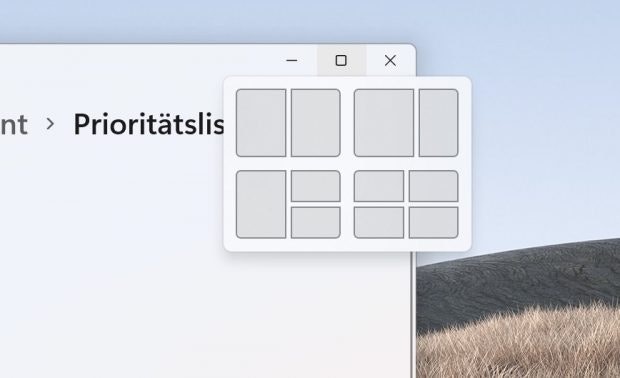 With the snap tool, the app windows can be conveniently arranged according to your own requirements. (Screenshot: Windows 11 / t3n)

For users who always have several windows and apps open at the same time, the new “Snap” function is a blessing. This makes it easier to arrange up to four windows next to or one above the other on the screen. To use the feature, move the mouse pointer over the window maximization icon, and a small menu should appear in which you can choose from four to six arrangements, depending on the screen size. Alternatively, press the key combination Windows + Z. It can be set by clicking on the layout you want.

But that’s not all, because Windows 11 shows your arrangement in the taskbar when you hover the mouse pointer over the respective apps. Here you can switch between the single app view and the snap layout if necessary. 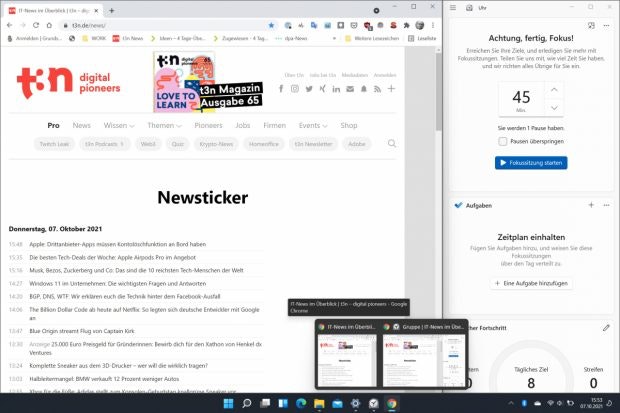 You can find the snap group in the task bar. (Screenshot: Windows 11 / t3n)

With Windows 11 you can also create separate virtual desktops for different purposes and customize them with different background images if you wish. So you can set up desktops for gaming, streaming or other purposes.

Windows is finally remembering how windows were arranged on external displays 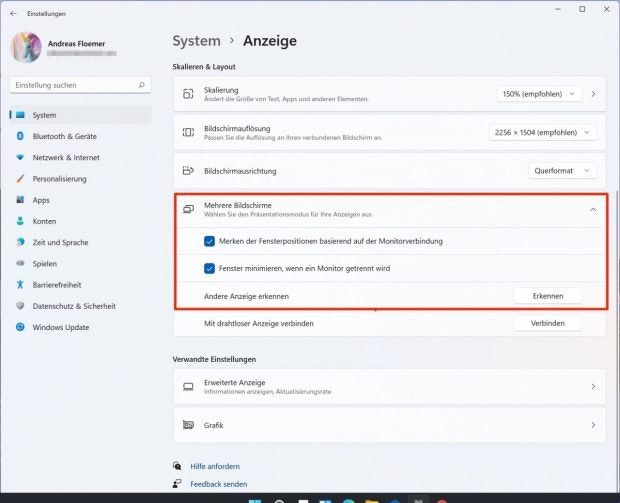 Windows 11 remembers how you arranged apps and windows on the external screen. (Screenshot: Windows 11 / t3n)

Windows 11 brings innovations not only to the virtual desktop, but also to the use of a second screen. The system can now remember how your windows were arranged on an external monitor. So if you cut the connection between notebook and display in the future and then re-establish it, all program windows will end up where you placed them before. That sounds like a small change, but anyone who works with an external monitor will find it extremely comfortable.

Microsoft Teams in the system tray – how do I get rid of that? 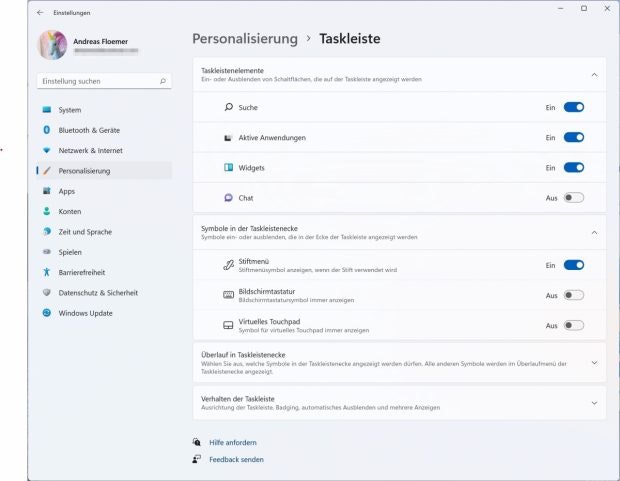 Microsoft’s Teams can be found in the system tray as “Chat” by default, but it can also be removed. (Screenshot: Windows 11 / t3n)

Windows 11 makes Teams the standard messenger app that is created in the system tray at the factory. But if you don’t use the app privately or in a business context, it is superfluous in its new prominent position.

To get rid of them in order to get more space for other applications, open Settings> Personalization and the taskbar. Simply deselect Chat here, and Teams has disappeared from view.

Focus while working: Use the watch app 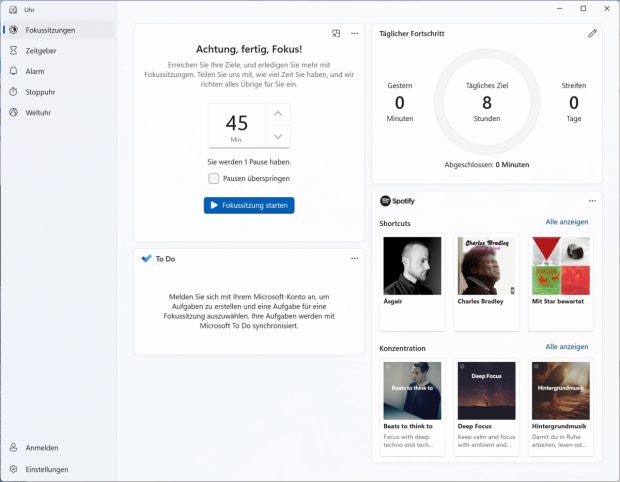 Windows 11 wants to help you with focused work – optionally with music from Spotify. (Screenshot: Windows 11 / t3n)

With Windows 11, Microsoft has drilled out the clock app. It can now help you to concentrate on certain work and study phases. The so-called focus function can be activated via the option Focus sessions adjust according to your own needs. In addition to the focus times, you can also set goals. The function is also linked to the to-do app in Windows 11. You can also be accompanied musically in the focus sessions by linking the tool to Spotify. 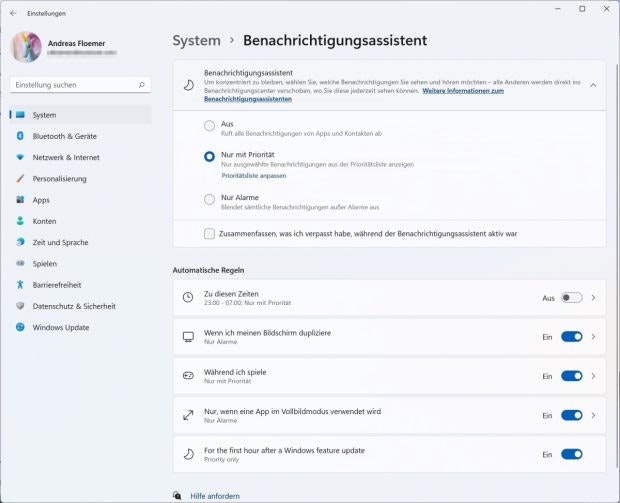 In the notification assistant you can determine whether you want to receive notifications during focus time. (Screenshot: Windows 11 / t3n)

If you are in a focus phase, you can also set which notifications should still reach you. You can find these under system > Notification assistant determine. Under Priority list they can be defined more granularly.

Soon: Use Android apps under Windows 11 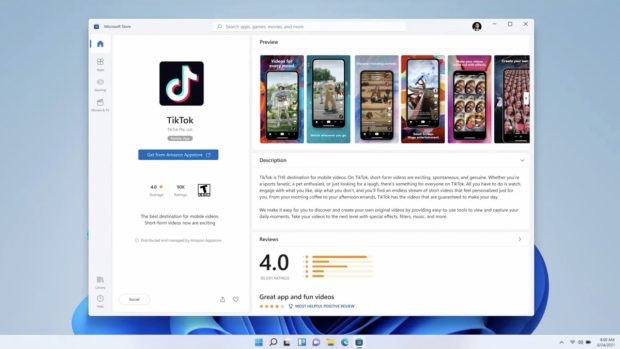 What will also soon be possible: You will be able to run Android apps on your Windows computer in the future. The feature announced in June is being developed together with Intel and Amazon so that you can download and install apps from Amazon’s app store.

In terms of integration, they should appear in the system tray and snap into place on the edges of the screen like Windows apps. Until then, have a look around the redesigned Microsoft store.

You can also find widgets on Windows 11 – to open them, click on the blue and white icon in the taskbar. (Screenshot: Windows 11 / t3n)

Last but not least, the widget bar, which you can call up via a button in the taskbar, is new. The translucent window shows the weather, news, your calendar and other content. You have the option to determine yourself which widgets should be displayed. When you click on the news and the weather, the Edge browser opens with further details. An alternative browser cannot be selected for opening the links. Microsoft has also unnecessarily complicated the standard browser change with Windows 11.

In general, it can be said that the new Windows version leaves a rounder and more visually appealing impression than Windows 10. The first release of the new Windows generation does not seem completely round, however. Remnants of older designs can still be found here and there in the deeper regions of the system. Microsoft is on the right track, but the manufacturer should bring back a simpler browser change, among other things. This kind of nudity only annoys the users. In addition, it contradicts Microsoft’s general philosophy of wanting to be more open.