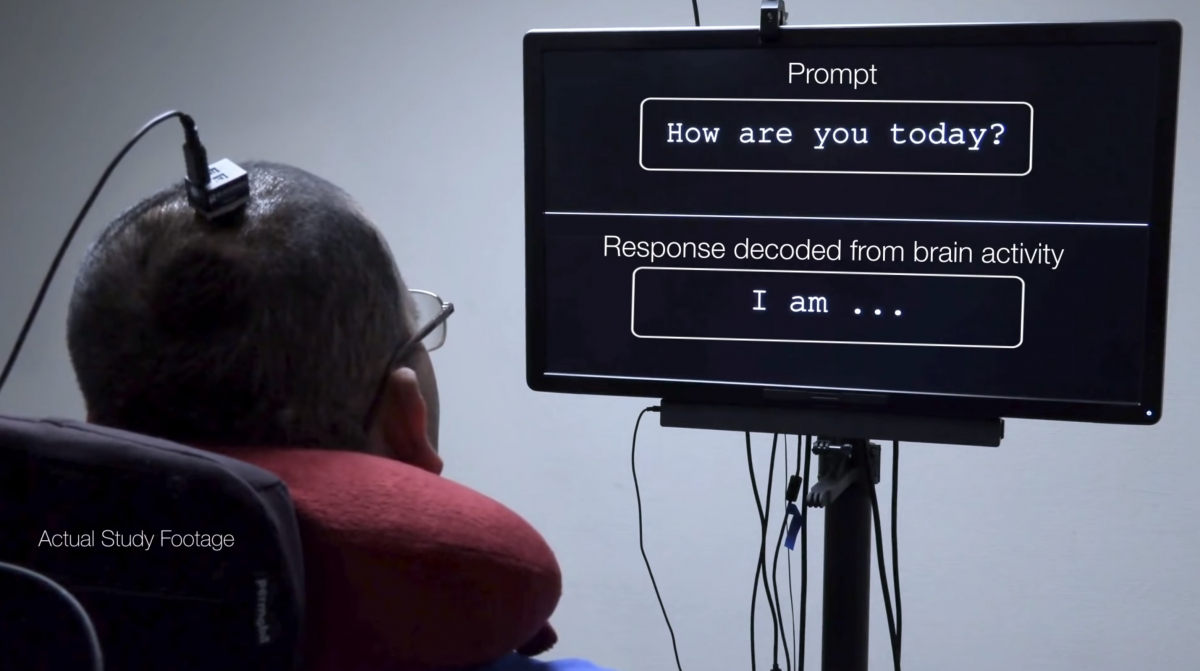 Researchers have developed a device that can convert the brain waves of a severely disabled man into speech. An autocorrection function, such as is used in cell phones, helped.

The researchers at the University of California in San Francisco speak of a “world premiere”, a “technological milestone”. They managed to convert the corresponding impulses into appropriate sentences by reading out brain activities. The first use with a paralyzed man showed amazing results, like you Article in the New England Journal of Medicine represents.

The scientists first attached electrode arrays to patients who could still speak and who were undergoing brain surgery. The sensors in the language center were used to identify vowels and consonants and to analyze patterns that result in certain words. Next, the doctors wanted to prove that their method can help patients who no longer have language skills. Many people lose the ability to speak due to brain damage from accidents, illness, or stroke. Often their other cognitive skills are not restricted.

“Bravo-1” is laboriously typing letters with a pen attached to a cap. The system enabled him to formulate whole sentences with a mind control. (Screenshot UCSF / t3n)

They found a subject who suffered from anarthria (loss of the ability to articulate) and spastic paraplegia from a brainstem stroke. They implanted a high-density multi-electrode array in the man’s sensorimotor cortex – that is, in the brain’s control center for language. They recorded signals for a total of 22 hours while the patient tried to pronounce words from a vocabulary of 50 words. That lasted 48 sessions.

They fed a computer both its data and that of the healthy patients. Deep learning algorithms created computer models for recognizing and classifying words based on brain activity from the cortex. They combined these computer models with a natural language model that calculates probabilities for the next word in a sentence. This combination used the specialists to code entire sentences while the participant tried to say them. This is exceptional in that previous research in this area focused on enabling patients to spell using brainwave measurements. However, the new method works with complete words and short sentences.

The participant, who gave himself the name “Bravo-1”, suffers from severe paralysis. He cannot move his neck, head or limbs normally and communicates with a pen on his baseball cap to select letters on a touchscreen. The researchers worked with him on a sentence of the 50 most important words for him. These included “water”, “family” and “good”. As described, they recorded the brain activity in his attempts to pronounce them and fed it to their brain machine. Then they asked him questions like “How are you?” – and he only answered through the neural system. The computer system decoded an average of 18 words per minute from the brain waves. A subsequent auto-correction, similar to that in the smartphone, helped to achieve an average hit rate of 75 percent. The peak value was 98 percent. The scientists cheer. “To the best of our knowledge, this is the first successful demonstration of the direct decoding of whole words from the brain activity of someone who is paralyzed and unable to speak,” says the co-author Study Edward Chang to the magazine Sceince Altert.