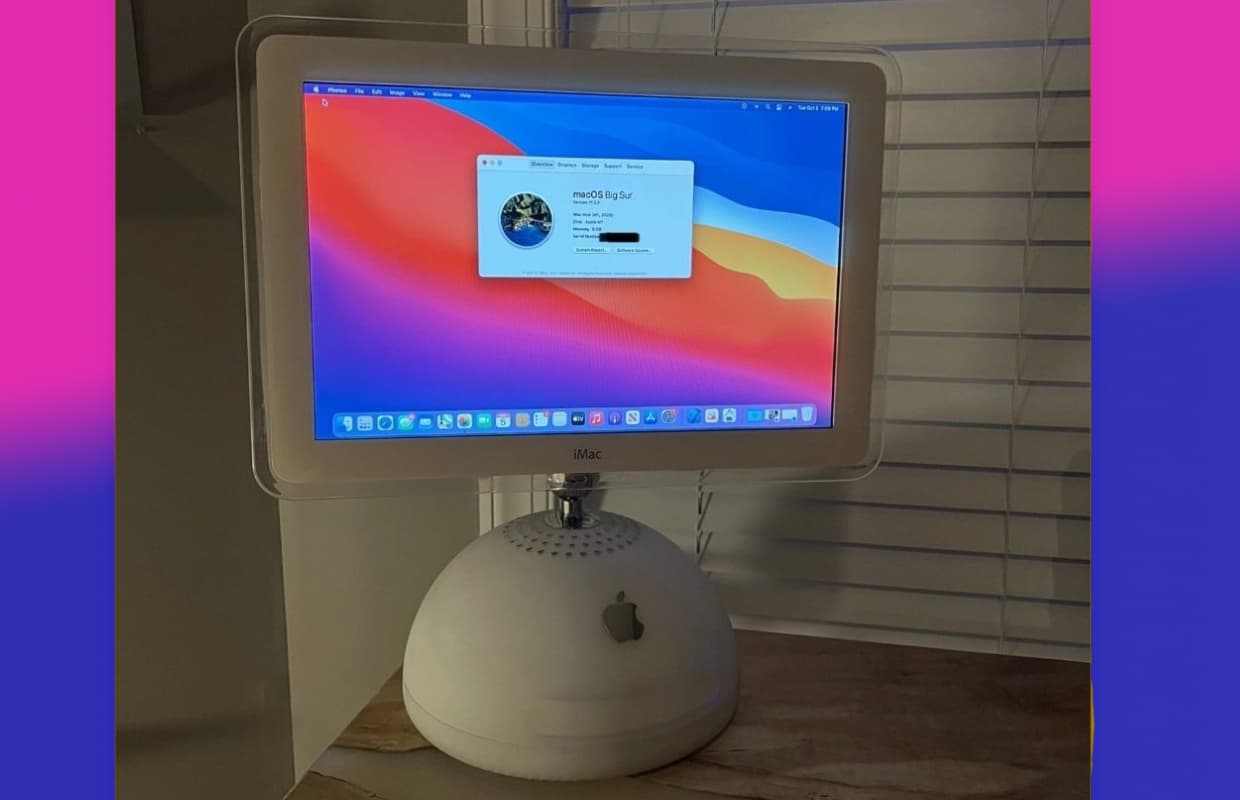 Do you remember him? The iMac G4 that looks a bit like a table lamp. An Apple fan has equipped the old, trusted iMac G4 with a modern M1 chip. And the result? In a word great!

An avid Apple fan has fitted an old iMac G4 with an M1 chip. He did this as a tribute to Steve Jobs. In a tweet let Colby Sheets (@colbysheets) see the end result in a video. When you watch the video you will probably find out (like all his followers) that the old iMac G4 is still a real crowd pleaser.

Inspiration for the iMac G4 M1

Colby says he got a lot of inspiration from a YouTube video that showed how to use an iMac G4 as an extra monitor. He also used a number of other blogs that elaborate on the G4.

Colby himself says about the project: “I don’t know much about hardware and sometimes it was really difficult. But with a lot of perseverance I managed to do it. I am extremely proud of myself!”

On the MacRumors forum, he goes on to say that as a child he always wanted an iMac G4. He tried to fabricate his creation with the hardware of a Mac mini, but the Intel chips weren’t cooperating. This was partly due to the dimensions and the heat development. The M1 gets a lot less hot though and when he found out he wanted to give it another try.

Apple’s M1 chip made its debut in late 2020 with the MacBook Pro and MacBook Air. The chip, called Apple Silicon, can also be found in the iPad Pro 2021 and iMac 2021.

Apple soldered all computer components onto that one M1 chip. For example, the graphics processor and Neural Engine are on the chip. This is also known as ‘System on a Chip’ or SoC. Such a SoC can also be found, for example, in the iPhone 12 series (the A14 processor) or the iPhone 13 (with the A15 chip).

This SoC has greatly improved the speed and graphics performance of Macs with an M1 chip over those with an Intel chip. So the chip makes the Macs a lot more powerful, so that heavy tasks and programs run much more smoothly.

Read more: Everything you need to know about Apple’s M1 chip

What about the iMac G4 again?

It’s been a while since the iMac G4 went on sale. The all-in-one was introduced in 2002 and was sometimes affectionately referred to as the ‘iLamp’ due to its striking appearance. The device had a 700 or 800 MHz PowerPC G4 processor and a GeForce 2 MX video card on board. There was a 40 GB, 60 GB, 80 GB hard drive in the machine and it had a DVD or CD player in the base.

The iMac is without a doubt one of Apple’s best-known and most recognizable products. The most recent update is the 2021 iMac, which was unveiled in April 2021. It’s nice to see that even the old design is still alive with Apple fans.

Want to learn more about Apple’s Mac chip? on iPhoned you will find much more about this M1 chip. For example, we answer frequently asked questions about Apple Silicon and we compared the M1 chip with the Intel chip.

The editors of iPhoned keep you up to date with all the news from Apple. Did you know that we also have our own app? Don’t forget to sign up for our newsletter as well. Then you will always be informed!