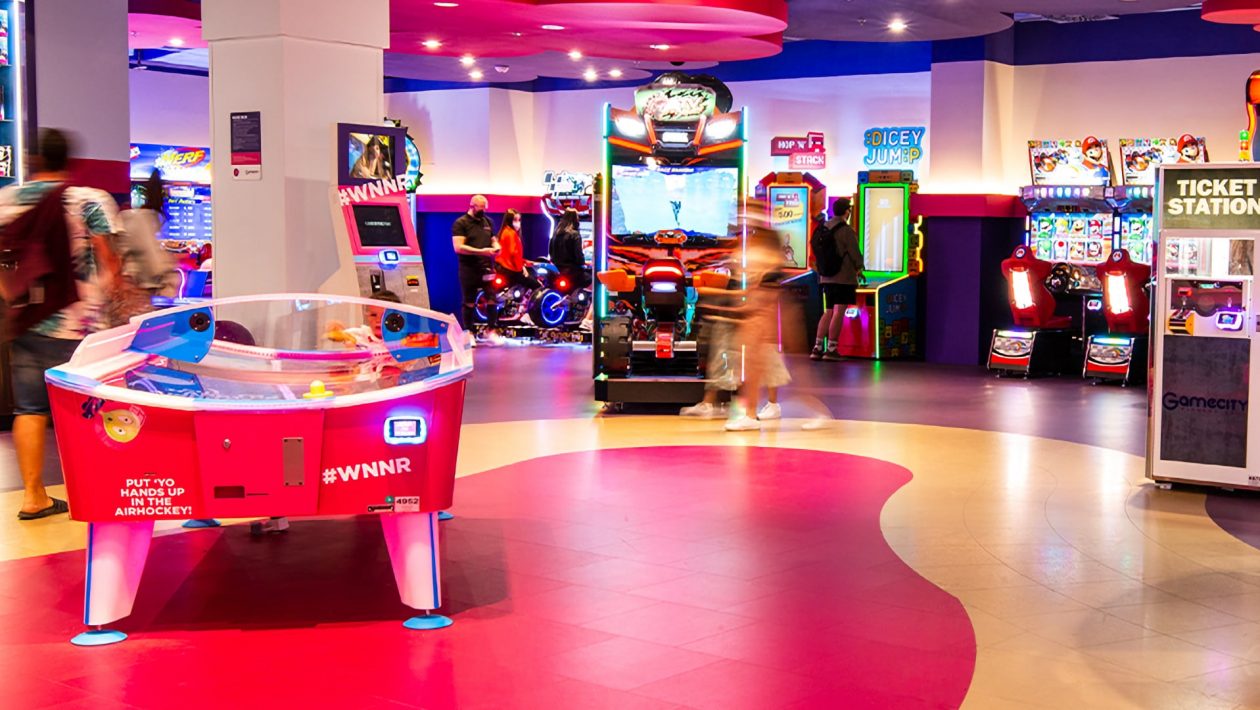 In the Hamleys toy store in Prague in Na Příkopě Street, you will not only find toys. Various attractions are increasingly represented here. You can ride with the children on a carousel, slide, take a look at a butterfly, wander in a mirror maze, play a laser game or try virtual reality in real scenery provided by the DIVR studio, which we also did in Vortex before.

At Gamecity, you do not pay a one-time fee for all-inclusive entry, but a fee for each individual game.

One of the newest attractions is the Gamecity arcade room with approximately twenty-five single and multiplayer slot machines, located on the first floor. The operators themselves are enticing that you can not only play here, but also win something. Like the iPhone or PlayStation 5. But we’ll get to that. It must be emphasized at the outset that this is a completely different type of casino than the Cibien’s Corner Museum in the Šestka shopping center or the Arcade Games in Červený Újezd. At Gamecity, you do not pay a one-time fee for all-inclusive entry, but a fee for each individual game. You can watch for free, but each slot machine is charged.

The offer also consists mainly of modern vending machines and all sorts of interactive machines, not the historical and classical ones. So half of them are aimed primarily at casual players, non-players and children. There’s nothing wrong with that, you should just know. From traditional titles you can try games like Nerf Arcade, Moto GP, Mario Kart Arcade GP DX, Dance Dance Revolution, ATV Slam or Jurassic Park Arcade. And then there are bowling, air hockey, basketball, thrashing off the beaten track and other “fairground” attractions.

As already mentioned, individual games are paid. I have a feeling that I gave an average of 40 to 50 crowns for the tried ones. They should be cheaper there, but they probably didn’t catch my eye. In order to play, you must first buy a special card with a credit for 250, 500 or 1500 crowns. And to the cheapest one you need to add 25 crowns for the card itself.

You just have to play some slot machines. On some you can get special tickets, through which you can get to different prices from stuffed animals to electronics. Depending on how well you are doing, a “snake” of tickets will come out of the machine, which you will then feed to another machine and save your score on the card. You can exchange it for something at the waiter, but I don’t think it’s a priority for this entertainment.

Personally, I would much rather go somewhere where I can really relax at the games and maybe even talk to others.

Rather than the specialized games of the enthusiasts you have probably visited with us, the ones in Hamleys will make you remember the vending machines in clubs or somewhere abroad in noisy restaurants on the beach. The toy store itself is always full of people, and especially in the arcade center there is such a rumble and noise that many parents prefer to turn straight on their heels. This is not for everyone. Due to the noise, you can’t even hear the operator explaining how the system works.

With its pricing policy and the functioning of Gamecity, it is aimed primarily at tourists and foreign guests, and of course the operator has the right to do so. But personally, I would much rather go somewhere where I can really relax at the games and maybe even talk to others. For a few games at Hamleys, you pay the same or more than for an all-day ticket to another similar casino. You may not find the latest games there. Maybe you won’t win anything. But you will enjoy a lot more games, you will save, you will relax and it does not matter whether you stop for an hour or the whole afternoon.

I prefer to touch various games, not to be under pressure from finances and maybe even learn something about titles.

I don’t want to sound harsh, everyone has the right to make the game room they see fit. And this one will undoubtedly find its customers as well. However, I prefer to touch various games, not to be under pressure from finances and maybe even learn something about titles. Gamecity has the advantage of an attractive location and new vending machines that you may not find in other centers. But on the other hand, there are relatively few of them and their offer is fragmented, because the operators try to offer a little from everyone – classic slot machines, pinball, sports, various movement and fairground attractions and so on.

In a way, however, this business model is also instructive. Even though you are surrounded by new slot machines, it actually reminded me most of a time when I was stepping between several games in the Alfa, Jungmann or Národní arcades long ago and carefully weighed which cabinet to try and which was not worth the investment.