A beautiful stylish smartphone with a full QWERTY keyboard and Windows Mobile. In this edition of ‘The forgotten smartphone’ we take you back to the year 2009, in which the Samsung B7620 Giorgio Armani was released.

In 2009, Samsung released a new stylish smartphone, in collaboration with fashion brand Giorgio Armani. The phone was given the less stylish name Samsung B7620, with the addition of the name of the fashion brand. The device had to show that technology and fashion go well together. In 2009 I was allowed to review the device for Mobile Phone Helpdesk, and I made the flash ;-). It was not the first Armani phone from Samsung, by the way. The Samsung P520 Armani already appeared in 2007.

In everything it became clear that this device offered all the luxury you could think of when you heard the name Giorgio Armani. The sales package included an extra battery with extra charger, as well as a luxurious protection. A CD-ROM was also included for software installation. The Samsung B7620 Giorgio Armani also included a stylus with which you could operate the 3.5 inch resistive AMOLED screen. This screen delivered a resolution of 800 x 640 pixels. It was also striking that the smartphone was delivered with a pre-installed virus scanner, good quality earplugs and much more.

Due to the rounding, the B7620 was easy to handle. Underneath the screen was a full QWERTY keyboard, which also typed away wonderfully. No need of? Then you could of course also use the on-screen keyboard. In addition, the screen could be tilted 30 degrees. 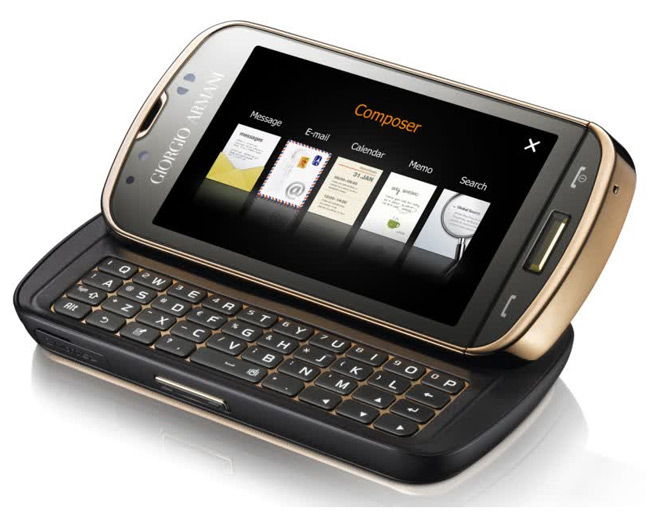 The Samsung B7620 Giorgio Armani folded had the dimensions 118.5 x 58.3 x 16.4 millimeters and a weight of 164 grams. There was a 5 megapixel camera with autofocus that delivered changing images, a front camera and of course Windows Mobile 6.1. Later, the stylish phone got an update to version 6.5. Samsung also gave the device excellent specifications; 8GB of storage space and 256MB of RAM. You could expand the memory with a maximum of 32GB via a memory card. There was its own Samsung chipset, a single-core processor with 800 MHz of computing power.

The list of specifications was further supplemented with WiFi, Bluetooth, GPS, a Micro-USB connection and TV-out port. We also saw a 1500 mAh battery with the Samsung B7620 Giorgio Armani that you could change. The device also featured Patience, as well as a business card scanner and various Armani fashion apps. The Samsung B7620 Giorgio Armani came to the Netherlands for an amount of around 700 euros.