The Audi Q4 e-tron – an electric SUV with smart functions 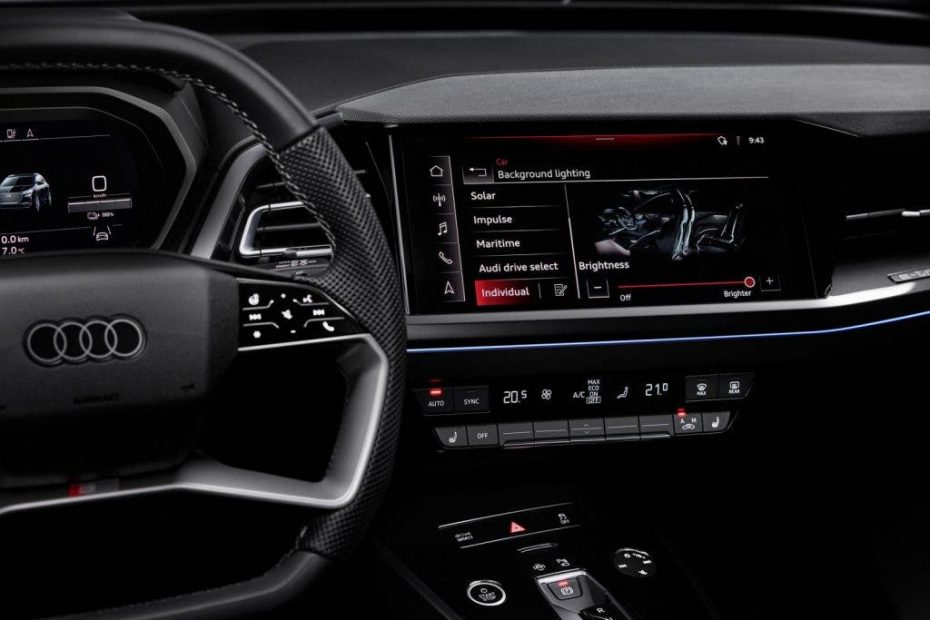 Audi is on the road to success with the e-tron series. The e-tron Q4 2022 is already the fourth e-tron model from the German car manufacturer – this time Audi wants to penetrate the coveted compact SUV segment. The Q4 e-tron is based on the MEB architecture, which is also used in the Volkswagen ID.3, ID.4 and the Skoda Enyaq iV. However, the interior and exterior of these vehicles could hardly be more different. VW relies on a minimalist approach, the interior of the Q4 e-tron, on the other hand, reflects the style of the luxury brand. However, the point where the vehicles differ most is in the infotainment systems.

The Q4 e-tron has a two-layer dashboard that uses the MMI v3 infotainment system with a touchscreen. This is offered as standard with a 10.1-inch display with a resolution of 1,540 × 720 pixels, voice control, MMI radio plus and DAB reception. The system can be used to control a number of convenience functions and supports handwriting input. At the end of the year there will also be an 11.6-inch version with a resolution of 1,764 × 824 pixels – that would be the largest display in Audi’s portfolio to date.

The instrument cluster is completely digital and can be operated using the multifunction steering wheel. Customers can optionally purchase the virtual cockpit, which also offers a navigation map and infotainment controls. The virtual cockpit plus also offers the “Classic”, “Sport” and “e-tron” layouts. 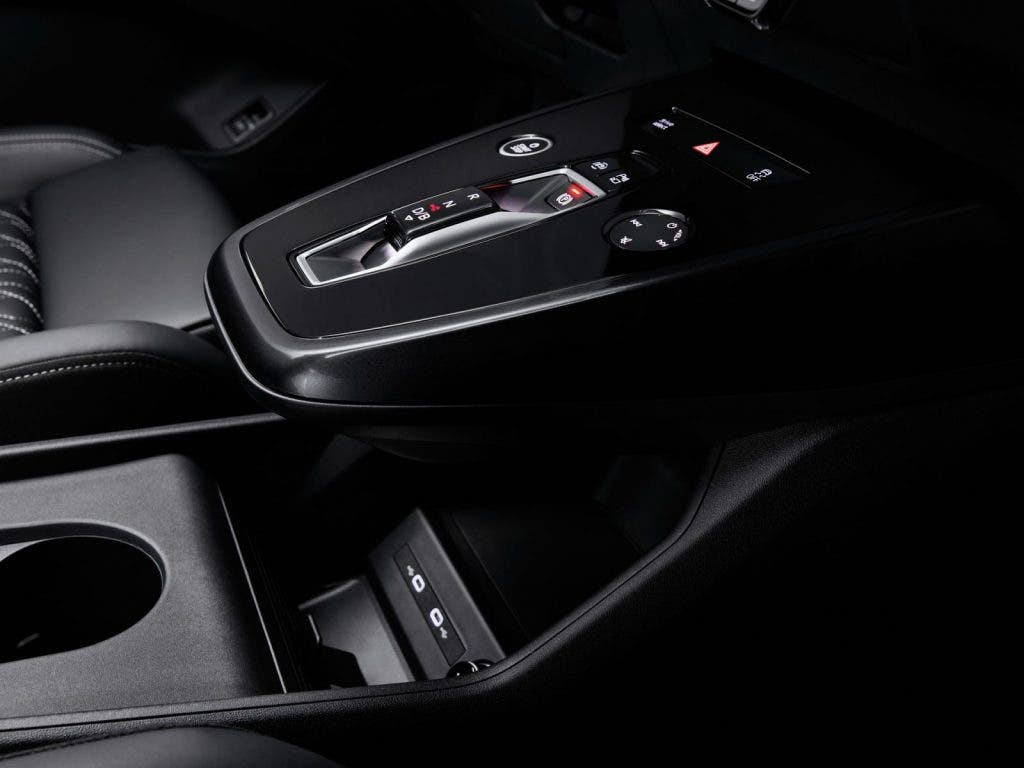 Those who like to use real buttons can be pleased: the climate control with physical buttons is located below the infotainment display. The buttons for gear shifting, driving mode and media control are housed in a floating center console, which also offers storage space. 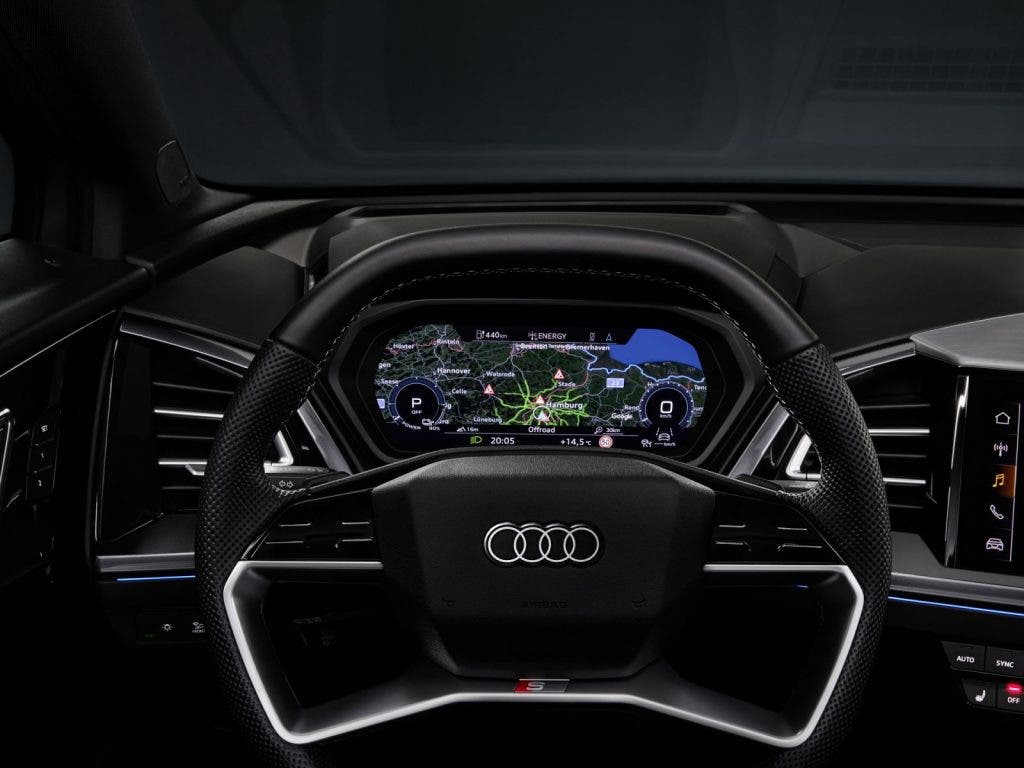 The Q4 e-tron has a new steering wheel design that further sets it apart from the rest of the series. It has touch-sensitive controls that support swiping gestures and have haptic feedback. Head Up Display with Augmented Reality 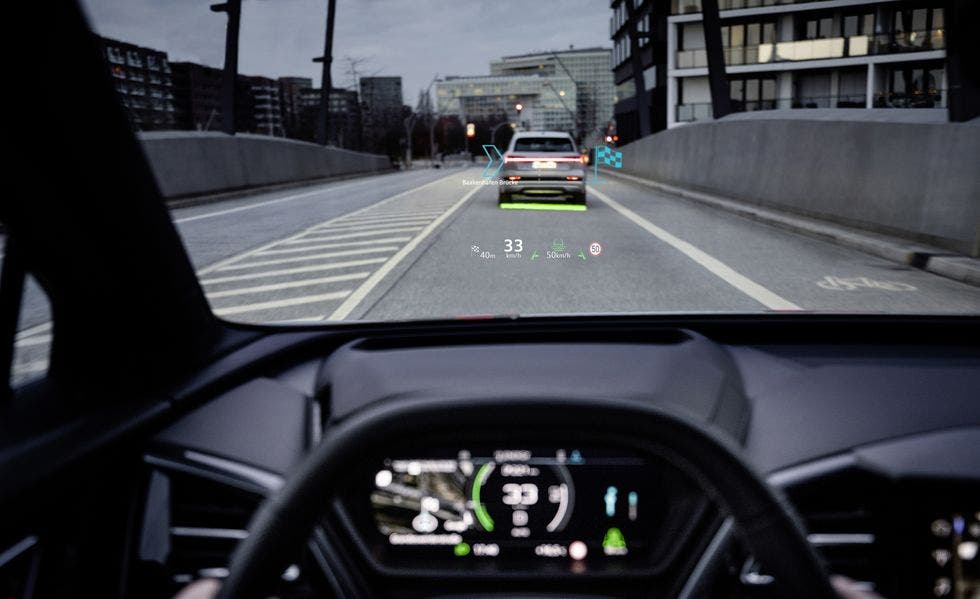 The highlight of the entire equipment is the head-up display with AR support. The feature shows all the important information about the windshield, but unlike normal HUDs, the navigation symbols and certain assistance functions appear to hover at a distance of around 10 meters in front of the vehicle.

The Q4 e-tron displays navigation elements on the windshield – in addition to information about the next intersection, a dynamic, floating arrow is also displayed, which is displayed before certain events. For example, it appears before a turn and helps drivers to stay on the right lane. This should be particularly helpful in roundabouts and at complicated intersections with more than four lanes.

Nicole Scott was allowed to take a test drive with the AR head-up display – you can find the video here: