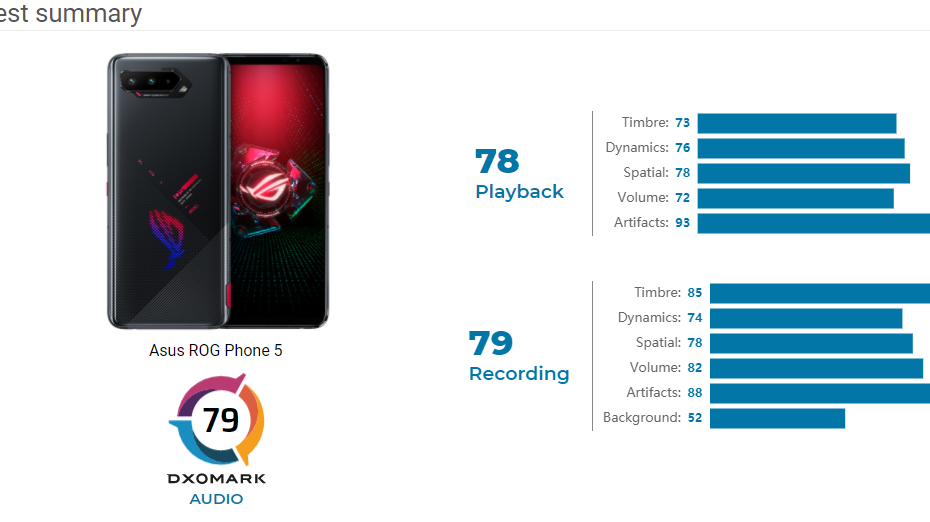 The new Asus gaming phone is already talking about it. The ROG Phone 5 will be presented on March 10, but it has already been tested on certain points at DxOMark.

The Asian manufacturer has been offering gaming-oriented phones for a few years. These are quite expensive products but which are always placed at the top of the specialized benchmarks. The Asus ROG Phone 5 should be unveiled in the coming weeks but the performance of the mobile is already stale. The DxOMark site has just announced the audio score of the telephone and which highlights great promises.

Asus-oriented gaming devices have always had good benchmarks. The Asus ROG Phone 3, for example, was at the top of the Antutu site, measuring the raw power of the phone with a score of 647442 points with a solid configuration. The ROG Phone 5 starts on identical bases with an animated technical sheet thanks to its Snapdragon 888 chip, up to 16 GB of RAM depending on its version and above all a storage capacity of up to 512 GB. However, it is is the sound of the smartphone which is honored by DxOMark.

The audio of a telephone is not, however, a value often taken into account in tests and purchase criteria. The specialized site DxOMark however tests this part in its laboratory, via a battery of tests. The verdict of the latter give a score of 79 points, making it the best device on the market in this area, ahead of the Xiaomi Mi 10 Pro. The spatialization of the sound, as well as a great precision in the matter are the two strong points of the product. Thus the sound during your video game sessions will be sublimated by Dirac HD technology. Even in recording, the ROG Phone 5’s mics perform extremely well.

In short, a few days before its presentation, the phone is promising in its performance component. There remains the thorny question of the price, which is still quite high for Asus gaming phones.