Tesla competitor Nio brings the ET7 electric sedan with a range of 1,000 kilometers 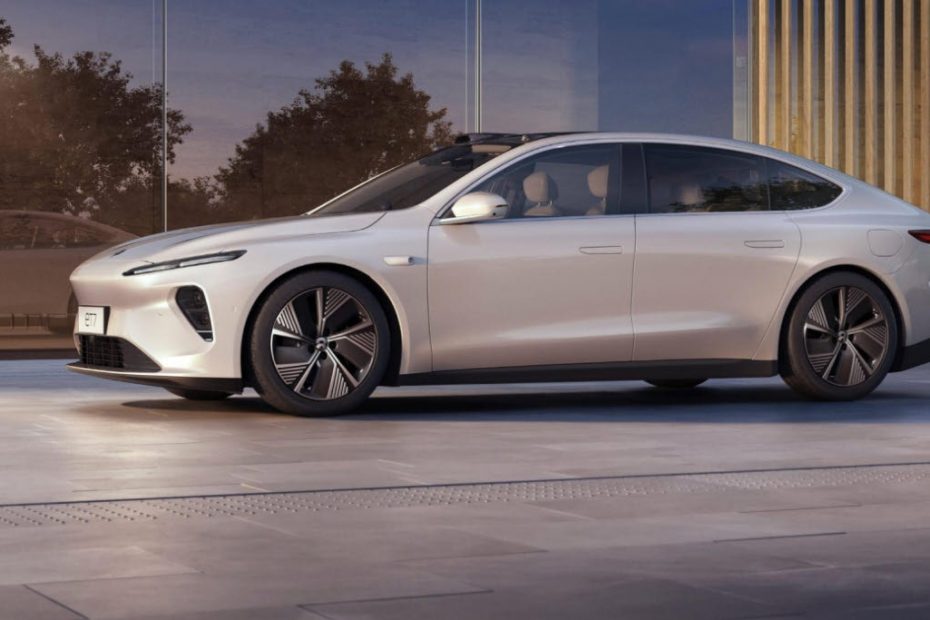 The up-and-coming e-car manufacturer Nio presented a Stromer on its “Nio Day” on Saturday, which should achieve ranges of up to 1,000 kilometers with a solid-state battery and a battery replacement system.

The ET7 electric sedan could be a serious competitor for Tesla’s Model S and the Porsche Taycan. The Chinese carmaker plans to deliver the premium electric vehicle from the beginning of 2022. Its specifications read almost revolutionary.

It is the first limousine from the Chinese manufacturer and it can now be ordered via the Nio app. Company founder William Li announced this when the vehicle was presented on “Nio Day” in Chengdu, central China.

The competition is likely to break a sweat above all because of two concepts that are always presented as the future everywhere, but for which no one has yet seemed close enough to a series concept.

The Nio ET7 should be equipped with a solid battery and the typical Nio battery change system. The change system is intended to save Nio drivers from charging in everyday life.

By the end of this year, the manufacturer plans to have 500 such charging stations installed in the People’s Republic of China, each of which should be able to swap 321 battery packs per day. The exchange process should be done in less than three minutes.

The Nio ET7 comes with three different battery configurations, all of which are based on solid-state batteries, which should be able to provide an energy density of up to 360 watt hours per kilogram. For comparison: The batteries used in Tesla’s Model 3 have a capacity of 260 watt hours per kilogram. In purely mathematical terms, this would result in a range increase of around 40 percent for the NIO batteries.

Nio remains conservative when it comes to his coverage. For example, the car manufacturer specifies a range of up to 500 kilometers for the smallest battery pack available with an energy content of 70 kilowatt hours. This roughly corresponds to Tesla’s range specifications.

It gets more interesting when we look at the larger battery packs that Nio wants to install. This is where the more compact design of the batteries shows its advantages. It simply fits more power into the floor pan.

These are the performance values ​​of the ET7

When it comes to drive, Nio relies on two electric motors and thus on all-wheel drive. A permanent magnet motor on the front axle has an output of 245 hp. A second at the rear even offers 407 hp. According to reports, the ET7 should not lock at a speed of 200 kilometers per hour.

The design of the premium sedan should also suit the target group’s taste. The ET7 is one of the larger sedans. It is almost 5.10 long and almost two meters wide, making it slightly larger than the Tesla Model S.

Control in cooperation with Nvidia

When it comes to control technology, Nio cooperates with the GPU giant Nvidia. The car manufacturer uses four Orin SoCs (System-on-a-Chip) in the ET7 and in this way achieves 1,016 simultaneous tensor operations (TOPS) per second. The Orin chips are the heart of the new on-board computer called “Adam”.

For control by the driver, Nio relies on a 12.8-inch display in the middle of the dashboard, supplemented by the well-known NOMI operating system with artificial intelligence. If you want, you can add the appearance of particular sustainability to the high-performance car and have seats made of rattan fibers installed.

The manufacturer also offers fully air-conditioned leather massage chairs. This is complemented by a sound system that can fire 1,000 watts from 23 loudspeakers at the occupants.

Price from 48,000 euros, can be ordered immediately

Nio wants to deliver the first copies of the sedan from the beginning of 2022. For the basic model with the smallest removable battery, the car manufacturer is asking for a purchase price of around 56,000 euros. If you prefer to rent the battery pack instead of buying it, you still have to put around 48,000 euros on the table and then plan around 190 euros a month for battery rent. Similar to the competition, the premium model costs around 10,000 euros more. This staggering is obviously enjoying some popularity among car manufacturers.

Nio rents out the driver assistance systems. If you want to have all available systems activated, you have to plan a further rental cost of around 90 euros per month. Like its competitors, Nio is working on gradually moving these systems towards self-driving cars.

Nio is considered Chinese Tesla and shouldn’t be unhappy about this classification. On closer inspection, there are hardly any reasons for this rating to be found.

For example, Nio is looking forward to record deliveries for 2020. After that, the manufacturer was able to sell around 44,000 copies of its range of three models. This is the seven-seater electric SUV ES8 and its smaller version ES6, which is also available as a Sportback under the model name EC6.

In comparison, Tesla delivered more than ten times as many vehicles in the past year. Even when comparing stocks, there are hardly any similarities. While Tesla is trading at over $ 800, Nio is scratching the $ 60 mark. Both automakers, however, have seen their shares grow at a similarly rapid rate over the course of 2020.