Super Mario 3D World + Bowser’s Fury is an absolute concentrate of the more or less traditional Mario in 3D. Nintendo squeezes the maximum out of both design approaches and at the same time does everything to make you feel comfortable, smart, or at least receive nice rewards throughout the game.

It is not enough to say that it is not only beautiful, but above all an incredibly playful platformer. Old-new Mario is much more. Like almost every part of the series, this one packed with various details is that it would be enough for the next two games and it is definitely not just an ordinary platformer. 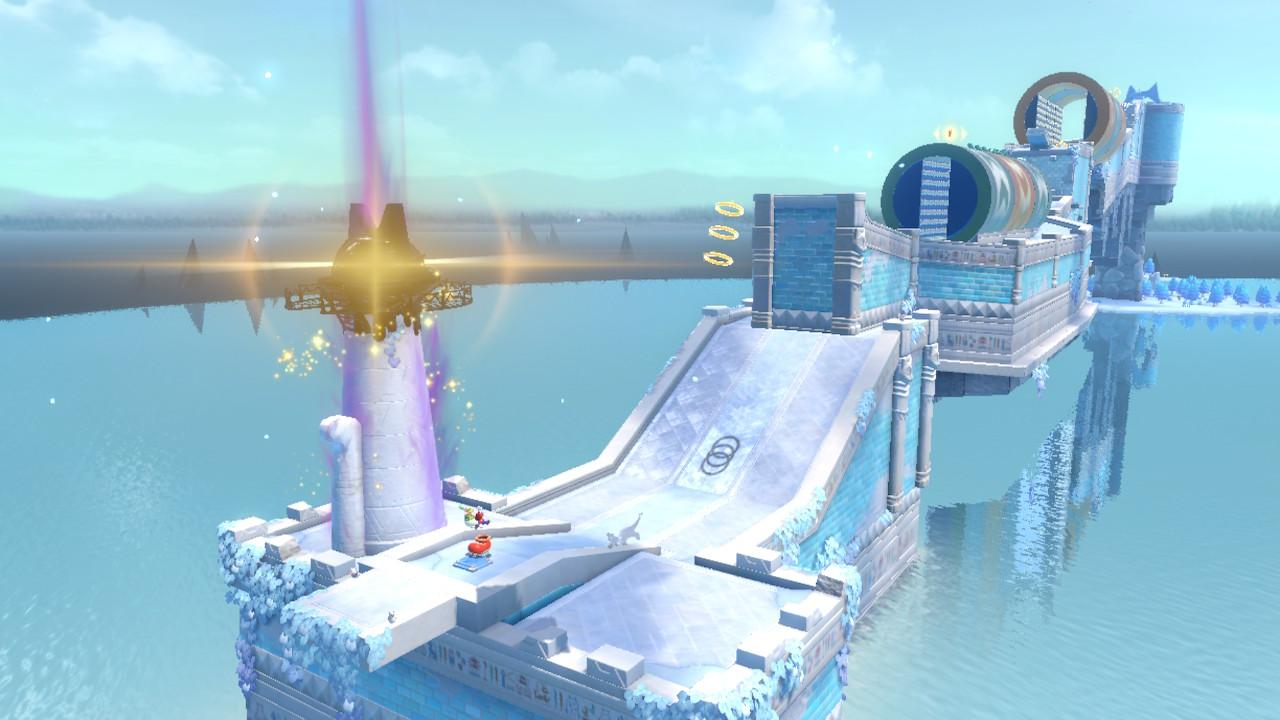 Like the last great Super Mario Odyssey so far, SM3DWBF (delicious shortcut) works on several levels. For the most basic, it’s really just a simple bouncy castle. You run through stylish levels full of all kinds of Mario properties, collecting coins, jumping on enemies’ heads, and if you succeed, collecting a star. Just a classic we all know well.

But just take a good look and you will immediately see an extremely sophisticated, complex and well-thought-out 3D platformer with more varied gameplay than Frog Fractions. Logical puzzles, play with the environment and various suits, led by a cat, may have made me wonder in recent weeks what they can think of in Nintendo.

In addition to the precisely processed classic hopping, Super Mario 3D World + Bowser’s Fury manages to change concepts, perspectives, tempo, characters and genres at any moment. Moreover, none of this repeats itself enough to become playful, annoying, or perhaps boring after a while. You don’t always play for the classic Mario, you don’t always move from left to right, you don’t always have control completely under control and it’s not always just a collection of coins or stars. 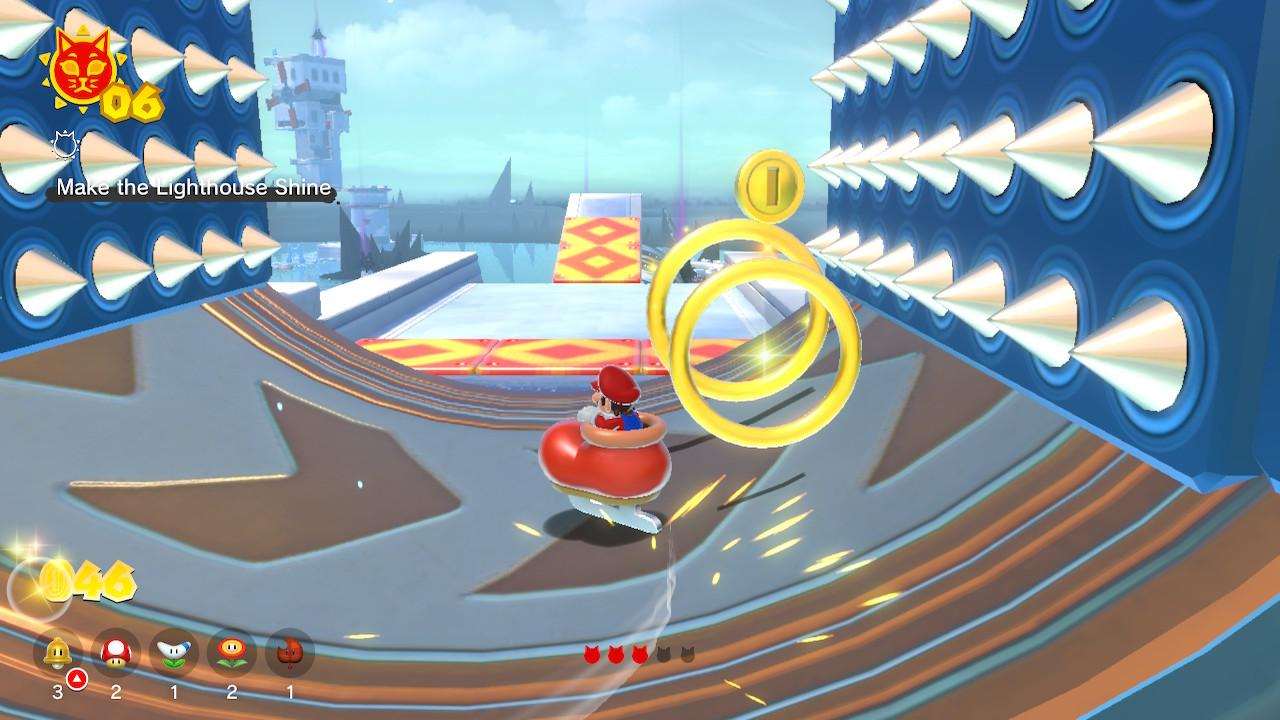 Personally, I never had a Wii U, but the cat suit was one of the big news at the time and at the same time one of the main attractions. Surprisingly, you only have it sometimes, or you don’t have to have it at all. How much you use or don’t use it depends on you and your abilities. Thanks to the cat suit, you can climb walls, attack while running, make lunges from the air and so on. Suddenly you can and sometimes you have to start thinking about levels completely differently than in the skin of a standard bouncing Mario.

For some hidden or advanced passages, a cat suit is necessary, because as in almost every Mario, some later levels are really infernally difficult. And while the game isn’t generally complicated, you can sweat a bit. Hardcore players can try speedrunning, looking for hidden places and collecting everything they can get their hands on, which strikes me as an almost superhuman performance, or I may be too old for the top Mario. Less skilled players can only collect the main stars needed to advance to other worlds, and non-players will just run around, jump and collect coins here and there. Nintendo is thinking of everyone again. 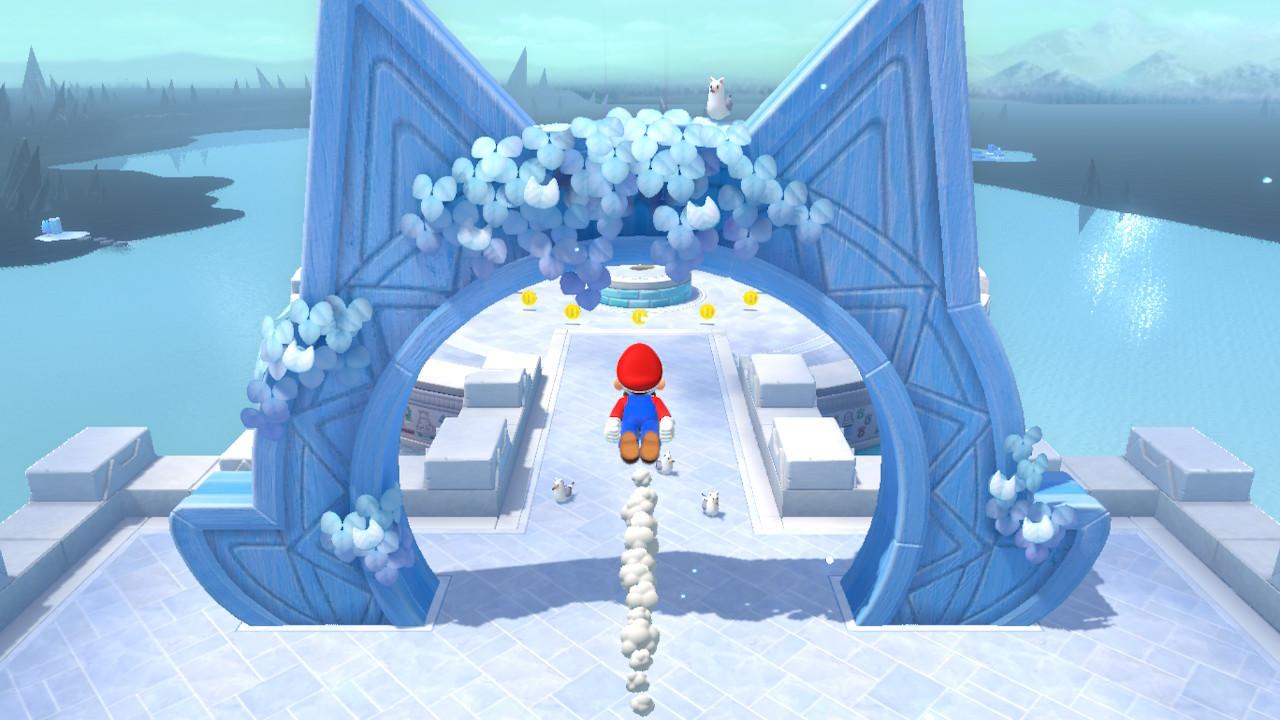 One of the biggest attractions of Super Mario 3D World + Bowser’s Fury is without a doubt multiplayer. This is a typical competitive cooperation, where you go through the levels together, in some places you may help yourself a little and in some places you still do some damage. You can play in up to four people (locally and online) and I’ll tell you, it’s a real mela and a huge portion of fun.

For me, multiplayer is the highlight of the game, especially in the local area, and literally anyone can get into it. Just watch out for non-players – for them, the first steps may not be easy just because it’s all in 3D. Hitting some platforms when a character can walk in all directions and not just from left to right is a little harder for someone like that, but it’s only a matter of time before they learn it. And for absolute novices, there is the White Tanooki suit, with which you are immortal. 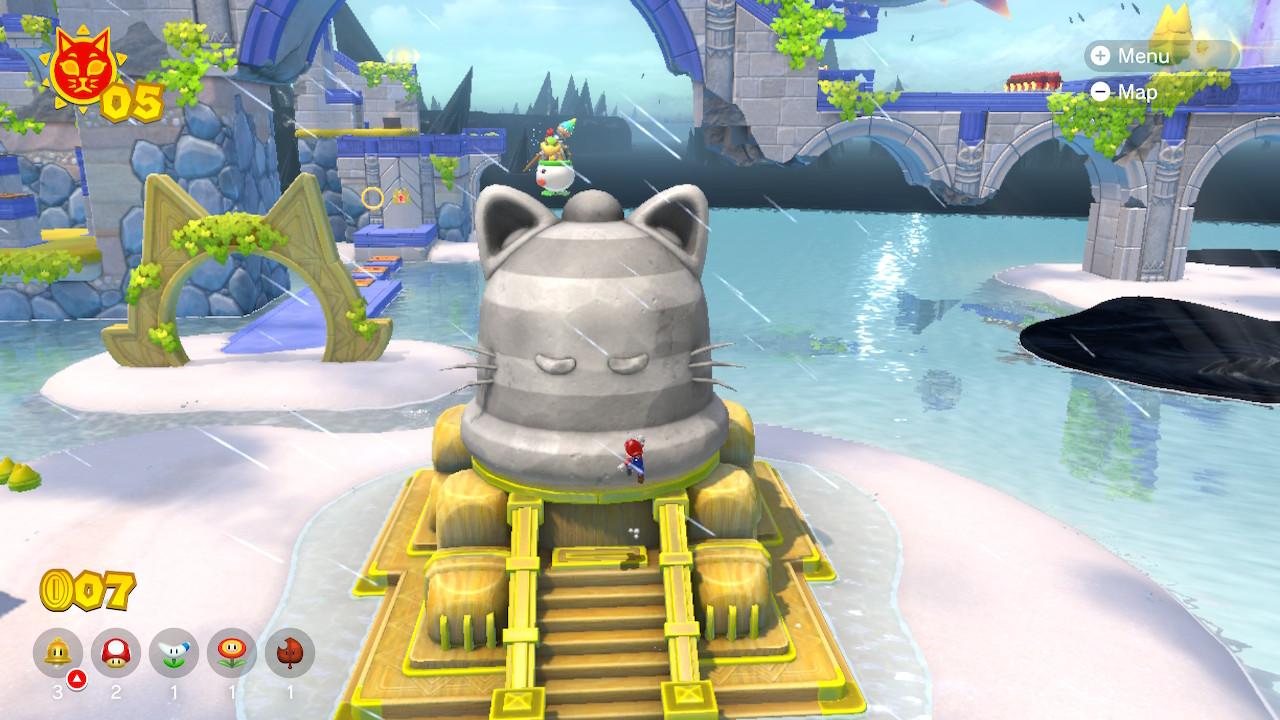 Captain Toad first appeared in Super Mario 3D World as the protagonist of his own levels and with his own gameplay. It’s a specific change of genre: When you suddenly play for Toad, you can’t jump and you’re locked into a tiny, multi-layered level that you can rotate. There are several stars scattered in it and you have to figure out how to get to them within the time limit. Suddenly, we leave the mantineles of the platformer and enter a purebred logic puzzle.

It’s a very nice change of pace in precisely designed levels, so it’s no wonder that this is where Nintendo said it had to make a stand-alone game. The result was a full-fledged Captain Toad Treasure Tracker, and if you haven’t played it, you should fix it quickly.

It is worth mentioning that you can play these levels in cooperation, and although the other may not have much to do in them and it looks a little redundant, it is still a pleasant experience, suitable for a combination of player + non-player. 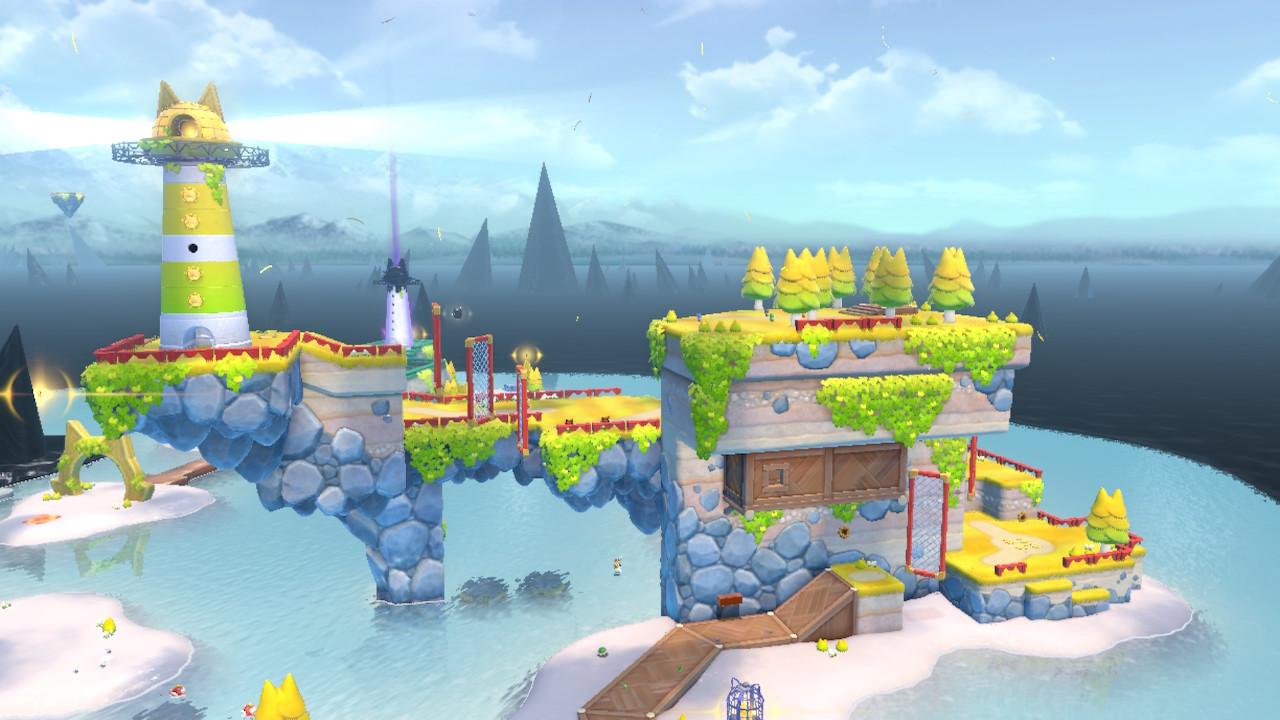 Next, let’s discuss a unique addition that was not in the original game and is the main reason why Super Mario 3D World + Bowser’s Fury should be considered by the owners of the original game from Wii U. Bowser’s Fury is and is not different from the original game: From Super Mario 3D World remixes assets and all sorts of elements, but instead of linear levels with a clearly defined beginning and end, it offers a small open world with lots of activities, a map, freedom of movement and at least the same level of playfulness and thoughtful design.

In Bowser’s Fury, you will do nothing significantly different than what you do in the original SM3DW. It’s all suddenly more open, freer, you can go where you want and instead of a pre-lined procedure you have a smaller world full of lighthouses. You have to light them up and use them to defeat the huge Bowser, who always attacks you once in a while. With the help of a special bell, you will also enlarge, and you can thus stand up fairly to the main enemy, until it sometimes resembles Dynamaxing from the last Pokémon. The duel with Bowser seems epic, and although it is not particularly demanding in itself, it is a stylistic culmination of certain passages.

In Bowser’s Fury, you play for Maria, but you’re not alone: ​​You join forces with Bowser’s descendant, Bowser Jr. He flies around you, helps you, shows hidden things and he’s a nice companion at all. Here, too, you can play in local cooperation, where one plays for Mario and the other for Bowser Jr.

It’s great too, unsurprisingly. One player jumps and does everything Mario can do, while the other flies around him like a Bowser squirrel. You can’t jump for him, but you fly high enough and with your brush you can not only attack, but also help Mario reveal hidden things. 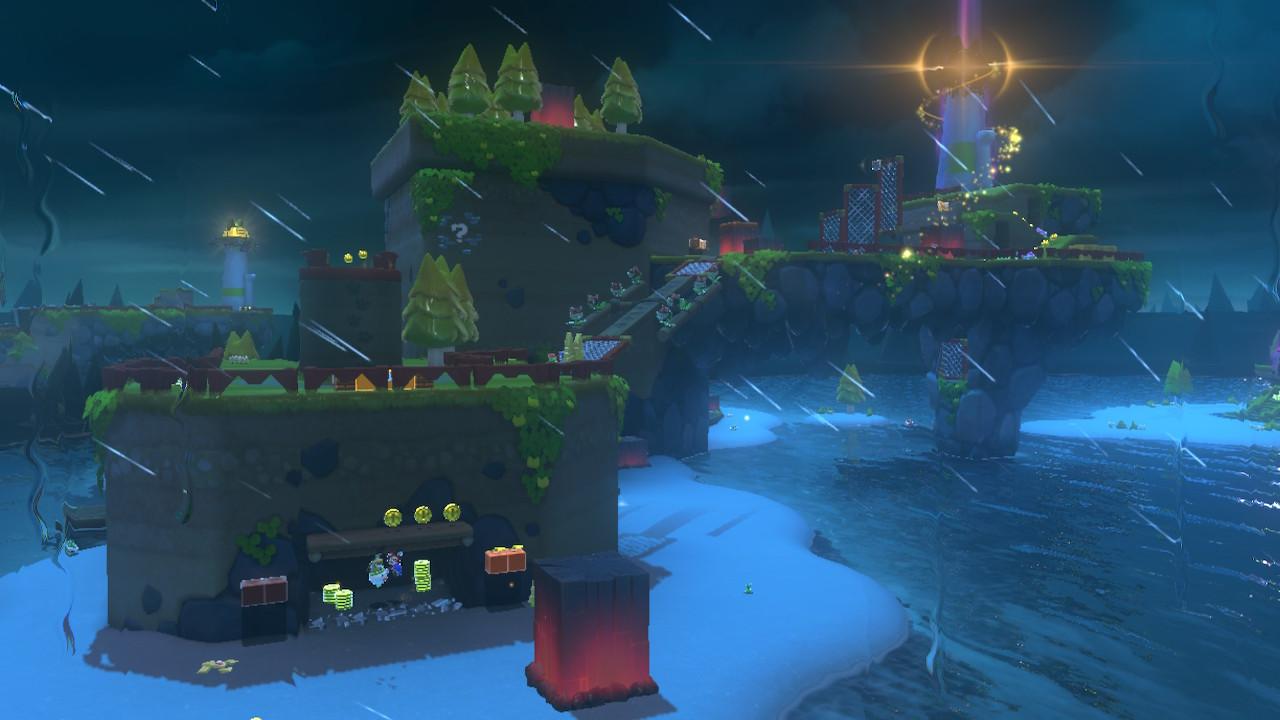 Such explicit help (you really can’t do much harm to each other here) adds a new dynamic to the game that you won’t find in the original game, and it’s fun to agree on where you’re going and how to deal with enemies or a series of platforms. In addition, like Mario, you can transform into various clothes or objects, so you can throw boomerangs, be a cat again, glide like a carapace or fly regularly for a while.

Unfortunately, what is surprisingly not great is the technical processing of Bowser’s Fury. The whole open world looks a bit worse in places than anything in the main campaign. It’s not so sharp, no one has even heard of anti-aliasing here, it’s all rough and it just doesn’t look so nice. And to make matters worse, the framerate sometimes gets angry. Not significantly and only rarely, but you notice it and it’s not nice.

It is a terrible pity that the developers could not catch up with such a sophisticated, fun and great addition in all respects, even from a technical point of view. On the other hand, his problems are inconsistent, because although Bowser’s Fury looks worse than the campaign, in some places he is actually quite similar to her. It’s weird, it’s a shame, but it’s definitely not in the way of fun. 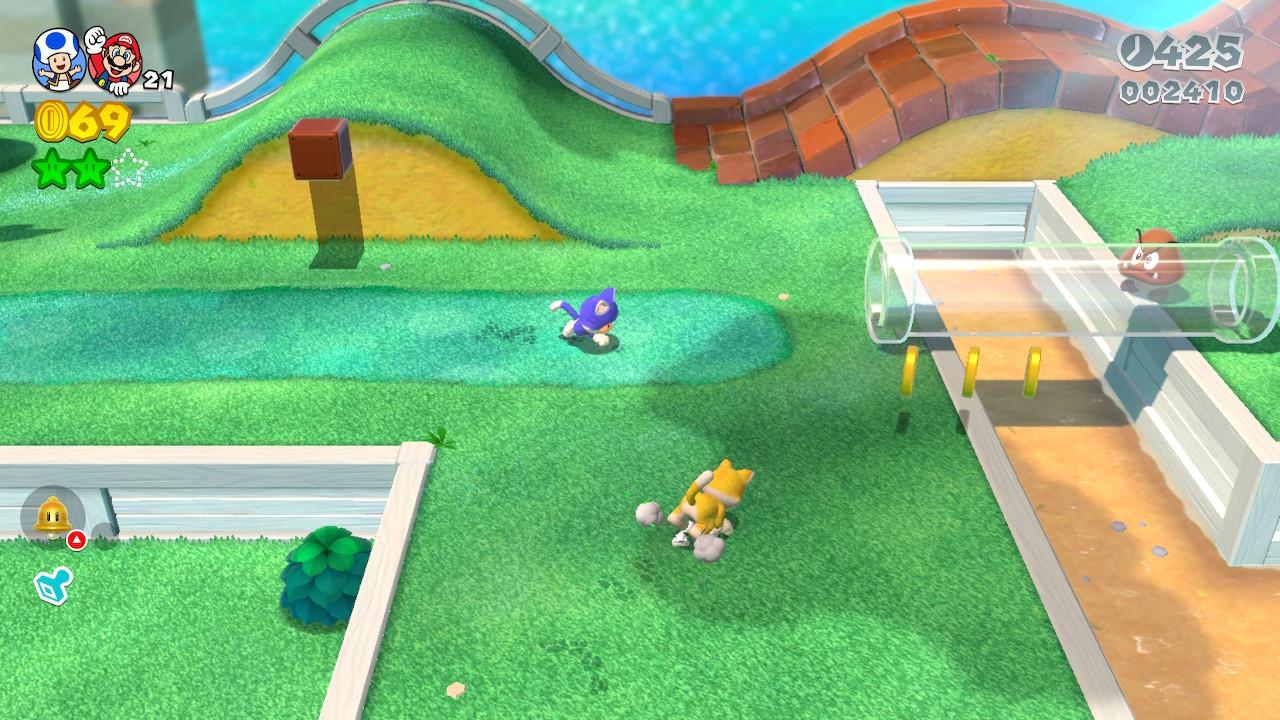 Super Mario 3D World + Bowser’s Fury is one of those games that you will want to return to not only because of the refined gameplay in the style of “easy to learn, hard to master perfectly”, but also because of the feeling it will leave in you. The game is incredibly pleasant, not only with its visuals, but also with its positive soundtrack. You simply want to spend time in its environment.

Technically, it still looks great, strong pastel colors are not aggressive, but pleasing to the eye. And for example, the user interface doesn’t look as outdated as it did from the recent re-release of Pikmin 3. At the same time, the creators with this specific look not only play visually, but also use it for gameplay. The icing on the stylish cake is a clever photo mode, where you can use solid moves, options and sometimes quite wild filters to solidify yourself.

Unfortunately, nowadays it is not obvious that the games are ready-made and technically presentable. I don’t come across any specific title, after all, we can’t be sure even with remasters (Commandos II HD Remaster) or remakes (Warcraft III Reforged). Nintendo itself recently stepped aside in the form of the annual Super Mario 3D All Stars collection. There were great games, but their form, packaging, sales method and technical condition were at least a disgrace for me.

Fortunately, Super Mario 3D World + Bowser’s Fury is (almost) a prime example of what it should look like. Everything runs as it should, it looks great, it moves smoothly and I personally did not come across a single bug or glitch and the game never fell for me. The only freckle on the beauty is the already mentioned technical condition of the Bowser’s Fury add-on, but even in this case it is not a tragedy or something that would negatively affect the gameplay as such. It just looks a little worse in places. 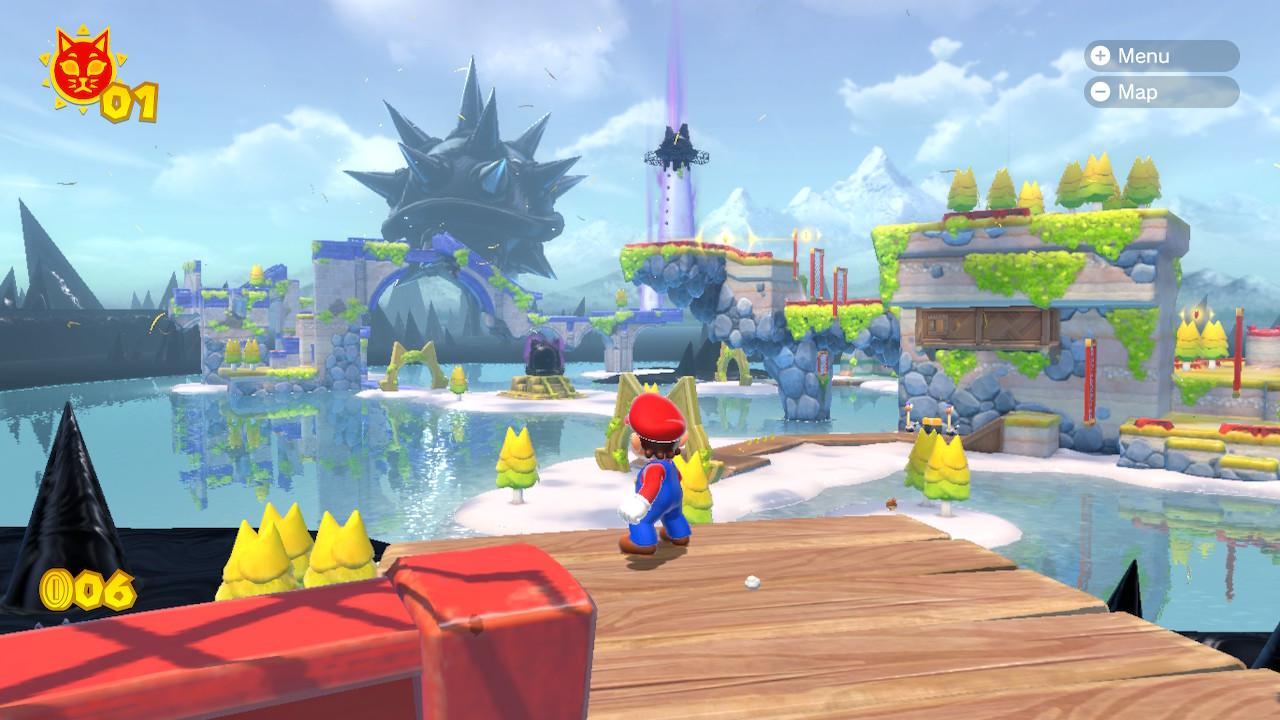 The design in the main games with Mario is mostly unrivaled and Super Mario 3D World + Bowser’s Fury reminds us again. It is quite irrelevant that the original game was released eight years ago on an unsuccessful and scantly expanded platform. It is fun and timeless so much that it will be relevant for the next eight years. You won’t find better 3D hopping in a classic style with such an emphasis on multiplayer elsewhere. Nintendo reminds us here with great ease and of course that in this genre it moves in a completely different galaxy than the others.

Super Mario 3D World + Bowser’s Fury does not act as a milestone in the genre or series. Since then, we have had, for example, Super Mario 64, Super Mario Galaxy, or even Super Mario Odyssey. The boundaries of the genre are no longer shifting here today, but in addition to minor technical shortcomings, Bowser’s Fury is probably the only thing I can complain about the game.