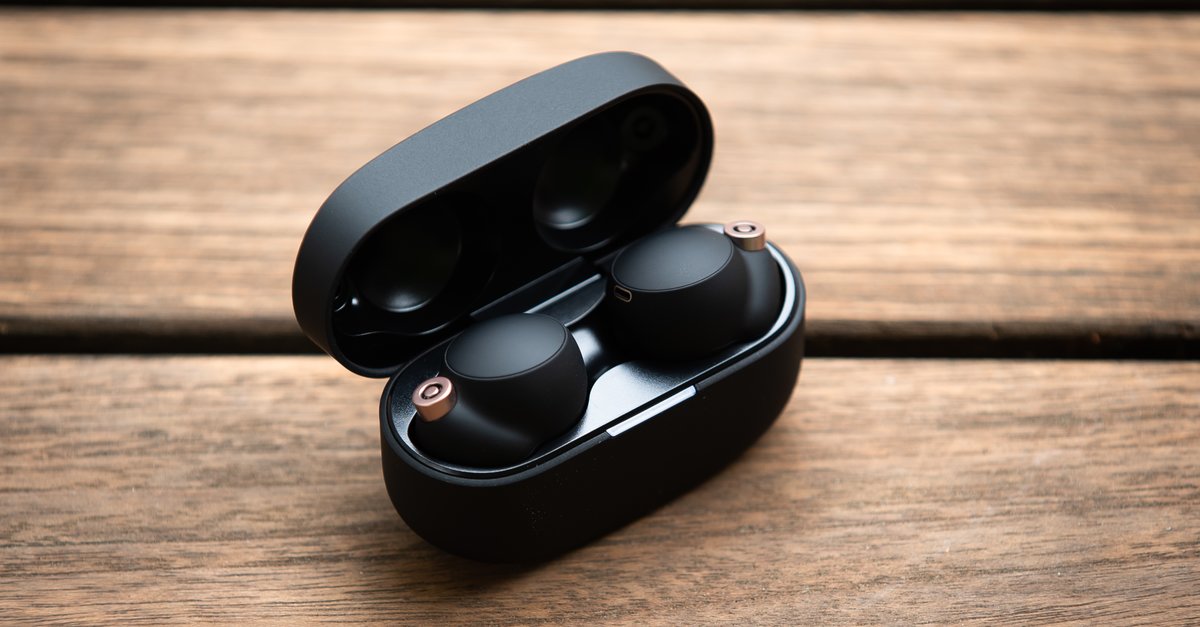 Sony’s best true wireless headphones with noise canceling to date: In the test, GIGA audio expert Stefan clarifies where the WF-1000XM4 climb to the top and where there is still room for improvement.

Just close your eyes and enjoy the music: I’m standing in front of a late night drink at Rosenthaler Platz, sipping Have a soda and listen reverently to “The Lover of Beirut” by Anouar Brahem. People walk past, the car traffic jerks, in the middle of it the tram on the way to Rosa-Luxemburg-Platz – the Sony WF-1000XM4 shield me so well from ambient noise with their excellent noise canceling that none of it stresses me out. But that’s not all: The true wireless headphones also sound fantastic and sit securely in your ears.

But they are not perfect, because the long-term wearing comfort is only mediocre and the touch controls cannot completely inspire me. The two great strengths are clearly the almost audiophile sound quality and the top-notch ANC, Sony’s model beats every currently known competitor product – including the popular Apple AirPods Pro. We warmly recommend the Sony WF-1000XM4 to those to whom these two points are most important.

It seldom happens that you look at one sonic all-rounder hits: A headphone that masters every style of music – from the fine details to the brutal bass drum hammer. The Sony WF-1000XM4 are such a technical marvel. They get the best out of every song, be it the melancholy of Blumfeld, the nonchalance of Migos or the darkness of Kammerflimmer Kollektief. I never have the feeling that there is still something “between” my eardrum and the music. Sony manages to get one direct view of the sound as I last experienced it with the Sennheiser Momentum True Wireless 2.

The sound character is not strictly neutral, but rather more entertaining: The Bass is raised slightly, which gives the music a little more energy, especially on the go and during sporting activity, and lets you move forward. Even if the sound is always subjective – considering the richness of detail and the joy of playing, I give the Sony WF-1000XM4 the Top grade: 10 points for the sound quality.

The ear molds of the Sony WF-1000XM4 are not the usual silicone attachments, but made of a viscoelastic material (Memory foam). Before being inserted, they can be squeezed together slightly so that they slowly expand again in the ear canals. The effect after a few seconds: The ears are perfectly sealed – which in turn ensures a secure fit, rich sound and high passive insulation (high tones, voices, birdsong) against ambient noise. The filling feeling is reminiscent of “Ohropax soft earplugs” – and at first it takes a bit of getting used to.

The housings of the Sony WF-1000XM4 are actually not that bulky, but still stick out to the side when worn. Personally, I like the slim “AirPods look” better, the flat Samsung Galaxy Buds Live are also more elegant in terms of design. Overall, the Sonys are portable, at least for 1-2 hours at a time.

Quick Charging, Google Fast Pair (for Android), Speak-to-Chat (music pauses when speaking), 360 Reality Audio (e.g. with Tidal), splash protection (IPX4) – the list of features of the Sony WF-1000XM4 is quite impressive. The Manufacturer video shows the most important functions:

The codecs SBC, AAC and LDAC are supported – but not Qualcomms aptX (HD). The Operation is by touch – and as always (with headphones) that has its pitfalls. Sometimes the surfaces react too sensitively (both sides can be operated), but occasionally only when you tap it a second time. I would have preferred a pressure sensitive control or hardware buttons.

The App (Sony Headphones Connect for Android and iOS) is a bit sluggish, but useful and versatile. The equalizer in particular impressively shows that the Sony WF-1000XM4 can be adjusted in terms of sound to almost any taste – for me a sign of the excellent “output sound quality” in the factory setting.

The case is charged via USB-C or wireless, a power supply is not included (- I used an Anker PowerPort III USB-C charger). The preliminary one Battery life of up to 8 hours per charge (ANC activated) I can confirm. Together with the battery in the case, you get several days of normal use.

But anyone who uses several devices alternately (cell phone, tablet, PC, etc.) will miss Multipoint Bluetooth. After all, the Sony WF-1000XM4 support lightning-fast connection via Google Fast Pair (Simply open the case near the Android phone), and the Bluetooth pairing mode can be easily triggered by touching both touch surfaces at the same time for a few seconds.

The absolute highlight is that Active Noise Canceling (ANC), which confidently sits at the top of the true wireless models currently known to me. Even the passive shielding is quite high due to the well-sealing ear pieces. The electronic noise insulation then effectively blocks out monotonous hum (e.g. traffic noise). Neither the JBL Live Pro + TWS (see test on GIGA) nor the Apple AirPods Pro (see test on GIGA) can keep up with the performance offered here. It is also gratifying that Sony is dealing with the problem Wind noise got under control: The “predecessor” Sony WF-1000XM3 I still remembered negatively – with the Sony WF-1000XM4, the wind is only passed on to a minimal extent outdoors and does not disturb the enjoyment of music.

With the strong ANC performance, which depends largely on the electronics (microphones) and the software, it is unfortunate that Phone calls or slack calls with the Sony WF-1000XM4 are just satisfactory: a bit tinny in the sound and also quite strong background noise. A future software update could perhaps improve the performance here.