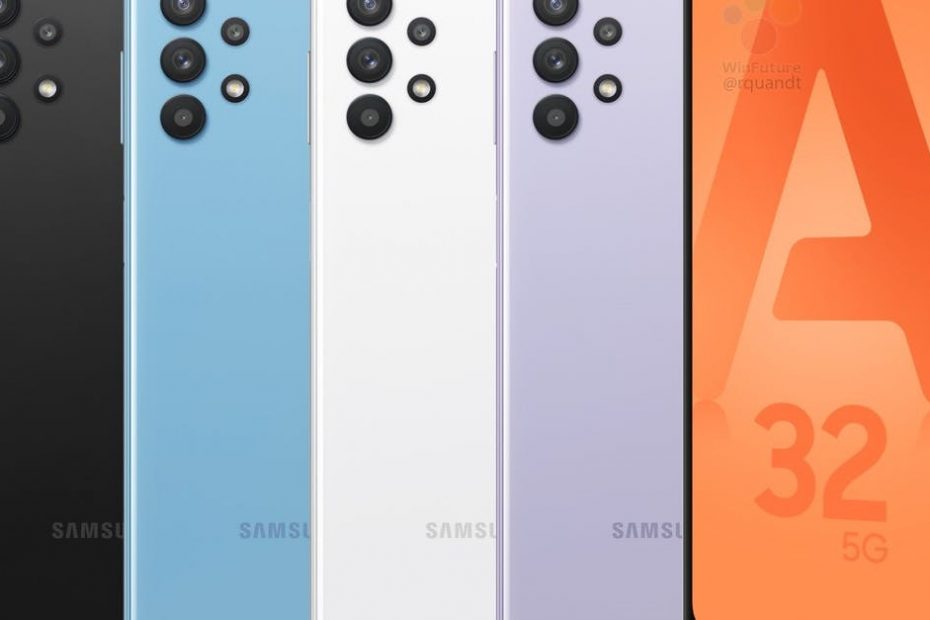 Now that the year has just started, it is time for a new offering in Samsung’s Galaxy A series. The first device that Samsung may introduce is the Galaxy A32. The device was completely leaked on Friday: both images and specifications of the budget phone were released.

5G phones are getting cheaper – where you would have to buy a high-end phone until the beginning of 2020 to enjoy 5G, the offer in the ‘midrange segment’ is starting to expand. Samsung’s cheapest 5G phone is currently the Galaxy A42; In the short term, the device will have to pass on the title to the Galaxy A32, WinFuture reports.

The budget device, which falls under the Galaxy A42, will receive a striking new design in addition to the arrival of 5G, which we have not seen before at Samsung. Instead of a square module for the cameras, each sensor in the design gets its own (excellent) round housing. There are five circles in total, four of which are for the camera sensors and one for the LED flash of the A32.

Details on the camera sensors are sparse, but the main camera is expected to have a 48MP resolution, followed by an 8MP wide angle camera, a 5MP macro sensor and finally a 2MP depth sensor.

In front of the Galaxy A32 we find a 6.5-inch LCD panel with an as yet unknown resolution. There is a teardrop notch for the selfie camera of the phone – it is not yet known what resolution this camera has. What is striking is that the budget phone has relatively thick screen edges, both on the bottom and top of the panel. Whether the screen, as we have seen with the Poco X3 NFC, has a higher refresh rate is still unknown.

Internally, the Galaxy A32 would use the MediaTek Dimensity 720 chipset, which supports 5G networks. Furthermore, there is 4 GB of RAM available with the choice between 64 GB or 128 GB storage memory. It is not yet known which configurations will become available in the Netherlands and Belgium, if the details are correct. It is also unknown whether Samsung would release the 5G variant in the Benelux; According to WinFuture, a 4G version of the A32 is also on the way.

Given that Samsung uses an LCD panel on the Galaxy A32, chances are that the A32 will serve the lower end of the midrange segment. In the more expensive Galaxy A devices, Samsung uses an AMOLED screen, as is the case with the Samsung Galaxy A42 5G.

WinFuture was unable to report details of the Galaxy A32’s launch date, although there is consensus that the device will be launched alongside the Galaxy A52 and A72. Last year, the new A-series devices were launched in early January. It is therefore possible that you will not have to wait too long for the arrival of the Samsung Galaxy A32.