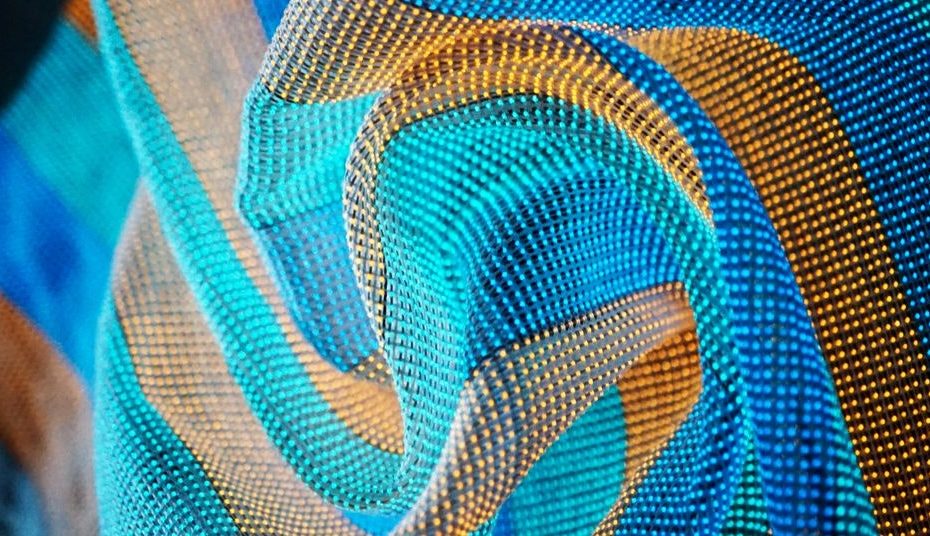 Chinese researchers have succeeded in producing a sheet of fabric that functions as a monochrome display. In the next step, they also want to integrate input methods.

Instead of simply raising your arm on a smartphone to read the latest news directly from your shirt, it would certainly be a comfortable thing. Football clubs could save a lot of money by buying T-shirts that have sponsor advertising, shirt number and player name dynamically taught using fluorescent material. Motorcyclists could use their forearms as a navigation device. Many applications are conceivable for a fabric that functions as a screen.

These are the use cases that the researchers think are obvious. (Images: Huisheng Peng’s Group)

Dot display made of cotton and other fabrics

And indeed, researchers have been working on this pure form of wearable for years. A 19-person research team led by Peining Chen and Huisheng Peng at Fudan University in Shanghai, China has now succeeded in producing a multi-colored piece of fabric measuring 6 × 0.25 meters, equipped with 500,000 light elements and functioning as a point display can.

The piece of fabric should be resistant to crumpling, folding and washing and should not lose its function. The researchers report in a recent article in the science journal Nature.

In it, they specifically describe the production of the luminous substance. Zinc sulfide threads coated with silver are then used for the phosphor. With the addition of cotton, they were woven on a loom as warp threads with weft threads made of polyurethane which had been made electrically conductive by means of an ionic liquid. In this way, a light element was created at each intersection of the threads. The fabric was woven so tightly that the distance between the elements was less than a millimeter.

The individual light elements would not have shone with completely identical strength. The deviation, however, was less than eight percent, which was hardly perceptible as a deviation.

In a kind of endurance test, the researchers crumpled, stretched and folded the fabric up to 1,000 times. The material also had to withstand 100 washing and drying processes. After that, most of the lighting elements continued to work and the brightness was also not significantly impaired.

Colors, keyboards, electricity – everything is possible

In order to differentiate the display in terms of color, the researchers worked with copper and manganese. They used it to coat the zinc sulfide threads, which, depending on the material, set blue or orange accents.

With the combination of zinc sulfide and conductive polyurethane, the researchers believe that keyboards can also be integrated into the fabric. It is also possible to convert sunlight into electricity. Ultimately, such a self-sufficient system of keyboard, display and power supply could be integrated into the clothing – the computing unit is still missing.

The researchers want to find this directly in the brain of the person wearing the clothes in the distant future. Until then, it should be easier to sew a pocket for a smartphone connected via Bluetooth.