One of the post-crisis winners? 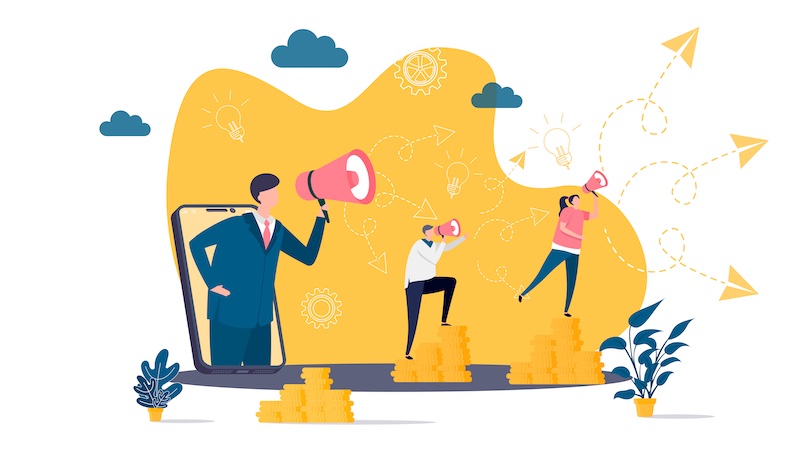 Affiliate marketing could become one of the winners of the crisis in 2023. That was the result of a survey of 1,000 marketers. But what opportunities, risks and challenges are the industry dealing with? We will examine this in a three-part series. Part 1 of 3: Sales forecasts, ad spend and the impact of inflation.

After the pandemic years 2020 and 2021, many had hoped that 2022 would be a calmer and more normal eCommerce year and that the global crises would become fewer. But then in February 2022, with the war in Ukraine, everything suddenly changed. The consequences of the war, increased raw material prices and transport costs, disrupted supply chains and high inflation caused great uncertainty among end customers and advertisers.

Consumer behavior also continued to decline in view of the rising prices. Due to high energy prices and poor economic forecasts, Germans are keeping their money to themselves. According to GfK, the consumer climate in Germany has never been so bad. The forecast GfK index even slipped to a historic minus level in October 42.8 points.

At the same time, inflation in Germany has reached the 10% mark for the first time since the post-war period and is sliding into a recession. Among other things, this has led to waves of layoffs at some digital companies such as Meta, Google, Shopify, Amorelie, Gostudent, Smava, Snap, Patreon and Urban Sports Club.

As a result, companies cut spending primarily where it can be done most quickly, and these are often marketing and advertising costs. The market research company Nielsen reported a significant minus of for September 10.7 percent shown in the gross advertising expenditure compared to the previous year. Above all, the advertising categories of commercials with a minus of 24.2 percent, cinema advertising with 46 percent and TV advertising with 10.5 percent are among the biggest losers.

Jesko Perrey, Senior Partner at McKinsey in Düsseldorf, said in an interview: “Companies will take even more measures that have a clear ROI. You have to square the circle – do more with less”.

A major advantage of the affiliate industry is therefore that past crises have shown that advertisers have increasingly focused their marketing strategy on performance marketing channels in difficult times, as they receive measurable results there with which they can measure the success of their advertising measures can understand directly.

In addition, sales can be secured while costs are controlled at the same time, while classic media budgets are often cut. The “German Digital Advertising Latecast 2022“, which the Omnicom Media Group created for the fourth time in 2022, showed that despite the current inflation, affiliate marketing in particular grew by 14.81 percent to an advertising volume of 1.55 billion euros in 2022.

In 2021, this was still 1.35 billion euros. According to this, affiliate marketing accounted for around 10.5 percent of the total advertising market in 2022. The forecasts for affiliate sales for 2022 are also around 18.02 billion. Euro.

But how will affiliate marketing develop in 2023? In order to take an objective look at the further trends and developments, we have, in cooperation with the performance marketing agency xpose360 and the AffiliateBLOG.de again this year, a major trend survey was conducted among 1,000 affiliates, merchants, agencies and networks / technologies.

In addition, we asked important experts in the industry about their expertise in order to get an independent picture of further developments, independent of our own opinion. According to the new Affiliate Trend Report 2023, the industry participants also see the development over the past year as extremely positive, even if the growth rates were lower than in previous years.

After the advertising market had recovered so quickly in 2021 and early 2022 despite the corona pandemic, the Ukraine war and now the direct course into recession due to the rising inflation rate caused the next setback.
Rising interest rates and prices, delivery bottlenecks and energy shortages are having a negative impact on the economy.

Nevertheless, despite the turbulent times, the digital advertising market grew according to the “German Digital Advertising Latecast 2022“ of the Omnicom Media Group to 14.76 billion euros. The Central Association of the German Advertising Industry (ZAW) also estimates that the entire advertising industry in Germany 48.66 billion euros is growing, which corresponds to growth of 2.8 percent and is above the level of the pre-crisis year 2019 for the first time in three years. Above all, the disproportionate growth in digital advertising is decisive for the gains.

ZAW President Schubert is forecasting a difficult year for 2023. The first half of 2023 in particular should be difficult in view of the budget cuts that have already been announced, also because the general economic situation remains tense. From the second half of the year things could ease up and improve, provided the geopolitical situation and the economy improve.

Affiliate Marketing 2023: The digital market as an important growth driver

The GroupM “This Year, Next Year” forecast also hopes that the digital market will be an important driver for German advertising spending in 2023 and a growth of eleven percent.

Nevertheless, the sustained shift of marketing budgets to the digital channel and the continued investments in the digitization of processes in sales and marketing could represent fundamentally good framework conditions for the online industry.

However, it is currently difficult to make an exact forecast for the coming year, as a lot depends on further developments in the Ukraine war and the associated energy crisis.

For example, sales in the Tradedoubler affiliate network on Black Friday including Black Weekend and Cyber ​​Monday in the DACH region by a whole 30 percent be increased. The mass of customers who were forwarded to the advertisers was also more than 50 percent higher than in 2021. In the global Tradedoubler network, growth of 20 percent in sales and 5 percent in sales was generated compared to the previous year will.

Significantly higher shopping baskets than in 2021 were also generated in the Awin network. In a year-on-year comparison, the AOV increased by a whole 27 percent increased will. On Cyber ​​Monday even by 33 percent.

A successful year even without Black Friday

Regardless of Black Friday, 2022 was a successful year for market participants. For example, Tradedoubler’s global sales for the first three quarters of 2022 increased by 17 percent to SEK 1.17 billion (Swedish Krona) in sales, and gross profits also increased by 21 percent to 244 million.

SEC. Technology vendors like Impact also reported 35 percent year-over-year growth in partner payment processing volume in their 2022 annual report. And on the Admitad network alone, orders in 2022 increased by 52 percent compared to 2021. 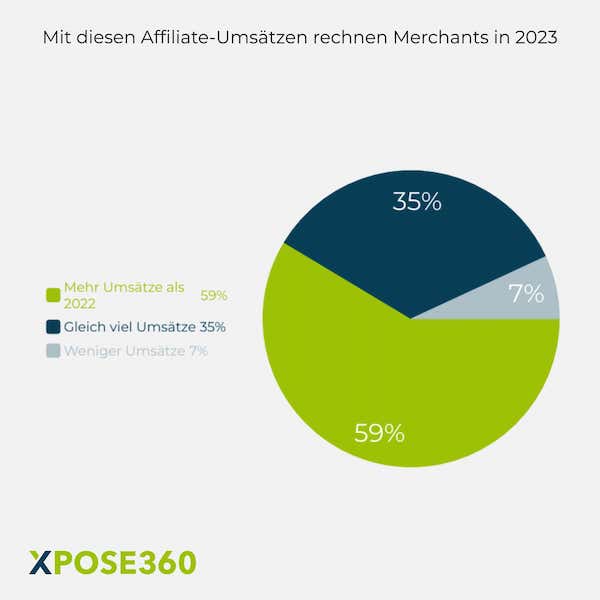 This is certainly also due to the fact that 70 percent of advertisers expect that the affiliate channel will increase in priority in the company over the next five years due to the performance approach. Affiliate marketing is already important or very important in the online marketing mix for 83 percent of companies. 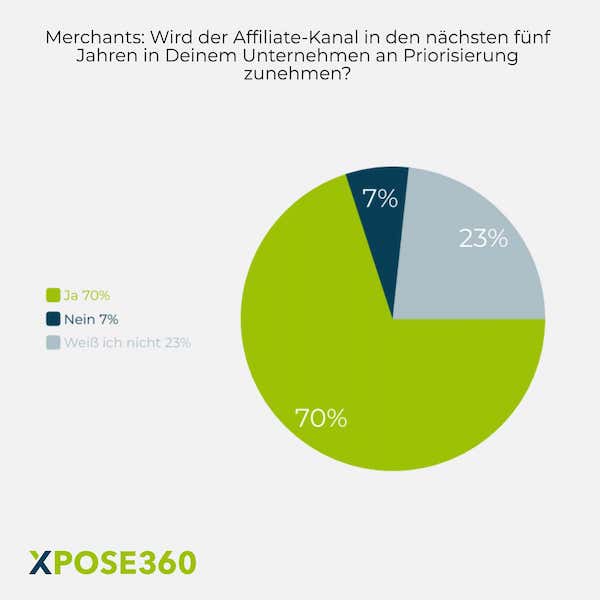 Affiliate marketing could be among the winners of the 2023 recession

Also according to one Survey by UK service provider Adtraction along with seven affiliate networks, revealed in October 2022 that 82 percent of respondents plan to spend the same or more on affiliate marketing in 2023. In addition, the affiliate channel is important for 68 percent of those surveyed in order to achieve their marketing goals.

Impact of inflation/recession on the affiliate industry 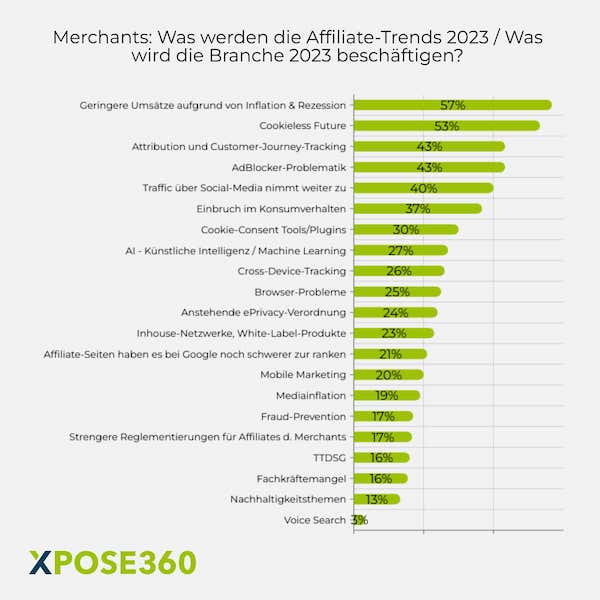 If you look at the economic forecasts for the coming months in general, this is not particularly surprising. According to a GWA agency survey conducted in October 2022, almost 48 percent of those surveyed expect business development to stagnate in 2023. A good third assesses the situation rather or very pessimistically.

80 percent of those surveyed are already experiencing budget cuts or are confronted with corresponding announcements. The fact that inflation has already had a negative impact on sales for 52 percent of advertisers, 56 percent of affiliates and 39 percent of ANT also creates a subdued mood.

The majority of industry representatives expect the economic situation in Germany to improve from mid-2023 or as soon as the Ukraine war is over. In addition, the CPC costs at Meta and Google are becoming more and more expensive due to inflation.

In the second half of 2022 in particular, persistent inflation led to a strong supply overhang on the US advertising platforms. As a result, prices continued to rise sharply. The social ads agency Zwei Digital has determined that the sales events in Q4 2022 and the Christmas business alone can be expected to increase CPCs by around the previous annual high of around EUR 0.58.

At the beginning of 2022 alone, Meta’s costs rose by almost 9 percent. According to the Affiliate Trend Report, affiliate marketing is a good alternative to the GAFA platforms for 29 percent of advertisers. For another 54 percent, the various advertising channels complement each other well. 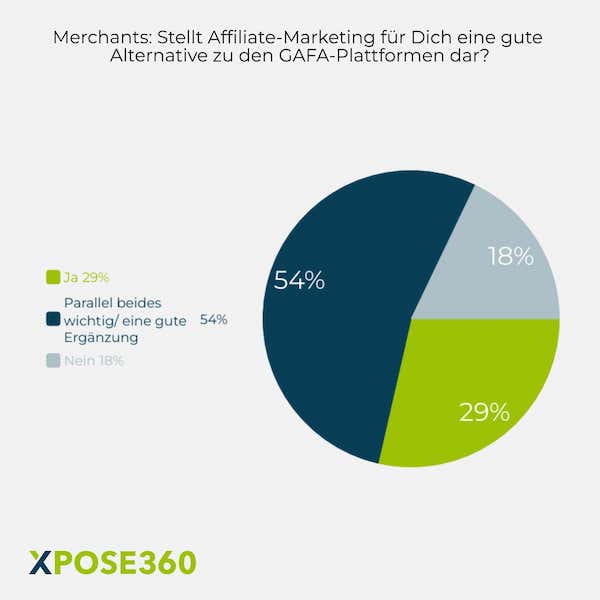