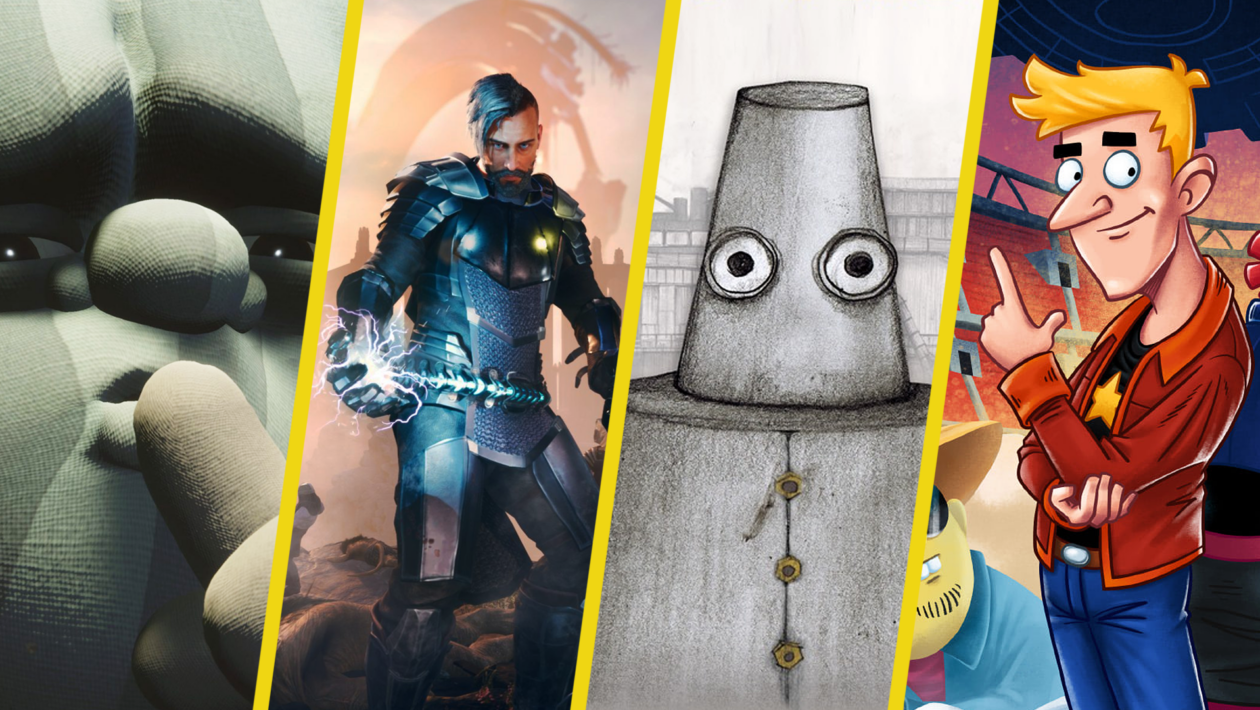 The year 2022, like last year, promises a number of interesting domestic games. That’s why it’s out of the question at the beginning of the year to remember which games players and fans are very much looking forward to, but it’s also worth noting games that haven’t paid so much attention to yet or know, but it would definitely be a shame to miss them. So let’s take a look at what awaits us this year in our game meadows and groves.

The seventh part of Poldy is undoubtedly one of the most anticipated games ever, which was proven at the time when the game launched its campaign on Hithit or when the demo version was released. The game was originally scheduled to be released at the end of 2021, but was eventually postponed to the first quarter of this year. Fans have to wait a while for Pankrác’s next adventure, but the development is really at the finish line, which can be seen in our recent interview with Petr Svoboda, after which a pre-sale was launched in December. This time, together with Pankrác, who was of course again taken over by Luděk Sobota, we will look at the Celebritycon festival and his latest case will revolve around a mysterious alien machine. Like the sixth part, the play relies on the artistic style of Karel Kopice and Czech dubbing, to which Jiří Lábus, Bohdan Tůma, Valerie Zawadská and others were invited again.

There has been a lot of talk about The Last Oricru, formerly LostHero, from the GoldKnigts studio, especially on the occasion of the name change and the patronage of the game by the publisher Koch Media and their label Prime Matter. The studio has expanded, the game has grown, but it is still true that it is an RPG combining sci-fi elements with the medieval world, which also makes extensive use of dialogues and many decisions that can change the whole story, which the game has presented more than once. The exact release date has not yet been set, but it is known that the game will be released digitally and physically and on PCs, Xbox Series and PlayStation 5.

Game 1428 also succeeded with its campaign in Hithit, and at Christmas it offered preliminary access to a full-fledged demo version, which can be attended by all contributors with the rank of crossbow and higher. The demo offers about an hour of play and introduces players to most mechanisms. However, those who are waiting for the full game will not wait too long, as they have to arrive this year. Then there will be nothing to prevent everyone from going to 1428 and being able to take part in Hussite campaigns in Silesia. The game presents a linear story, challenging puzzles and fights, boasts interesting low-poly graphics in isometric style and even offers Czech dubbing for our people.

During this year, around February or March, another highly anticipated game is to enter the preliminary approach, namely the sequel to the legendary Bulánky from 2001. They also drove the Czech Internet crazy with their crowdfunding campaign last year, when they selected the required 500,000 in Startovač in two hours from publication and eventually the amount climbed to an incredible CZK 7,308,770, which made Bulundy 2.0 the most successful project in the platform’s history, but also significantly changed the original development plans, as additional elements needed to be added. The developers are currently estimating the duration of early access at 10 months and will include the first three playable environments, team play and, of course, deathmatch. All this is complemented by the first excerpts from the history book and a little story. In the full game, players will be able to look forward to a story campaign with accompanying videos, a variety of game modes, a map editor, customizations, Bulgarian history and much more. However, it is not yet determined when the feathers will start flying in bulk.

The robotic bureaucracy was supposed to experience hard times last year, but in the end it did not. This year, however, it is supposed to shake to its foundations, as the pencil-drawn action Silicomrades is heading for its release date, which is to be April 29 (or after the approval of the robobyrocracy, as the developers humorously add). Behind this 2D couch or online cooperation shooter is the Outside the Fox studio, which operates under the auspices of Charles Games and was originally established at the Faculty of Mathematics and Physics of Charles University. It was there that the original prototype Silicomrades was created, which also won the student prize of the Czech Games of 2019, on which the developers continued to work and continue to work to this day. But we will soon be able to see how their work has gone and try to overthrow the evil bureaucracy in the robot uprising. ‘

Fragments Of A Mind

We will look into a strange dream world in an action top-down adventure with RPG elements called Fragments Of A Mind, already in March 2022. In addition to the beautiful environment and magical graphics, the game also attracts an engaging story in which there will be no shortage of twists and turns. Kassandra needs help to see her lost memories so she can escape her horrible dreams. In this, even the players will try to stop her from enemies, for which it will be necessary to use strategy and observation, or they can escape instead of fighting. Perks and benefits will also help, and the game is adapted for more demanding and occasional players, so that everyone can come up with their own. Peter Kováč from the LoneWolf Games studio is behind the game.

This strategic animal adventure is to see the light of day this year. As the name suggests, we find ourselves in a chicken empire in a medieval style. This is not twice as pleasant a place for life for the animal inhabitants, but in the case of the main character, the weasel, a lot will change when his frog friend is kidnapped. Therefore, he sets out to save her and discover the intricate background of what is happening in the hen’s realm. The story is told in a playful and humorous form, the game abounds in hand-drawn graphics and, on the contrary, lacks violence, so it is also ideal for children, but it will undoubtedly practice logical thinking for everyone. The game is developed by the Fairy Snail Games team, which benefits from experience from student projects and custom creation. The prototype of the game could be tested in the game zone on Anifilm, otherwise the developers regularly stream and inform fans about the progress of development and let them see its background.

And because there are never enough animals, we still have the game FixFox, which until recently was called SPACR. The main heroine is the fox mechanic Vix, who lands on an unknown planet in deep space. The game somewhat unexpectedly combines space engineering with good food. Although the purpose of the game is primarily to explore, correct and adjust, it is always necessary to make time for a hearty meal, even with friends. Vix can enjoy soups, rice or puddings, for example, which is quite possibly more interesting than the 8-bit pixelart graphics. Jaroslav Meloun from the Rendlike studio is working on the game.

The Ghost Studio operating under FaVU BUT (Faculty of Fine Arts of the Technical University) has another impressive title ready for publication. Unlike Rag, however, this time they embarked on a first-person sci-fi logic game, the prototype of which, called Enclosed, was originally created as part of Ludum Dare (47). Since then, it has been reworked, adding not only content, but above all the discovery of a suitable audiovisual site. The release of the game on Steam was originally announced for 2021, but in the end it was moved to an unspecified beginning of 2022. At this time, however, it is possible to try a demo version, the PC version should also follow the console and VR.

And we have another sci-fi here, this time from Vladimír Kudělka from the Hangonit studio, the author of the surreal first person adventure Rememoried, which was awarded the Czech Game of 2015 for artistic contribution. Here, too, it is obvious at first glance that Kudělka’s next project is embarking on experimental, even philosophical waters, but this time everything is processed from the perspective of a third person. In the role of an astronaut, the player not only has an adventurous journey, but a truly impressive audiovisual experience. The boundaries between parallel worlds are breaking, so the game offers more than one unconventional look. Afterglitch was originally scheduled to be released last year, on December 6, but the release date was postponed to this year’s unspecified date.

We leave the purebred sci-fi universe and look at the steampunk world, but post-apocalyptic. Devorian: Left Behind is an episodic game, with the release of the first part scheduled for this year. The story of Amber and her animal companion Monty, not only about survival, fear and humanity, takes place in a gradually crumbling mechanical world, in which the secrets of the past need to be revealed. Of course, this world can also be discovered and explored through Monty’s eyes – it is possible to get to know other inhabitants and find out how they view what is happening around them.

Thus, at the beginning of the year, it is of course difficult to predict how many more games will appear or which will receive their release date. There is no doubt that much more awaits us. Even so, there are still a few titles over which question marks hang. Half a year ago, Ondřej Švadlena confided that he would like to release his horror game Beware this year, so we’ll see if it really works out. Eva Nečasová should still work with the artist Petra Valouchová under Charles Games on The Legend of the Spirit Bird, but even after a year, no new information is available. Tycoon iCorp was originally supposed to enter early access at the end of the year, but it will not happen until the end of 2022. An uncertain fate accompanies the last part of the Life Not Beautiful series, subtitled The Last Execution. In this case, it has been published several times and has been completely silent recently. And we can also think, after all, about the game Matcho by Fiolasoft, which first appeared briefly during the CZ&SK Gamesweek Showcase Direct with the promise that it will be presented more extensively in the near future. However, this year’s Czech offer of games does not end there, but at the moment we have no choice but to wait for everything to come.