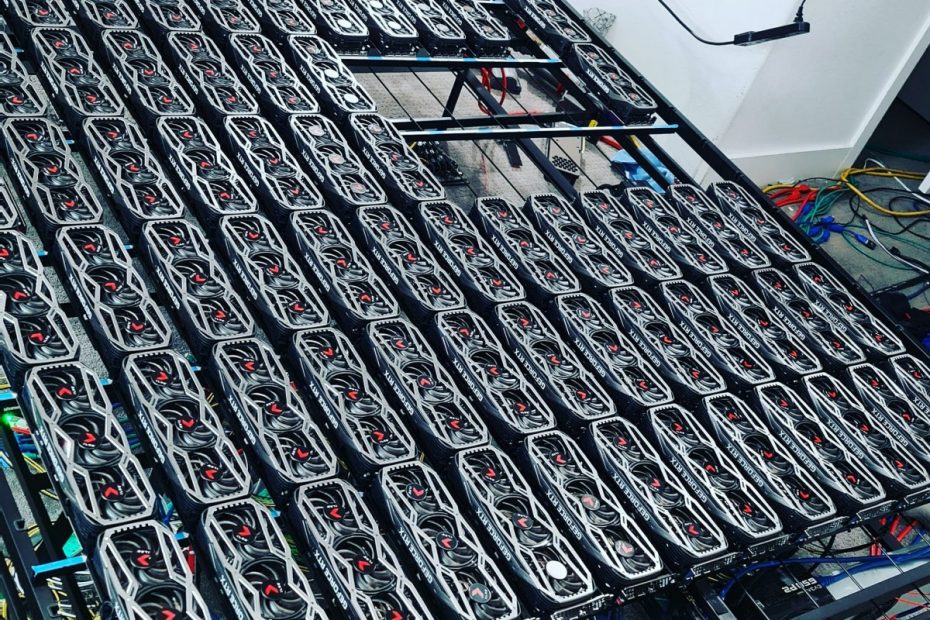 Given the sharp rise in prices, crypto mining seems to be worthwhile again for individuals – at least if you have some know-how and can get the hardware cheaply.

The prices for cryptocurrencies such as Bitcoin or Ethereum, which have skyrocketed in the past few months, have not only attracted numerous investors recently, but are also apparently reviving the mining business. Because of the high power consumption and the acquisition costs for the necessary hardware, large mining farms in countries with low electricity costs have recently taken over the mining of digital currencies. Now individuals also seem to be able to earn money again.

The US miner Simon Byrne claims to have a mining rig with 78 current – and in high demand – graphics cards (Geforce RTX 3080) Installed. There are also 65 more Geforce GPUs (RTX 1080 Ti) from an earlier installation. In total, Byrne reportedly makes around $ 900 a day with it. So, says Byrne, he can have the costs for the installation back in just 50 days – if the Ethereum rate remains at the current level.

For observers it is particularly questionable how Byrne was able to get hold of 78 of the Geforce RTX 3080. The graphics cards, which are popular not only with cryptominers but also with gamers, are currently mostly sold out. On Ebay and other sales platforms, instead of the official price of 699 dollars, they often charge well over 1,000 dollars. Byrne explains that he did not get the graphics cards from official dealers.

The Techarp blog has recalculated oncehow much costs and income Byrne could have with just the 78 Geforce RTX 3080 GPUs. First of all, around $ 55,000 for the graphics cards, assuming the official price. According to Techarp – and according to the calculator Cryptocompare – the pure income from mining Ethereum should amount to just under $ 13,000 per month. A hashrate of 83.57 MH / s is assumed. Techarp has calculated the energy costs at 8.43 cents per kilowatt hour.

Investment within a few months

According to Byrne, electricity costs only five cents in winter. You also have to factor in the cost of cooling the system. According to his own statements, Byrne uses an exhaust fan for a few hundred dollars. The energy costs should therefore amount to a maximum of $ 1,500 per month. Means: Reinstalling the 78 Geforce GPUs could bring Byrne a monthly net income of $ 11,500. In this case, he would have the investment back in less than five months.

To be Example shown via Facebook With all 143 GPUs, Byrne states a hashrate of 9.67 GH / s in total, with a power consumption of almost 28.5 kilowatt hours. That would be again according to Cryptocompare a return, minus the electricity costs for the graphics cards, of $ 20,000 per month possible. However, if electricity costs rise, the hardware costs more and / or the Ethereum price drops drastically, income could decline significantly.