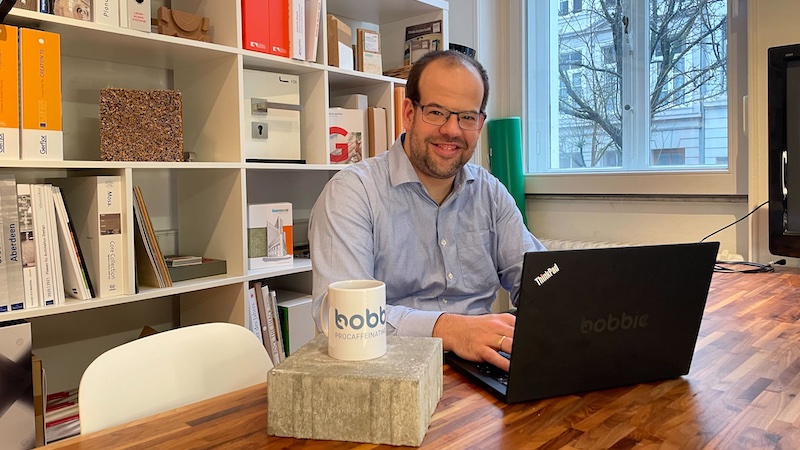 In the “Homescreen!” series, we present the homescreens of people from the social media, marketing, media and tech industries – including app recommendations and tips. Today: Alexander Gran, founder and managing director of Bobbie Germany GmbH.

I’ve been a smartphone user for about 20 years, starting with Palms (I loved my Treo!) and Nokia Communicator. But I never thought it was particularly hip, just immensely practical in my job. Without my email inbox, which is also my to-do tracker, I’m completely helpless.

Instead of the traditional home screen, I use Nova Launcher (for Android), a highly customizable home screen replacement. I find it a lot cooler than the actual Android setup. Due to the good sorting function, I currently only use one page, I need all other apps so rarely that the search function is enough.

“Good” basics instead of default mode

Instead of the standard Android weather app, I use it Buien alarm (for Android), the Dutch rain radar, this is also available for my hometown Aachen. Buienalarm is super precise and can often predict the rain with an accuracy of two to three minutes. Alarmdroid (for Android), or as my daughter says, “The Little Green Robot”.

Alarmdroid is my favorite alarm clock, which also tells me in the morning how rainy it is going to be. I hate getting up, so having a good alarm clock homescreen is very important! As a calculator I use RealCalc (for Android) because I can’t stand the standard calculator. Even in the free version, he can calculate the dots before the line and convert them into numerous units.

For my appointment planning I use the Business Calendar Pro (for Android) as an agenda widget. I can only recommend this to absolutely everyone, because the app is simply super clear, can display several calendars at the same time (e.g. from my co-founder Tim and I) and leads directly to navigation and video conferences. I use telephone and contacts via DW contacts & telephone (for Android), which is significantly more powerful than Android’s default dialer.

As an IT specialist and admin of our software solution, there are of course apps for cyber security (for Android) on my smartphone. Below that is the password tool lastpass (for Android), which we use company-wide. If you don’t have a password manager yet, get one. I think LastPass is good, Bitwarden should probably go too.

I can urgently do one Yubico 2-factor authentication (for Android) with which we additionally protect ourselves. This also works with the mobile app! Also the Hubspot app (for Android) I installed. Although it is not suitable for daily, intensive work, since the large-format web interface is required here.

But to check something quickly, the app is really very useful. I mainly use the classics for communication gmail (for Android) and Google Meet (for Android), also of course Slack (for Android).

For me, the latter is an app that could be significantly improved (keyword: background synchronization!), but which is indispensable for my daily work. In the field of social media I use Facebook (for Android) and Instagram (for Android)but mainly LinkedIn (for Android), where I also regularly publish articles.

I find it very relieving that there are now so many digital offers for financial services. It does very well, for example, using company issues Pleo (for Android) even if the app sometimes feels more like a beta than a final version. the Sparkasse app (for Android) convinces me very much, the S-ID check app is annoying, but what can you do.

I also use various apps for travel including, unsurprisingly, Google Maps (for Android). Because the railways are currently remodeling everything in terms of software, I have both the DB Navigator (for Android) for the train journey as well as the separate one BahnBonus app (for Android) downloaded.

The e-scooter provider animal (for Android) I use it more often than I want. Whether it’s stress or laziness, I can’t quite separate. For me, the most useful app in the mobility sector is Paybyphone (for Android), because it helps to make the Aachen park chaos a little more bearable (but it can also be used in many other cities).

When I can’t walk to the office, the app really comes in handy as we can only park there for two hours thanks to the city’s poorly planned ticket machines. The app then reminds me of the end of the two hours, which saves me a lot of money.

With the Solarman app (for Android) I can check the production and consumption of our solar system at any time while on the go. You don’t really need it, because I can’t change anything about the yield of the solar system at home anyway, but it’s helpful for peace of mind. An absolute lifesaver for all parents, however, is the app Baby Monitor3G (for Android).

It offers live video transmission and is available cross-media for iOS and Android. The distance is unlimited and can send via WLAN or via LTE or 3G as required.

Last but not least, our delivery note app (for Android), with which we completely abolish the paper-based delivery note. It is currently still in the beta version, but will be completed in early 2023.

Alexander Gran is the founder and managing director of Bobbie Deutschland GmbH. He can look back on a long career in the IT industry and has implemented and managed many international digitization projects in the areas of CAx and mobility.

His positions include the Fraunhofer Society, MTU Aero Engines GmbH and IVU Traffic Technologies AG. Since 2017 he has been working together with co-founder Tim Kuhlmann and the Bobbie team to bring the building materials trade into the 21st century.