The social business Fairphone is stepping up and announcing a new model with the Fairphone 4. The new smartphone looks more modern than its predecessor and, according to the manufacturer, is the “world’s first electronic waste-neutral 5G smartphone”.

Two years after the Fairphone 3 (test) and one year after the introduction of the 3 Plus, which was primarily a camera update, the Dutch social business has announced a new smartphone model. Like the previous devices, it has a modular structure, can be dismantled into its individual parts and repaired by the user himself. In addition, Fairphone promises a five-year update guarantee.

Fairphone 4: Fairer and more sustainable than its predecessor

As with the previous models, the focus of the new model is on obtaining resources from fair sources and building a holistically sustainable smartphone. The company has once again expanded its previous efforts with the new generation.

The Fairphone 4 in gray. (Photo: Fairphone)

According to Fairphone, the list of fairer trade materials for the development of their smartphones has been expanded to include six components. According to the manufacturer, a total of 14 key materials would now have to come from sustainable and fair sources for the production of the new model. For the Fairphone 4, there are Fairtrade-certified gold, aluminum from suppliers who are certified according to the Aluminum Stewardship Initiative (ASI) performance standard, fair tungsten from Rwanda as well as recycled tin, rare earths and plastics. According to its own statements, Fairphone is the first smartphone brand whose back cover is made from 100 percent recycled polycarbonate. 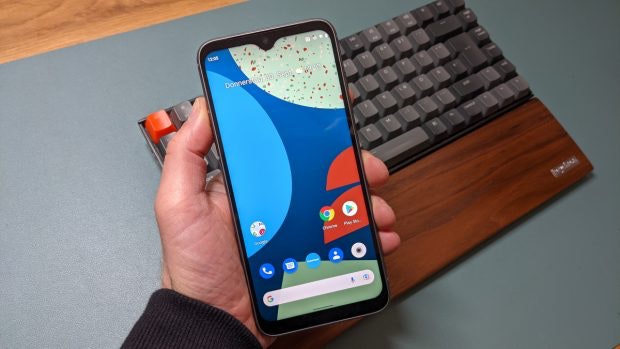 Aside from the fairer traded and mined raw materials and the associated improvements in working conditions and wages, the Fairphone 4 is the “first electronics waste-neutral 5G mobile phone in the world”. According to the manufacturer, this means that “for every Fairphone 4 sold, the company recycles one mobile phone – or the same amount of electronic waste – responsibly”. Alternatively, the production of a new phone is prevented by overhauling an old device for every Fairphone sold and thus being able to be used again. According to Fairphone, the devices used for the recycling program come from Fairphone’s European take-back campaigns or from countries without an official recycling infrastructure. The latter would be brought to Europe for environmentally friendly recycling.

Not only the sustainability and fairness aspect has been expanded by social business, the new smartphone model also looks more attractive than its predecessor. The new model feels of higher quality than its predecessor, which is partly due to an aluminum frame with rounded edges but also to a generally improved finish and design. 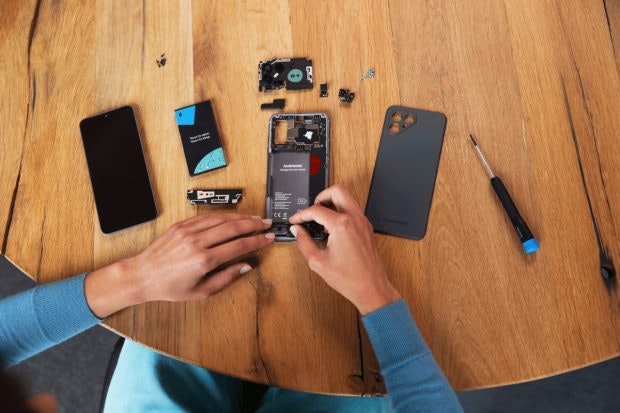 The Fairphone 4 can be unscrewed with a Phillips screwdriver. (Photo: Fairphone)

The LC display of the Fairphone 4 has a 6.33-inch diagonal and has a Full HD Plus resolution (2,340 x 1,080 pixels) and is protected with Gorilla Glass 5. The frame around the screen is not as narrow as on the models of the competition, but thanks to the modular structure, the display can be replaced by yourself – a replacement screen costs just under 80 euros. All the user has to do is loosen eight screws. Despite the fact that it can be dismantled, the device offers protection against splashing water in accordance with IP54.

In addition to the display, seven other components can be replaced by the user. This includes the USB-C port, the speakers, the earpiece, the 3,905 milliampere-hour battery, as well as the back and the two camera elements on the front and back.

For the processor, Fairphone relies on a Snapdragon 750G chip, which can be classified in the upper middle class and is also used in Samsung’s bestseller Galaxy A52. The system-on-a-chip is supported by six or eight gigabytes of RAM and 128 or 256 gigabytes of flash memory, which can be expanded using a micro SD card slot, depending on the version. According to the manufacturer, it is possible to swap the SoC for another if necessary. 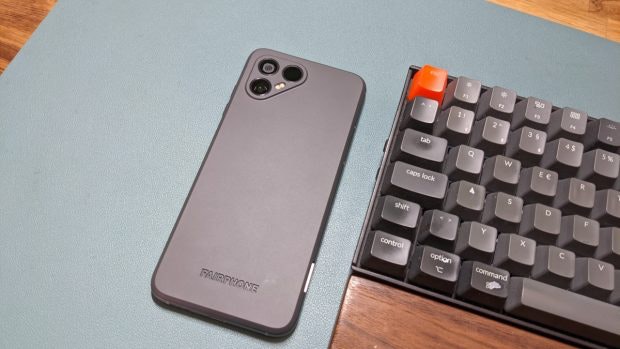 On the camera side, Fairphone has also improved its new model: the rear main camera has two 48-megapixel sensors (Sony IMX582 sensor) for wide and ultra-wide angle shots with f / 1.6 and f / 2.2 aperture, optical Image stabilization and laser autofocus. The ultra wide angle lens has an angle of view of 120 degrees. The Fairphone 3 Plus only had a 48-megapixel sensor with an f / 1.79 aperture installed on the back. The selfie camera in the so-called dew-drop notch, which is more familiar from models from 2019, has a 25-megapixel sensor. 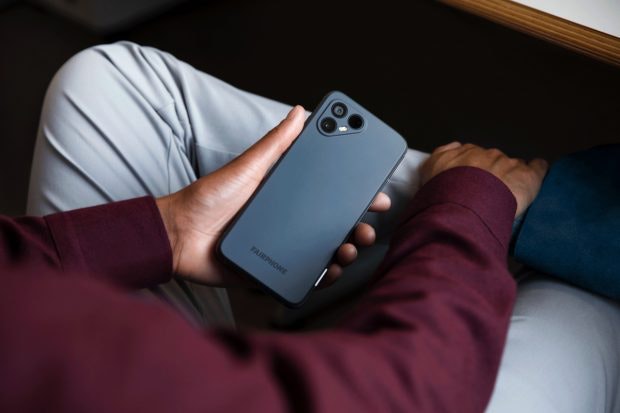 The Fairphone 4 in gray. (Photo: Fairphone)

Dual is also the support for 4G and 5G cellular networks: The Fairphone 4 has dual SIM support, whereby either two physical SIM cards or one physical and one virtual E-SIM card can be used. Next are NFC, Bluetooth 5.1 ,. GPS and WiFi according to ac standard on board.

The Fairphone is not as thin and light as other current smartphones: thanks to its modular design and replaceable battery, the device measures 162 x 75.5 x 10.5 millimeters and weighs 225 grams.

Fairphone with 5 years of Android updates 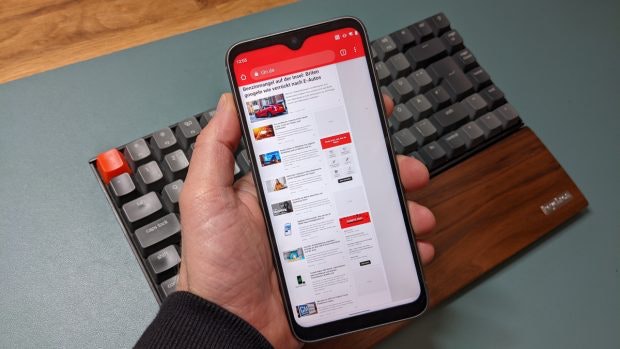 Sustainability doesn’t end with the hardware. Fairphone is also aware of this and is the first manufacturer to introduce a five-year update guarantee “at no additional cost”. This ensures software support for the Fairphone 4 5G at least until the end of 2025 and updates to Android 14 and 15 are guaranteed. According to Fairphone, the support can be extended through the Android updates until 2027 in order to guarantee up to six years of software support.

With this software advance, the manufacturer wants to encourage users to use their devices for longer than the average two years. The company also guarantees long-term availability of spare parts.

Eva Gouwens, CEO of Fairphone, explains the company’s goals for the Fairphone 4: “We’re taking a completely different approach to the manufacture of smartphones – we’re changing the way devices are manufactured and used.”

The device is delivered with Android 11 and should receive monthly security patches for the first two years. Fairphone has not revealed exactly when the update to Android 12 can be expected. However, there are signs that the company wants to improve its update strategy, which has been rather sluggish up to now. In addition to Google’s Android, the software partner wants to launch another version of the Google-free OS / e / -OS to offer.

How expensive is the Fairphone 4 and when will it be released? 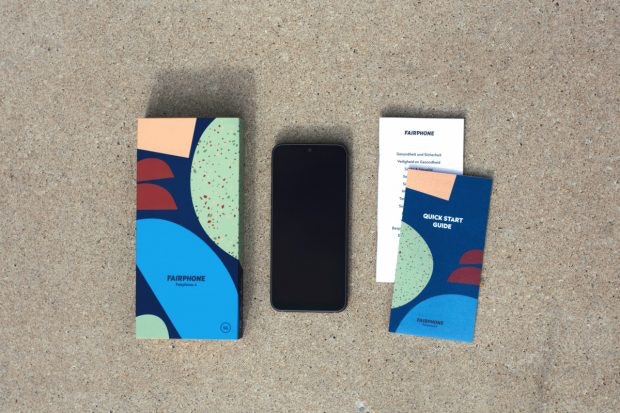 The Fairphone 4 with box and scope of delivery. (Photo: Fairphone)

The Fairphone 4 won’t be the only product this year. The company plans to introduce further accessories shortly – these include wireless headphones, which are made from 30 percent recycled plastic and whose supply chain also includes Fairtrade Gold.