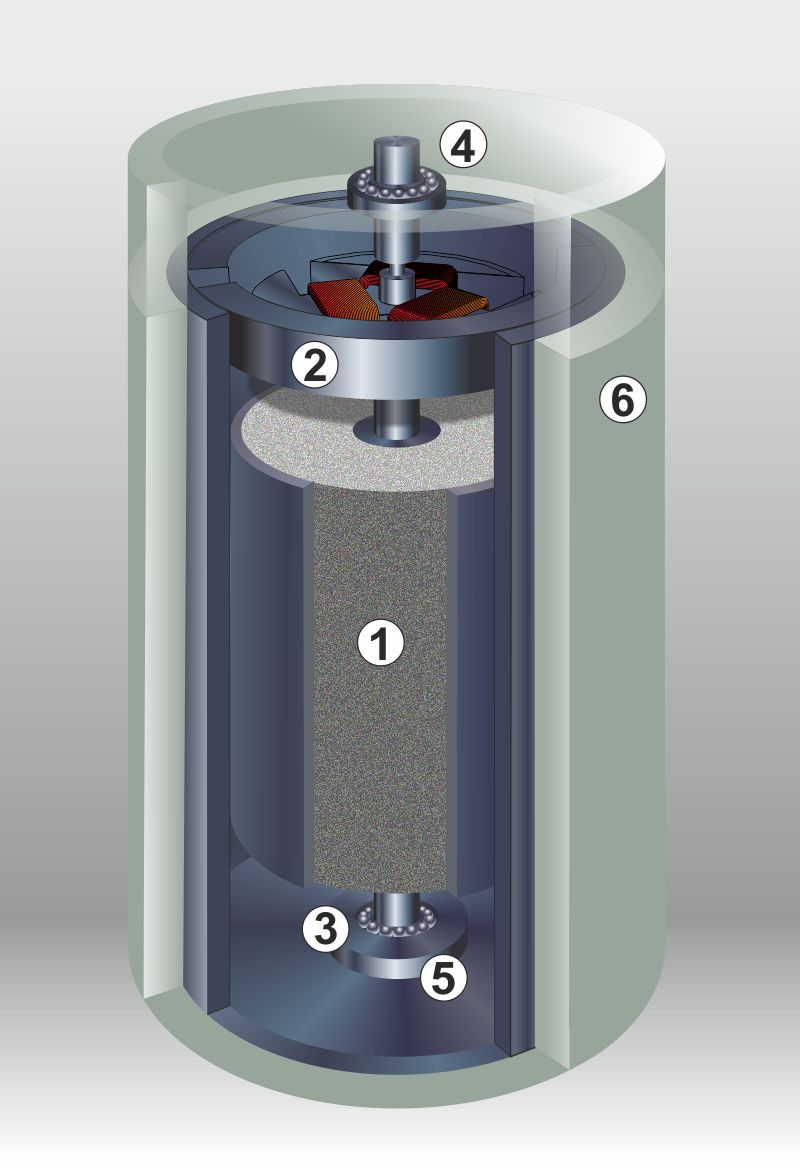 With Energiestro’s flywheel you can even go completely off-grid in tropical countries. In the Netherlands this is possible in spring, summer and autumn.

What is a Flywheel?

A flywheel is a mechanical battery in the form of a rotating wheel. The ancient Greeks already knew this thousands of years old invention, in the form of a potter’s wheel. A spinning top is also a flywheel. You can store energy in it by making the wheel spin faster and extract energy from it by draining it. In fact, we live on a huge spherical flywheel: the Earth, which has been spinning for over 4.5 billion years.

Advantages and disadvantages of flywheels

A flywheel has the enormous advantage that you can put energy into it and extract it without loss. A second advantage is that the flywheel can be charged and drained very quickly. They also work at any temperature, you can charge and drain them literally tens of millions of times and you can easily measure how much energy they contain by measuring the rotational speed of the wheel.

So why don’t we have flywheels everywhere, from electric cars to our cell phones? That has everything to do with the disadvantages of flywheels. The first disadvantage is that they store little energy per kilo, on average around 0.01 kWh per kilo. You can store about as much energy in a one-kilo flywheel as in a smartphone battery. Then you no longer have a smartphone, but a backpack phone.

The second disadvantage is that flywheels experience friction and lose energy quickly. The best flywheels, then you are talking about the flywheels that are used on board NASA satellites, for example. These lose about 5% of energy per day.

This makes a flywheel ideal for storing energy in the home for a short period of time. 5% loss, which is less in practice because you use the most energy in the evening, is almost nothing.

For that reason, the French start-up Energiestro of the Gennesseaux couple opted for a flywheel that has the shape of a solid cylinder. They opted for their model VOSS, for compressed concrete, a cheap and easy to process material. They also use ball bearings, instead of expensive, non-contact magnetic bearings.

Their smallest model, which is suitable for households, is one meter in diameter and 1.5 m high. This model, a concrete flywheel in a vacuum chamber, is placed underground. It takes about 10 m2 to install it. You can store a maximum of 10 kWh here.

After 20 years of experimentation, winning many awards and successful field tests, this wheel is finally ready for large-scale production. Initially, they want to install these flywheels in French Guiana and some tropical countries. Some French energy companies also use it to dampen voltage peaks and dips on their network.

Useful for the tropics and subtropics, but also in the Netherlands

This 10 kWh is sufficient for almost every household in Australia or Spain, for example. This is also an attractive option in the Netherlands, because with the help of this flywheel you can buy electricity during off-peak hours and use it yourself. Or can supply back if the electricity is more expensive. The makers claim that they can store energy for 1/10 the cost of other flywheels. That is comparable to a Tesla Powerwall, but a flywheel lasts five times as long.

If you place the flywheel underground, it will not get in the way and you can place hundreds of kilos of heavy flywheels without any problems. This flywheel is turned by solar energy during the day and can drain you in the evening and at night. Ideal, because that way you don’t have to add salt in the summer. If you live in the tropics or subtropics, where there is still a lot of sun even in winter, you can even completely get rid of the electricity grid.

You could also set up local exchanges that are equipped with this flywheel. In this way, they can store the power needs of the local residents and, for example, solar energy supplied during the day, which is then released again in the evening.

The main point of criticism is that it all takes a very long time. They started development 20 years ago and only now is there a product that is being rolled out. There is currently a glaring need for energy storage capacity in Europe. American competitor Amber Kinetics uses steel. His flywheels are already selling for around $325 per kilowatt-hour of storage capacity. It is only a matter of time before they, or the always industrious Chinese, also develop and sell smaller-scale systems for private individuals.

Energiestro claims that they can supply their concrete flywheels for a lower price, but then you wonder why these are not rolled out en masse. After all, they are also jumping for it in France itself.

The second point of criticism is that you have to rent an expensive crane to install these heavy flywheels. These are therefore especially interesting for new construction or renovation projects, where you can install these flywheels in one go.

The third point of criticism is that concrete is a porous material and emits gases. This way little of your vacuum remains, and the friction increases considerably. Hopefully they put a protective, gas-tight layer around the concrete.