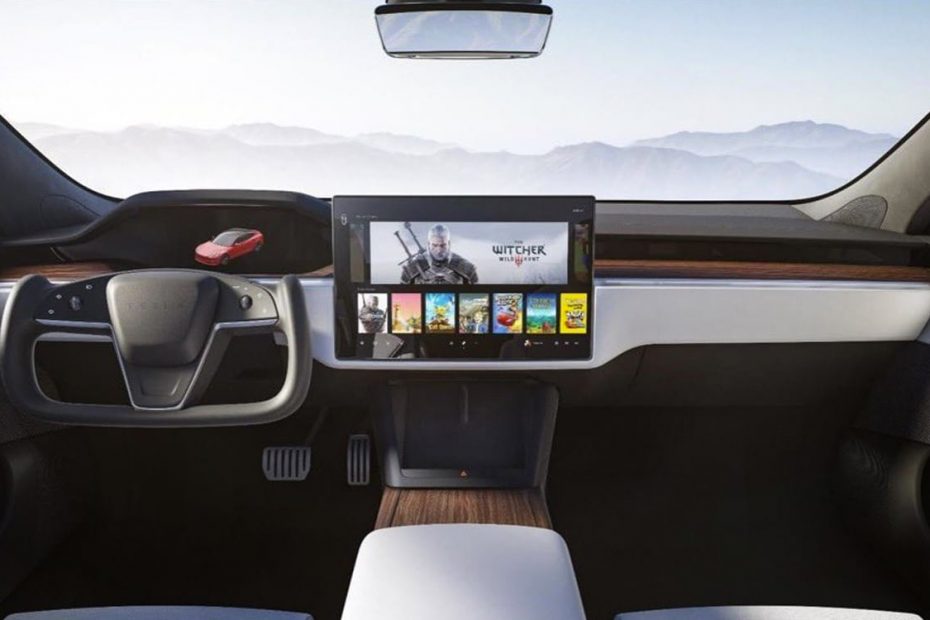 Elon Musk revealed in a tweet that the onboard computer of the new Tesla Model S Plaid will be able to launch Cyberpunk 2077 – before adding that he loves the aesthetics of the game. Following the contractor’s tweet the course CD Projekt’s share rose by more than 13%.

It all started froma tweet from Elon Musk who announces first deliveries of Tesla Model S Plaid to take place next month. The Model S Plaid is the latest revision of the variant. It embeds the latest Tesla battery system which allows it to have a range of more than 840 km. But also a new steering wheel with tactile buttons, and a new on-board computer for infotainment.

Now, in the image shared by Elon Musk, we guess a library of rather beefy games on the vehicle screen. In particular The Witcher 3 Wild Hunt, the very successful title of CD Projekt which is also at the origin of the last Cyberpunk 2077 game-event. This has led Internet users to ask Elon Musk whether the new vehicles console could launch Cyberpunk 2077. We did not necessarily expect the affirmative.

Elon Musk had indeed not hesitated to make fun of the failed release of the game. But it seems that the entrepreneur has in the meantime found a little time to play to the last set of CD Projekt Red, and thathe rather loved it. In the following tweets, we learn that the Model S Plaid console will be able to “Launch Cyberpunk”. And Elon Musk to add: “Besides, Cyberpunk’s aesthetic is amazing. The interior design is👌🏻 ”, without knowing entirely if the 2nd sentence speaks of an element of the game or the interior of the Model S Plaid.

The esthetics of Cyberpunk are incredible btw. The interior design is👌.

I have to say that the makers of CD Projekt Red must have appreciated these positive tweets around Cyberpunk 2077. Since the game’s release, tarnished by a tsunami of bugs and sloppy console versions, CD Projekt’s share price had fallen significantly. However, Elon Musk’s latest comments appear to have resets the studio’s share price on the rise. Elon Musk did indeed publish his tweet shortly before 1 p.m. on January 28.

We can see the studio’s share price going up as early as 1pm, with a trend that remains rather bullish as of this writing. A performance that is to some extent a catching up on reality. Despite the bad press that characterized this release, the launch of Cyberpunk 2077 broke all previous industry records. Over 13 million copies of Cyberpunk 2077 had passed since the game’s release in late December 2020.

CD Projekt Red is also very responsive with very timely corrective updates – which have already put an end to most of the bugs encountered by players.