Demonstration Amsterdam: plans for bridge on the long track 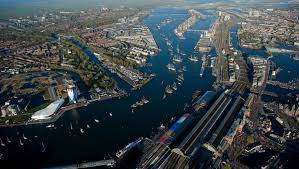 Last Saturday, January 14, a bicycle demonstration was held by the Amsterdam Cyclists Union and the Bicycle Museum, called ‘Sprong over the IJ’. Despite the fact that Amsterdam-Noord continues to grow and the ferries are overcrowded, plans to build a bridge over the IJ on the pushed for a long time. In 2050, Amsterdam-Noord is expected to grow by 43 thousand inhabitants. Read more about the bicycle demonstration in this blog.

Amsterdam is shifting goals in order to complete the budget

Already in 2018 the idea was to build a bridge over IJ. Transport minister Melanie Schultz managed to put a stop to this. As a result, the Java Bridge was put on the back burner. Currently, it is the municipality of Amsterdam itself that is blocking the Java Bridge. The 135 million euros needed for the Java bridge was again held back at the beginning of October to achieve other goals.

During the bicycle demonstration, the municipality was called upon to do something about making a budget available for the ‘Sprong over het IJ’. Together with the company of about 50 demonstrators, a bicycle tour was made at 2.30 pm from the Stadsloket in Amsterdam north to the Stopera. The petition to realize the Java bridge was handed over to the alderman for traffic, Melanie van der Horst.

According to the Amsterdamse Fietsersbond, it is mainly the cyclist who is the biggest loser. Since 2011, the Fietsersbond has been committed to building the bridge. This while the ferries in Amsterdam North are overcrowded. According to calculations, the new Java Bridge would immediately be one of the busiest bicycle connections.

The favorite city bike at the moment is the Pegasus Lucca 3 NL 2023: a very nice city bike and ideally suited for daily rides. Who knows, you may soon be able to cross the IJ by bike with this favourite.

The Pegasus has 3 gears from the Shimano Nexus brand, hand brakes and a luggage carrier with quick release straps. You can easily take a load with you on this number 1 city bike.

Want to know more about this city bike?