Comparison: WhatsApp, Signal, Messenger or Telegram, which one is for you? 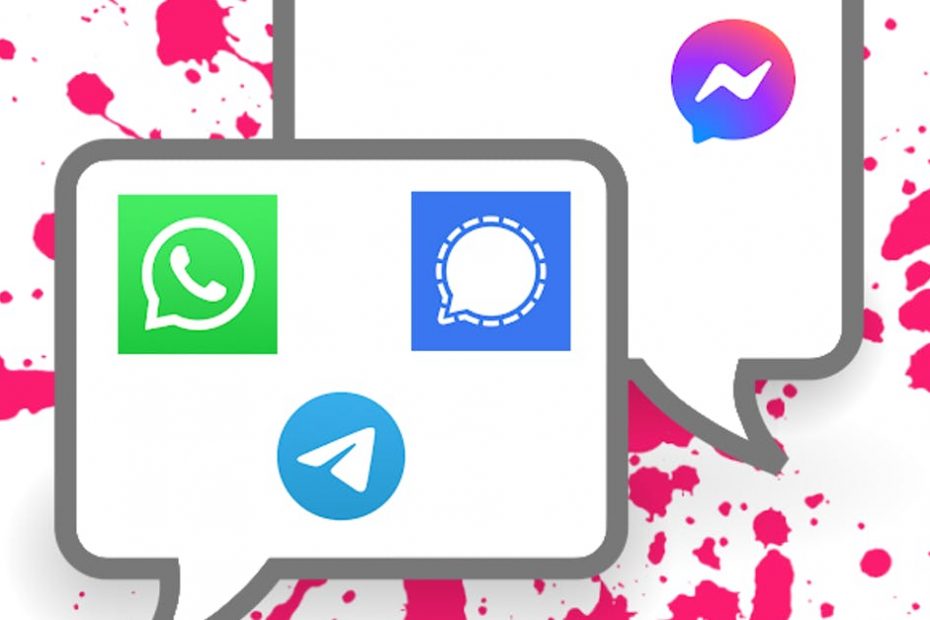 We take a look at the differences and similarities between the main messaging services. Here you will discover a great comparison of WhatsApp, Signal, Facebook Messenger, and Telegram.

The Facebook apps WhatsApp and Messenger are by far the largest messaging services in the world. In addition, you also have major challengers with Signal and Telegram. Both apps recently came to the attention as a result of WhatsApp’s new privacy statement that users bumped into. Telegram and Signal are already focusing on two safe and privacy-friendly alternatives.

Inspired by one recent project from designer and UI designer Patrick Loonstra, we compared these messaging apps on a number of points. In addition to the privacy and security aspect, we also look at other important aspects such as: the supported functions, the user numbers, and supported platforms. In this way, you will discover which service is most suitable for you based on your personal expectations.

WhatsApp is the oldest messaging service of the foursome, and the app was bought by Facebook in 2014. You can still find most of your friends and family members on WhatsApp.

Telegram and Signal saw their user numbers rise sharply in recent days after the announcement of WhatsApp’s new privacy statement. Telegram gained 2.2 million downloads in two days and Signal was up 100,000, according to market research firm Sensor Tower (via Reuters). Telegram and Signal are also the only ones to make their source code public.

The different messaging services each emphasize different possibilities. Messenger has a goal that allows developers to develop their own bots that can serve as a chatbot for customer services, for example. File sharing can be less convenient on Messenger, but you can reach a large group of people if you want to make calls.

Telegram in turn focuses very much on organizing communities with its extensive range of functions for groups and channels. The app also allows you to send large files, but the service still has limited options for video calling.

Signal is the only app that only allows local backups for privacy reasons and there is also no way to share your profile with friends via a link. Furthermore, the app rather follows the line of WhatsApp in terms of functionalities.

Even though WhatsApp allows you to call a larger group of people. By default it is possible with eight participants, but via the Messenger Rooms integration you can choose to call in groups of 50, just like with Messenger. WhatsApp and Telegram are less well suited than Telegram for large groups, because they make phone numbers of users visible at all times. In Telegram it is possible to hide your phone number in a group.

The four messaging apps are available on most popular platforms. Signal is the only one you cannot access from your browser, but the service does so for security reasons. It is remarkable that WhatsApp is making efforts to improve its web version by having it function completely independently of your phone. Telegram and Signal are the only apps that also work on Linux. You can also use all messaging services on Chromebook via the Android app.

The Signal app for macOS

WhatsApp, Signal and Telegram support two-step verification (2FA), which means that an extra layer of security is provided when logging in. This often works with these messaging services in the form of a pin code that you enter to gain access to the app.

These three apps also have end-to-end encryption, that is, conversations are encrypted. If the messages are still intercepted by a hacker, they are in principle unreadable. Yet there is an important difference between the security of WhatsApp and the other two apps. WhatsApp does not make its source code public, so you cannot take a look at how the end-to-end encryption works. This transparency is built into Telegram and Signal.

Example of a WhatsApp security key

Messenger is a special case because the app is seamlessly integrated into the social network Facebook. If you want to use 2FA, this is also done via Facebook. Furthermore, the app does not contain any encrypted conversations by default unless you start a ‘Secret conversation’.

WhatsApp recently announced changes to its privacy statement in which the app announced that it will share data with parent company Facebook. In Europe we are protected by the European GDPR regulations, so there are no immediate changes for us yet. But what is nothing can still come.

Apple recently introduced privacy labels in the App Store that tell us more about the data that messaging apps collect about us and the purpose for which the app collects data. Of all messaging apps, Messenger is clearly the one that collects the most about users and also uses that data to deliver targeted ads.

Signal is the only app that only processes data such as your phone number to make the app function. Your phone number is used, but it is not linked to your identity. Telegram is also one of the better learners, but it does collect information about your contacts.

In addition to these four messaging services, you have many other interesting alternatives. An example is Google Messages, which recently started working for all users with Rich Communication Services, or RCS. This means that the app takes over advanced functions from the other messaging apps, and can also send regular text messages at the same time. Google wanted to make Messages more versatile, just like the popular iMessage for iOS. Messages also has a web app and video calling works through Google Duo. The app still lacks an important function such as end-to-encryption and it does not work on iOS.

Other well-known apps are Viber, which has been around since 2010, The Chinese WeChat, the privacy-friendly Threema and the South Korean app LINE. Which messaging service do you prefer? Does one of these services have a specific function that is decisive for you? Let us know in the comments at the bottom of this article.

WhatsApp is the incredibly popular messaging service that is available for Android, but also for other platforms such as iOS. With this so-called messe ..

Telegram is a messenger that puts safety first. All messages are encrypted from start to finish and the application is lightning fast. In addition, z ..

Signal is an amalgamation of two apps with which you can communicate securely. For example, you can send messages and VoIP, all data is encrypted and the software is …