a (sometimes too) small powerhouse 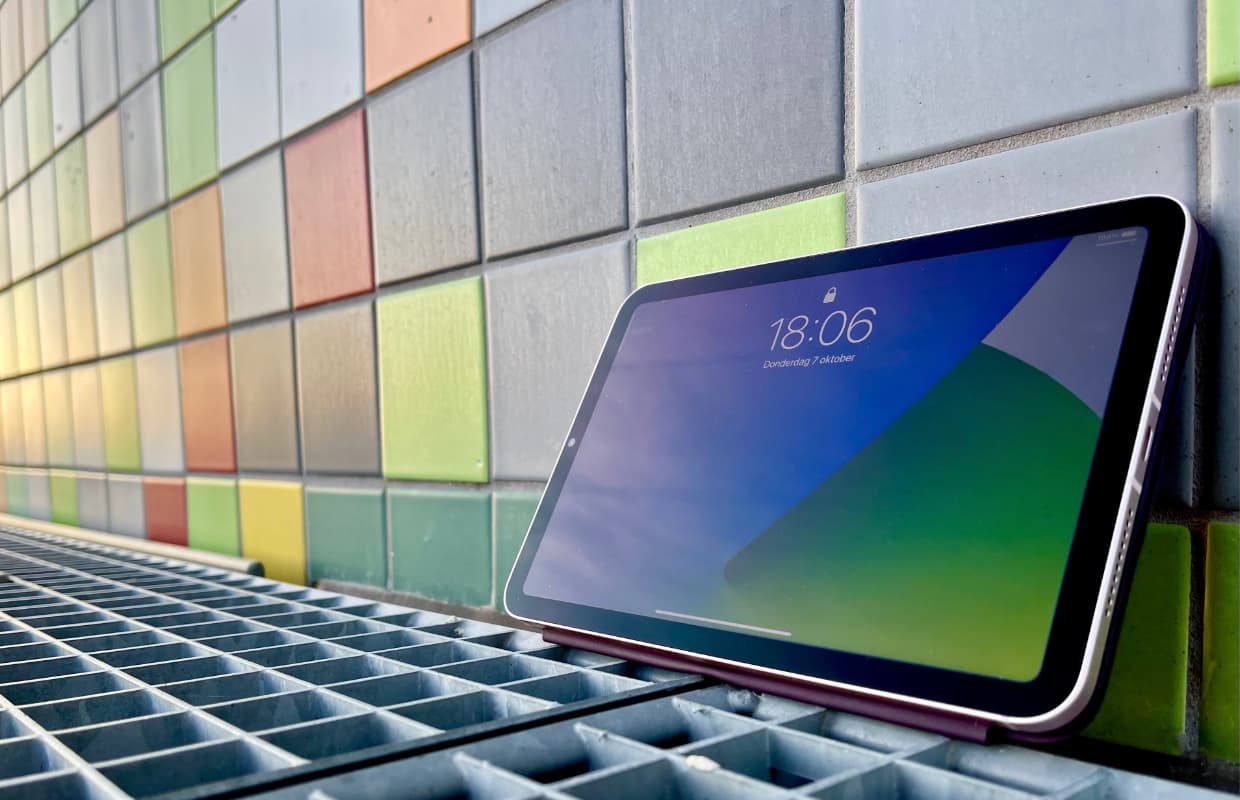 The iPad mini 2021 is Apple’s smallest tablet. Secretly it is a small powerhouse, but sometimes it is just a little too small. Why? You can read that in our iPad mini 2021 review!

There it is: the iPad mini 2021! And he is quite small. But despite its size, the small tablet is very smooth. It also feels nice in the hand and secretly resembles a smaller iPad Air 2020.

The iPad mini 2021 has the same processor as the iPhone 13 and the new design is very nice. The tablet has also received quite a few new features compared to the previous version, the iPad mini 5.

In some cases it is even just a bit too small, especially when you have coal shovels in your hands. If you are looking for an iPad that you mainly want to use for productive business, it is better to choose the iPad Air 2020 or iPad Pro 2021. If you are looking for a handy tablet (possibly for the side), these (minor) disadvantages should not spoil the fun. Time for the review!

The iPad mini 2021 has been given a new design and the design is therefore completely up to date. The previous generation (iPad mini 5) looked quite dated when the tablet appeared. A few years later, the old design is really no longer possible. Apple has done something about that and the new mini looks a lot like a small iPad Air, with its rounded corners and narrow edges.

Another notable change is the home button: it’s gone. Great, then there is finally Face ID on the mini! Well no, the iPad mini 2021 now has Touch ID in the power button. You’ll find that button on the top (when you hold the mini upright). Just like the iPad Air 2020, the fingerprint scanner is now incorporated here. Incidentally, we had the idea that Touch ID on the mini worked just a bit more reliably than on the iPad Air 2020, but Apple has said nothing about that.

Furthermore, the volume buttons have been moved. They were always on the side of the tablet, but can now also be found at the top. This is because you now click the Apple Pencil 2 in the old place of the volume buttons. This happens magnetically, so the Pencil also stays in place when you use the tablet.

The iPad mini 2021 is slightly smaller in size than the previous versions, while the screen has grown. That now measures 8.3 inches, which is just a bit larger than with the predecessor. It had a screen size of 7.9 inches.

The Liquid Retina display has a resolution of 2266 by 1488 at 326 ppi (pixels per inch). The screen is similar to that of the iPad Air, but the mini has more pixels per inch. This ensures that the screen looks a bit sharper than its big brother. Incidentally, the iPad mini 5 also had a pixel density of 326 ppi, but the resolution was slightly lower (2048 by 1536).

Sometimes you notice that that screen is just a tad too small. For example, do you want to type something while holding the iPad vertically? The virtual keyboard gets a little priege-like in this view. Also in other apps, buttons here and there feel a little too small.

Furthermore, the 6th generation mini has a fully laminated display with anti-reflective coating and True Tone for color fidelity. ProMotion doesn’t have the iPad mini, but in practice you don’t notice that much if you don’t have the function on your other devices. Do you have an iPhone 13 Pro or an iPad Pro with such a smooth scrolling screen? Then you’ll see the difference, especially when you put the iPad mini next to it. But you will soon forget the lack of ProMotion when you start working with the iPad mini.

Recently, the news went around that the iPad mini suffers from ‘jelly scrolling’. Apple has said there is no problem at all and explains that this is normal for an LCD screen. When you pay specific attention to it while using it, you sometimes see it on a page with a lot of text. But this didn’t bother me at all during normal use. We were also not bothered by the discoloration and distortion on the screen when touched during our review.

The front camera has received a major upgrade and that is clearly visible during a FaceTime call. The image is a lot sharper and has much less noise in low light. This is due to the 12-megapixel camera with an aperture of f/2.4 and support for HDR. You can also record videos in 1080p (full-hd) with a maximum of 60 fps.

In addition, the mini has automatic image stabilization and (much more interesting) it has Midpoint (Center Stage). This keeps you always in the picture during video calls. This feature is quite ingenious and works very well. Even if you often walk back and forth during conversations, the camera continues to follow you by zooming out or ’tilting’ the image. Even during chats with multiple friends, all for your iPad mini, everyone stays in the picture.

The rear camera has also been overhauled. There is a 12 megapixel camera, but with an aperture of f/1.8. With this camera you can even record 4K videos at up to 60 fps.

Because of the camera upgrade, you can safely use the iPad mini for everyday snapshots. Fortunately, the smaller size of the tablet also means you get fewer strange looks from other people – it could almost be a super-sized phone. However, the iPad mini camera falls short of the cameras of the new iPhone 13 or those of the iPhone 12 Pro (Max). On the mini, the photos are grainier and the colors less saturated.

Like the iPhone 13, the iPad mini 2021 has an A15 Bionic processor on board. There is a small but, however, because the chip in the mini is clocked slightly lower. You don’t notice this in practice, but it is striking. The exact reason is not known, but it probably has to do with the battery life or heat development.

The iPad mini now has a USB-C connection. You can connect accessories such as cameras, monitors and external drives to this. This function was already on the iPad Pro and iPad Air and it is nice that it can now also be found on the mini.

The Apple Pencil 2 snaps magnetically to the side. This detracts somewhat from the portability, because if you have the mini in the bag all day, the Pencil will sometimes come loose. Nevertheless, the Apple Pencil is an excellent addition to the mini. The small screen, with the smaller icons, sometimes even seems made for it. During the review of the iPad mini 2021, we regularly grabbed the Apple Pencil 2 while surfing.

If you want to use a keyboard with the iPad mini 6, you have to rely on third-party products. Apple itself doesn’t have a Smart Keyboard for the iPad mini, and frankly, it would probably be too small to type properly on it. So Bluetooth keyboards from other accessory makers are a better idea.

Or you wait until support for Scribble comes to the Netherlands. This automatically converts written texts from the Apple Pencil to text. This already works remarkably well in other languages ​​and it might also be a nice reason to write something ‘by hand’ more often.

The iPad mini 2021 comes in a WiFi variant and a version with cellular (mobile internet). It has support for WiFi 6 and 5G. This is the first iPad mini with 5G.

With a full battery, the iPad lasts about ten hours, according to Apple. If you just surf the internet a bit and watch YouTube, you can indeed get about ten hours of iPad fun out of it. Do you do heavier tasks, such as video editing or gaming on Apple Arcade? Then the mini has to be charged a little faster, but then you will get about eight hours out of it.

The new iPad mini (6th generation) has been in stores since September 24. The tablet is available in pink, starlight, purple and space gray with a capacity of 64GB and 256GB. You have to buy an Apple Pencil 2 separately and you will lose 135 euros for that. The suggested retail prices of the Apple iPad mini 2021 are as follows:

The iPad mini 2021 is a great tablet. In fact, it’s the best iPad for ‘on the go’, if you already have a larger tablet. But with that conclusion you do this cute iPad short. It’s the perfect tablet for anyone looking for a smooth iPad to carry around.

Sometimes you notice that the iPad mini 2021 is just a little too small. The virtual keyboard, for example, sometimes feels a bit priege-like. You also notice this in some apps, such as Procreate, where you actually want to draw a little more screen surface. Also in iMovie the frames are now very small and you have to scroll a lot.

Do you have an iPad mini 5 or older iPad? Be sure to check out the new mini. It’s faster, looks modern and is great for surfing, gaming and watching movies. It’s good enough for productive tasks, but if you want a tablet specifically for those tasks, you’d better look at the iPad Air or iPad Pro. Those are a bit more expensive though.